This example shows you how to control an LED on (or attached to) a Simblee board from your smart device. We'll be using an LED connected to pin 2; this is provided for you on the SparkFun Simblee Breakout Board. If you're using the SparkFun LilyPad Simblee Board, there is an LED attached to pin 13, so you can change the led variable in the code to reflect that. For the RFDigital Simblee Breakout, you'll need to connect an LED to a pin of your choice and change the code accordingly.

This example shows not only how to structure the code, but also how to use the "switch" and "button" objects, and how to add an event trigger to an object that doesn't normally have it.

Here's the complete listing of the code; it can be downloaded from the GitHub repository directly or from Github as a zip file.

Once the code is loaded, you should see this in the Simblee app: 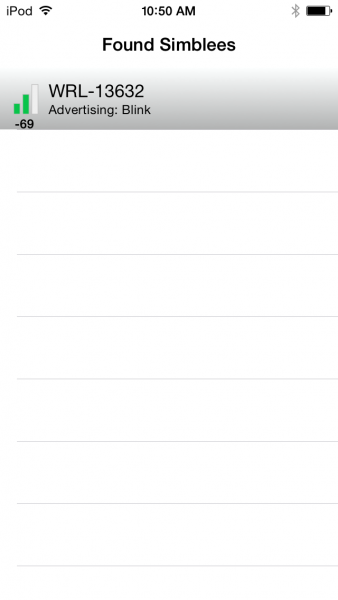 Touching the listing for the Simblee we just programmed will bring up the application interface we just specified by programming the module with the code above: 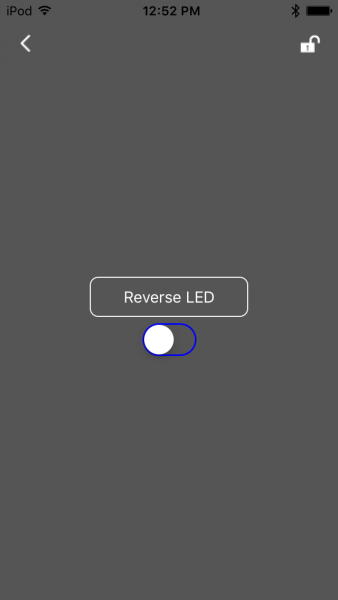 As you can see from playing with it a bit, toggling the switch on the app turns the LED on and off, and pushing the button reverses the current state of the LED until it's released.

Warning: If you've used Arduino boards before, you're probably used to connecting LEDs to the pins as output signals. A normal Arduino can light up many LEDs at once, and several per pin; for the Simblee, you shouldn't try more than ONE per pin, with an additional recommendation of don't try to turn on more than three at a time across all pins. The processor inside the Simblee module cannot drive enough current to light up more LEDs than this (pg 9 of the Datasheet).

If you decide to drive multiple LEDs, try using a transistor as a switch.

For controlling loads with the pins, try looking at some of these transistors:

This is the SparkFun MOSFET Power Control Kit, a breakout PTH soldering kit for for the [RFP30N06LE](http://www.sparkfun.com/…

MOSFETs are awesome. They're like a switch that you flip electronically! This SparkFun MOSFET Power Controller makes it easy …

This is the BC337, an NPN silicon BJT (Bipolar Junction Transistor). This little transistor can help in your project by being…