This page is intended to provide a reference to the various commands that are provided in the Simblee libraries. While we will try to provide examples of as many of these as possible, this list will give a strict explanation of each function.

Strictly speaking, SimbleeNonBLE isn't really a library; it's created as a library folder to provide example code for Simblee devices that isn't specific to using the Simblee as a BLE device. Thus, there's no need to include "SimbleeNonBLE.h" in any of your code files (indeed, the file is empty). However, there are some functions that are likely to be useful that can be found in the examples folder in this "library".

If anything is different to what you'd normally expect on a "standard" Arduino board, we'll mention it here.

The SimbleeForMobile library implements the functions necessary to draw objects in the Simblee for Mobile app. This code is resident on the Simblee module and is uploaded when the module connects to the mobile device; it can be cached on the device to reduce load times for future connections.

These four functions must be in every SimbleeForMobile sketch for it to work. The first two must be called and the second two must be defined.

These two functions must be defined in your sketch for it to work; add them to the sketch below setup() and loop().

All of these configuration variables must be set before calling SimbleeForMobile.begin()

Certain events (apart from UI events on the host device) will cause a callback function to be activated. Here's a list of those functions; to use any of them, define them in your sketch below the four standard SimbleeForMobile functions.

Now for the good part: how to draw a UI on the host! These functions may be called at any time, in any function; if you call them during the ui() function call, however, they will only be sent once, on connection, which makes the bandwidth usage lower.

It is possible to use the device in either portrait or landscape mode. The mode is selected when SimbleeForMobile.beginScreen() is called. More on this below.

Bookending your UI items with SimbleeForMobile.beginScreen() and SimbleeForMobile.endScreen() within the ui() function allows the Simblee app to determine what portions of the UI the user expects to remain fixed. Anything not between those two function calls will not be cached on the host device and will be reuploaded at every device reconnection.

A note about colors: many of these objects accept one or more parameters of type color_t. color_t variables contain red, green, blue, and alpha channel information, and are returned by the functions rgb(redVal, greenVal, blueVal) and rgba(redVal, greenVal, blueVal, alphaVal). There are also some pre-defined macros for certain colors: BLACK, RED, GREEN, BLUE, YELLOW, MAGENTA, CYAN, WHITE, GRAY, and CLEAR. 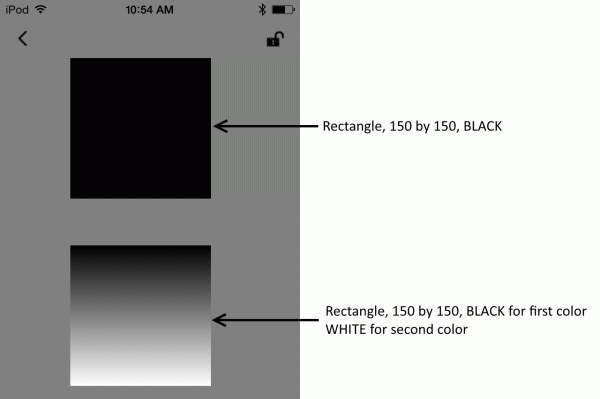 The simplest object that can be drawn in the UI is a rectangle. Parameters are the x,y coordinates of the upper left corner, x and y dimensions, and color. If so desired, a second color parameter can be passed, and the rectangle will be colored as a gradient from top to bottom. 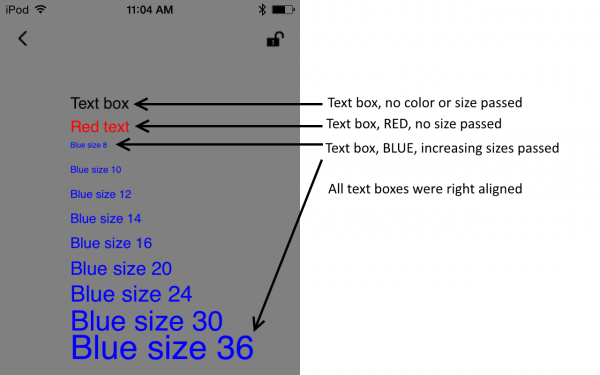 Text boxes can be either numeric or alphanumeric. They are created via overloaded calls to the SimbleeForMobile.drawText() function; height is automatically calculated. Text cannot be made bold, italicized, etc, but the size and color may be altered, and alphanumeric text boxes may contain multiple lines of text (by inserting '\n' characters in the string). Text boxes may only be used for user input by detecting a touch, like a button; for user text value inputs, see "Text Fields", up next. 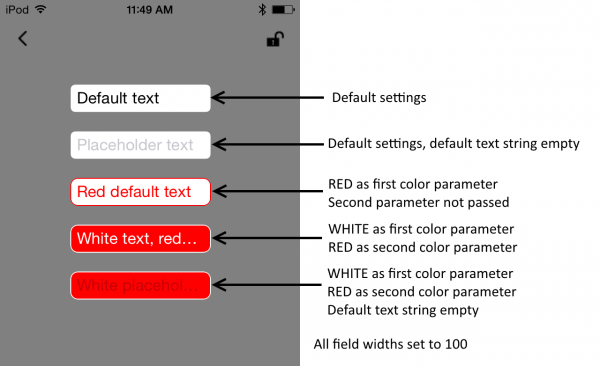 A text field is intended to receive user input in the form of a string or number. Unlike text boxes, width is not automatically calculated and must be supplied to the function after x and y are specified. After width is the last mandatory field, a string which will be the default value upon launch of the script. This string can, of course, be empty, if you don't want to display a default value. Optional parameters are placeholder text, which appears whenever the text field is empty (including when the default text string is empty), color, which is the text color, and background, which is the color of the background inside the field. For a numerical text field, instead of a default string, a default value is entered; however, this means that the placeholder text will never be visible in a numerical text field. Numerical text fields will also cause the keyboard to be brought up in a numerical mode, but the input is not constrained to numbers.

Buttons are the simplest default interactive UI element. Unlike text boxes, they can have a specified width, and the title will be centered inside the button. The background of the button is always clear; the text can be colored. The type argument can be either BOX_TYPE or TEXT_TYPE. 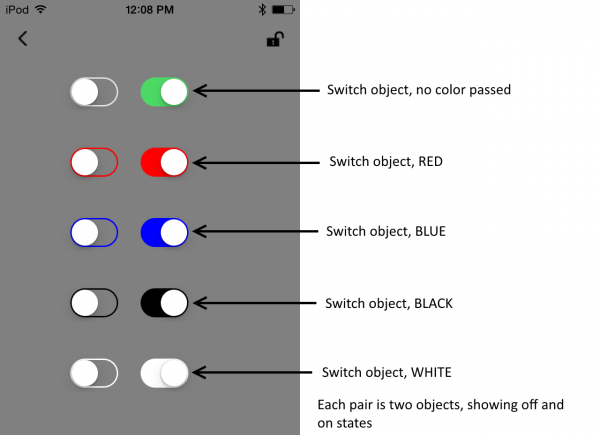 Switches are on/off toggles; the only valid parameters are location and color. They will change to a more subdued color variation when off. 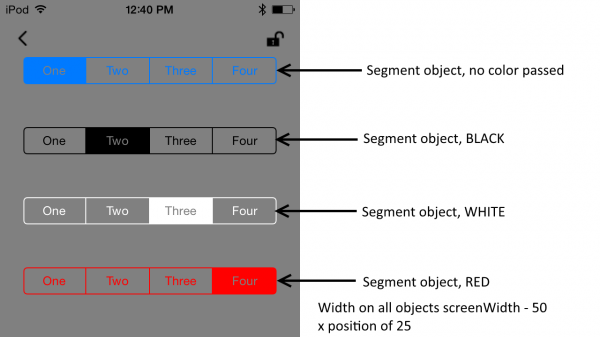 Segment objects are a "choose one" option. Aside from the x and y location parameters, the overall width (w) of the object (not of each segment!), the name of a const array of const char\* objects, the number of desired segments (i.e., the number of objects in the array), and, optionally, the color of the object must all be provided. 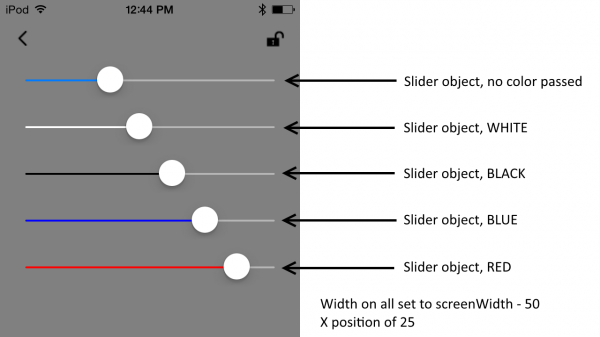 For gross adjustments of value (speeds, volumes, etc.) where absolute actual values aren't of great importance, a slider is probably the best choice. Parameters are x and y position, width of the object, minimum and maximum values, and, optionally, color. 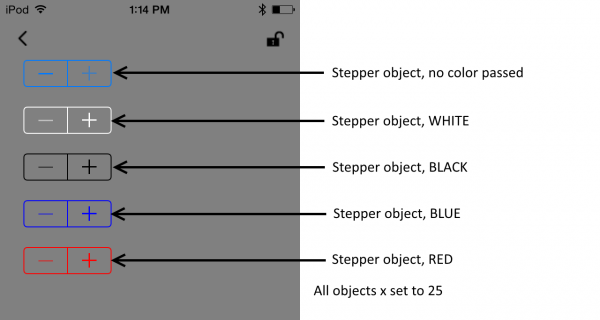 For fine adjustments, a stepper object may be more appropriate. Each press of either of the buttons of a stepper object increments or decrements a value, accordingly; the user may hold the button down to continuously increment or decrement. A textField object should be used if the current value is to be displayed, as the stepper has no means of display itself.

Note that the w parameter is unused and may be set to any value.

It is possible to include custom images in your Simblee UI; this is not recommended, however, as the image will be stored in the Simblee firmware as a full-size PNG bitmap image meaning that even relatively small images will take up a large chunk of the available code memory in the Simblee. We're not going to go into the full process for doing this; it would take up too much space in this already-large tutorial.

To encode an image, you'll need a program called "xxd". This program will convert a PNG file to a .h file; that file must then be moved into your sketch folder.

Up to 31 images may be stored in this fashion. For an example of using this functionality, see the "Temperature" example included in the Simblee support package.

It's possible to update the position, width, height, and the color(s) of an object after it is created. Most objects can be updated using one of these functions; the id parameter is the value returned by the function called to create the object.

textBox and textField have their own specialized update functions which can only be applied to them:

Finally, any object can be shown, or hidden, by using the setVisible() function. Passing true makes the object visible if it is hidden.

Whenever a UI event occurs, the ui_event() function is called. You can specify what an event is using the setEvents() function.

The events parameter is the logical OR of the constants EVENT_PRESS, EVENT_DRAG, and EVENT_RELEASE. When an object is touched (EVENT_PRESS), dragged, or released, ui_event() is called. Within ui_event(), information about the event is contained in the event object:

For image objects, there are two additional event types: EVENT_POSITION and EVENT_COLOR. These behave as the others, but indicate that the returned information is one of the following data chunks.

This library controls the more basic elements of the BLE interface: advertisement, iBecon functionality, data transfer, and proximity, for example. You'll need to add #include <SimbleeBLE.h> to the top of your main sketch file to use any of these functions. This is fairly low-level stuff and is not needed to use the Simblee to communicate with the Sibmlee phone app; however, you will likely need it to develop your own phone application.

Some of these things can be useful even when interfacing with the Simblee for Mobile app.

If you wish to set any of these variables, you must do so before calling SimbleeBLE.begin().

Simblee modules can also only function as peripheral devices, not central. Also, you must not exceed 9600 baud during BLE mode; failure to adhere to this will actually lock up your sketch.

These functions and variables control the connection to a host device. Most of these can be ignored for interoperation with the Simblee mobile app; however, the functions called on connection and disconnection may be useful.

These variables must be set before calling SimbleeBLE.begin().

These functions send various data types back to the host. Again, note that this mechanism is not required when dealing with the Simblee for Mobile app.

iBeacon is a protocol developed by Apple for making BLE devices that can be used to transmit small data packets to nearby devices. iBeacons are one-way; the receiving devices cannot communicate back to the iBeacon devices.

As with the advertisement variables, these must be set before calling SimbleeBLE.begin().

SimbleeBLE.iBeaconUUID -- array of 16 uint8_t values comprising the UUID to be used in iBeacon mode.