Working with MIDI messages directly is much easier if you have a strong grasp on using binary operators to manipulate bytes. You can use bitwise AND and OR operations to mask off the status bit, and extract the channel nybble value. Bitwise-shifts are useful to manipulate the 14-bit bender data.

The code snippets below were written for Arduino. You'll notice that bytes are transmitted using the Serial.write() method, which transmits the raw binary data, rather than converting it into a string like Serial.print() does. We're also using the Arduino-defined byte data type, which is defined as an unsigned 8-bit value. This allows us to properly access the status bit, whereas the char type is signed -- doing binary operations on signed values sometimes leads to subtle errors in the manipulating the MSB.

The software examples below are intentionally incomplete, as we'll introduce a more complete and user-friendly option below.

To send a MIDI message, simply send the appropriate bytes in the right order.

System Realtime messages are the easiest to send, just feed the byte to the output.

Channel messages are a little more complex. To form the first byte, you'd set the MS nybble to the status value, then subtract one from the channel, and put that value in the channel nybble. Send the first byte, then follow it with the appropriate number of data bytes. This snippet also includes running status -- the sender keeps track of the last status byte sent in a global varible.

Finally, sending system exclusive messages requires sending an identifier and data payload that are both of variable length. It must begin and also end with the proper status bytes.

Receiving and parsing the incoming MIDI stream requires more sophistication. While features like running status, implicit note off and active sense are optional from the sender, the receiver needs to be prepared to deal with them.

A simplified finite state machine for parsing MIDI is shown below. 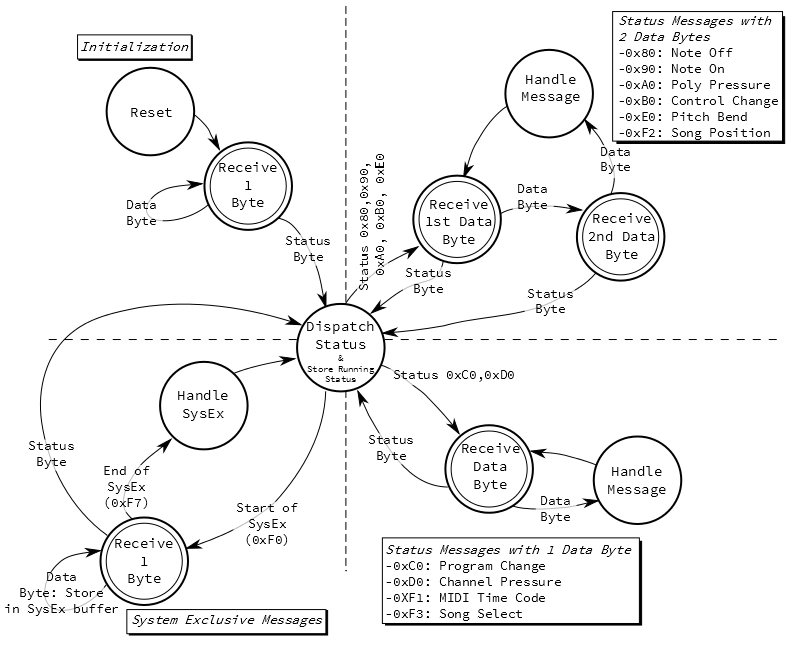 There are a few things to note

You'll notice that all of the "receive bytes" states are illustrated with a double-circle. This is shorthand for more sophisticated behavior. As we discussed previously, system realtime bytes can occur at any point. We could be expecting the velocity byte of a Note On message and get a clock byte instead. The clock is allowed to non-disruptively interrupt the parsing. The details of the receive states are shown below. 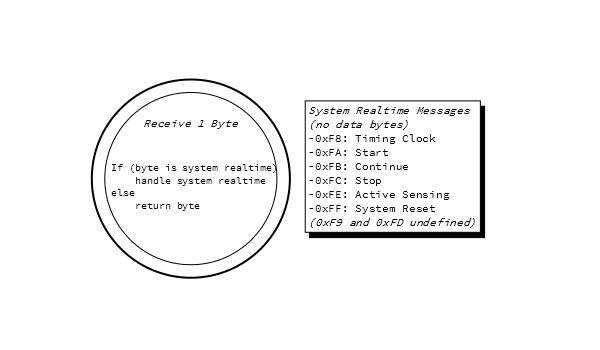 From the perspective of the parsing FSM, system realtime bytes don't count as data or status bytes, they just get handled as they arrive.

The diagram shown above illustrates how to decode the bytes in the MIDI stream, but it doesn't make any implication about how the receiver will respond to them. The verb "handle" is intentionally vague, as each type of device might respond differently.

The FSM above is pretty complicated. Writing and debugging it means developing a pretty serious piece of software.

But there's an easier way. Github user FortySevenEffects has written an Arduino MIDI library that makes reading and writing MIDI messages much easier. The library is flexible, and it can be configured to fit different applications.

It also has detailed documentation in doxygen format.

For some practical examples that demonstrate this library, take a look at the hookup guide for the SparkFun MIDI Shield.

Devising Your Own Implementation Chart

In the messages section, we discussed the MIDI implementation chart. If you're implementing a MIDI device, you should consider writing your own chart, so you know what messages to handle. Most devices won't implement every message, and for messages it does implement, it may still choose to ignore some. For instance, a tone generator will handle note on and off messages, but only those on its MIDI channel. For statuses that are not needed, you can simply discard the messages.

If you elect to discard messages, it's advisable that you still handle the System Reset message (0xff) - it's used as a "panic switch" in situations that you need things to be silent, ASAP!