Now that we've looked at the types of devices that offer MIDI, and the messages they use, let's look at some of the ways they can be deployed.

The simplest connection topology is the daisy chain, where one transmitter is connected to one or more receivers.

If the module is multitimbral, it can be set to respond on several MIDI channels, allowing the player to switch between sounds by changing the transmission channel.

We can add more downstream modules using the thru ports on the interceding devices. Thru transmits a copy of the messages received by the in port. 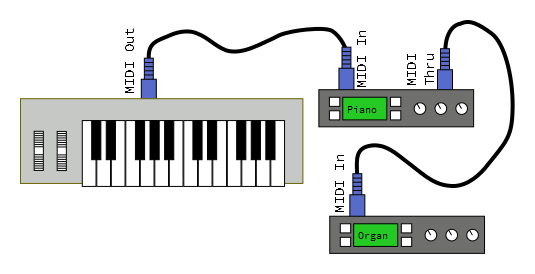 Depending on how the controller and modules are configured, there are several possibilities.

In this example, we want to build a percussion ensemble by connecting drum machines together.

Clocks may be transmitted while stopped -- this allows tempo indicator LEDs to continue flashing at the correct rate.

The last topology we'll look at adds a personal computer in the middle of a daisy chain. 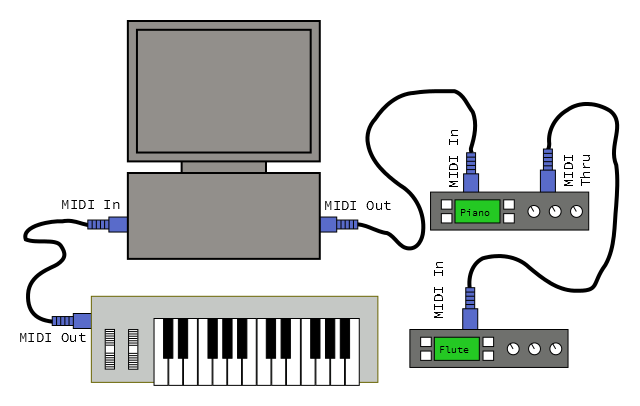 The MIDI controller keyboard is connected to the computer, and the sound generators are connected downstream from the computer. Adding a computer in the middle of the chain allows a lot of power and flexibility. MIDI sequencer software allows the user to record performances from the controller, play them back on the sound modules, and edit or arrange them into songs. Sequencers usually have tracks, which allow multiple performances to be layered. The construction of such a layered performance is known as overdubbing.

While the sequencer is recording, it receives note on and off messages from the controller. It stores them in memory, simultaneously transmitting them to the sound modules, so the performer can hear what they are playing.

During playback, the MIDI controller is unused, and the computer plays the recorded messages, again triggering the tone modules.