The path MIDI is on has forked. The first branch keeps the message format of MIDI but transports them with newer technologies. The other branch opts to invent technologies that address the bottlenecks we explored in the last section. Below, we'll touch on some of the more prevalent technologies from both branches.

USB was intended to replace the confusing array of ports on the back of older PCs. At one time, each peripheral attached to a PC used different connectors; the keyboard, mouse, modem, printer and joystick all had unique plugs. USB was designed as a single hot-swappable connector that could serve all of those functions. USB became commonplace in the early 2000's.

In addition to the preipherals mentioned above, the USB specification include a device class for MIDI ports.

At around the same time, Firewire (AKA IEEE-1394) was also deployed. It was a similar to USB, but targeted at higher bandwidth multimedia applications. As a multimedia-oriented interface, MIDI was a natural fit. In the initial deployments, Firewire had the advantage of much higher bandwidth than USB -- 400 Mbit/S for 1394, vs. 12 Mbit/S for USB.

The USB and Firewire implementations of MIDI are similar. The UART and DIN connectors are replaced with the respective buss interface and plug. The messages exchanged, however, are still MIDI messages, wrapped up as USB or Firewire transactions. The MIDI messaging is essentially unchanged. This allows for backwards compatibility, but does nothing to address the shortcomings of MIDI.

USB is used widely, and continues to evolve. In the USB 2.0 revision, a 480 MBit/S high-speed option was added, addressing the speed advantage that 1394 had over USB. Many newer MIDI devices feature a USB port instead of (or in addition to) regular MIDI ports. There are also standalone USB-to-MIDI interface adapters, for backwards compatibility. 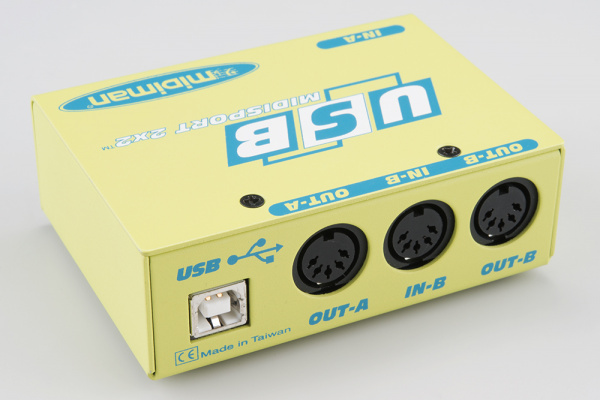 Apple was the driving force behind Firewire, but they have more recently switched to the Thunderbolt and Lightning interfaces. As a result, Firewire is declining in populatiry.

Introcuced by the World Wide Web Consortium as part of HTML5, Web MIDI is an extension of HTML that allows web pages to access MIDI devices on a user's PC. The page can discover MIDI ports, then use them as inputs and outputs.

The synthesizer below is an example of a Web MIDI application. It uses Web MIDI to discover the MIDI ports on the PC. Once the user selects a port, the synthesizer is playable from an attached MIDI controller. It uses the Web Audio API to generate sounds. 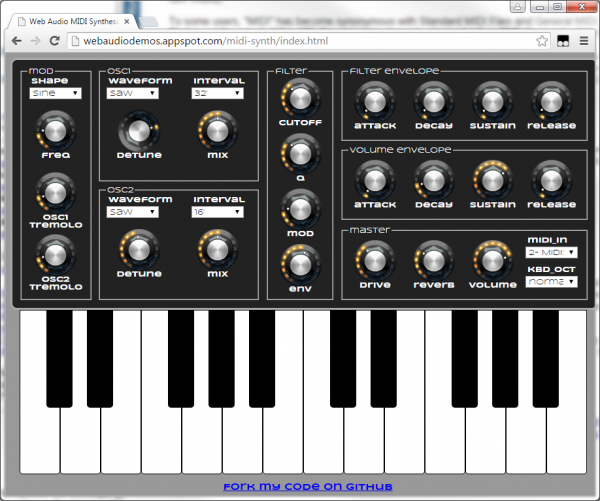 If you want to try it for yourself, click here.

Along with several demonstrations of Web MIDI and Web Audio, this example comes from webaudiodemos.appspot.com. The author, Chris Wilson, hosts the source in his GitHub repositories.

While MIDI is being adapted to new uses, sometimes it's easier to start with a blank slate.

Growing on the ideas that lead to GM, Soundfonts are files that allow for the interchange of sound data between synthesizers. Rather than just using a number to request a type of sound, the sample data and related parameters are all sent together, making the sound itself transportable.

The SoundFont was developed my E-Mu Systems and Creative Labs, first implemented by the SoundBlaster AWE32 soundcard. The Downloadable Sound (DLS) is a similar concept for sound data transport adopted by the MMA.

Some vendors adapted MIDI to control stage lights, but it's a secondary use of the protocol. MIDI has no intrinsic messages or structures to represent lighting-related information, and the defined maximum cable length of 50 feet is too short for large lighting rigs.

DMX-512 was specified in 1986 as a lighting control protocol. Like MIDI, it uses a unidirectional daisy-chain of devices. Unlike MIDI, it uses a differential RS-485 electrical interface, allowing for much longer cable runs. It also uses a very different address scheme, supporting up to 512 devices on a single bus.

The messaging protocol on the chain is actually much simpler than MIDI. The controller bursts out a stream of bytes, up to 512 bytes long. Each device on the bus has a configured address, and the address instructs which byte in the burst is meant for it.

Over the years, there have been many attempts to unseat MIDI. A number of new protocols have been proposed, but most didn't catch on.

OSC is a project of the UC Berkeley Center for New Music and Audio Technology (CMNAT). Compared to MIDI, it works at a very high level and leverages modern networking and data-structure practices. The usual transport is Ethernet, though it can be adapted to use SLIP over serial ports. The data structures are hierarchical and open-ended.

The OSC page on Wikipedia has lists of hardware and software that implement OSC.

OSC may suffer the reverse problem of MIDI: whereas MIDI is tightly constrained and messages are standardized, OSC is extremely open, allowing different instances to specify their own dialects, with less regard for interoperability. SYN is a proposed common dialect to be used between controllers and synthesizers.