This section of the tutorial is going to get deeper into MIDI messages. If that seems daunting, feel free to skip ahead to the next section, and refer back to this page when you're ready.

Some MIDI controllers include a feature known as Aftertouch. While a key is being held down, the player can press harder on the key. The controller measures this, and converts it into MIDI messages.

The first flavor is polyphonic aftertouch, where every key on the controller is capable of sending its own independent pressure information. The messages are of the following format:

Polyphonic aftertouch is an uncommon feature, usually found on premium quality instruments, because every key requires a separate pressure sensor, plus the circuitry to read them all.

Much more commonly found is channel aftertouch . Instead of needing a discrete sensor per key, it uses a single, larger sensor to measure pressure on all of the keys as a group. The messages omit the key number, leaving a two-byte format

Many keyboards have a wheel or lever towards the left of the keys for pitch bend control. This control is usually spring-loaded, so it snaps back to the center of it's range when released. This allows for both upward and downward bends. 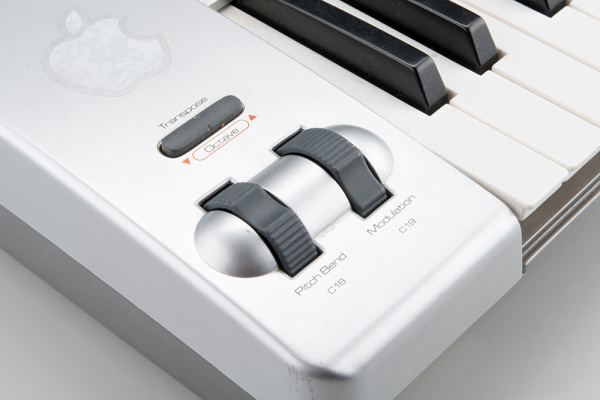 The wheel sends pitch bend messages, of the format

You'll notice that the bender data is actually 14 bits long, transmitted as two 7-bit data bytes. This means that the recipient needs to reassemble those bytes using binary manipulation. 14 bits results in an overall range of 214, or 0 to 16,383. Because it defaults to the center of the range, the default value for the bender is halfway through that range, at 8192 (0x2000).

In addition to pitch bend, MIDI has provisions for a wider range of expressive controls, sometimes known as continuous controllers, often abbreviated CC. These are transmitted by the remaining knobs and sliders on the keyboard controller shown below. 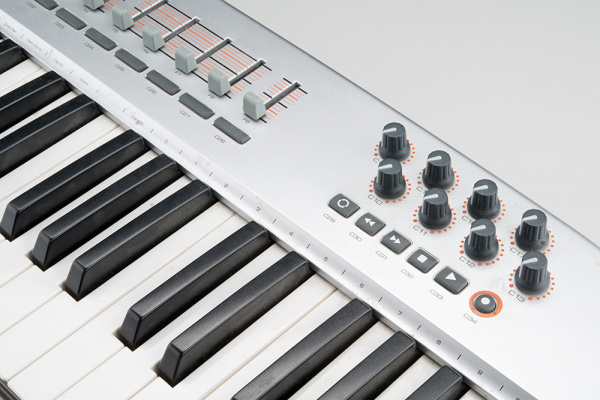 Each of the controllers in the picture above is configured to send a different controller number.

Typically, the wheel next to the bender sends controller number one, assigned to modulation (or vibrato) depth. It is implemented by most instruments.

The remaining controller number assignments are another point of confusion. The MIDI specification was revised in version 2.0 to assign uses for many of the controllers, as shown on pages 2 and 3 of this document. However, this implementation is not universal, and there are ranges of unassigned controllers.

On many modern MIDI devices, the controllers are assignable. On the controller keyboard shown in the photos, the various controls can be configured to transmit different controller numbers. The flip-side is also often true -- controller numbers can be mapped to particular parameters. Virtual synthesizers frequently allow the user to assign CCs to the on-screen controls. This is very flexible, but it might require configuration on both ends of the link and completely bypasses the assignments in the standard.

Most synthesizers have patch storage memory, and can be told to change patches using the following command:

This allows for 128 sounds to be selected, but modern instruments contain many more than 128 patches. Controller #0 is used as an additional layer of addressing, interpreted as a "bank select" command. Selecting a sound on such an instrument might involve two messages: a bank select controller message, then a program change.

We covered system realtime messages in the previous section. The messages are denoted when the MSB of the second nybble is 1. When that bit is a 0, the messages fall into two other subcategories.

If the MSB of the second second nybble is not set, this indicates a System Common message. Most of these are messages that include some additional data bytes.

*MIDI Time Code (MTC) is significantly complex, and beyond the scope of this tutorial. If you need to know the finer points of MTC, you should probably have your own copy of the MIDI Specification!

If you've been keeping track, you'll notice there are two status bytes not yet defined: 0xf0 and 0xf7.These are used by the System Exclusive message, often abbreviated at SysEx. SysEx provides a path to send arbitrary data over a MIDI connection. There is a group of predefined messages for complex data, like fine grained control of MIDI Time code machinery. SysEx is also used to send manufacturer defined data, such as patches, or even firmware updates.

The message is bookended with distinct bytes.

The payload data must follow the guidelines for MIDI data bytes -- the MSB must not be set, so only 7 bits per byte are actually usable. If the MSB is set, it falls into three possible scenarios.

Troubleshooting Tip: Some inexpensive USB-to-MIDI interfaces aren't capable of handling messages longer than four bytes. If you're having trouble with SysEx transfers when using such an interface, it might be useful to inspect the messages on the bus with an application like MIDI Ox.

With all of these different messages, MIDI has become somewhat dialectic -- not every unit implements every message. A simple controller-to-synthesizer link might only need to use note on and off messages, while an on-stage pyrotechnic controller might completely ignore note messages, requiring time code, and specific SysEx commands to arm the smokebombs and flashpots.

To help the user understand what messages a specific device uses, the manual often includes a table that indicates what it can send and receive. 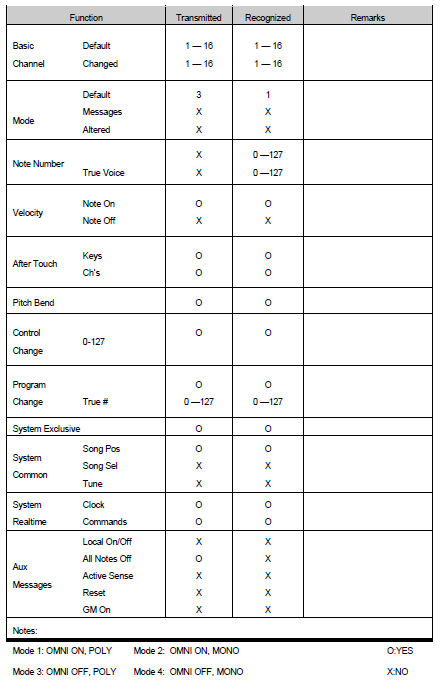 The chart above shows a typical implementation chart for an instrument. It tells us some notable things about the MIDI dialect spoken by this device: