In addition to the communication protocol, MIDI also specifies some related technologies, with the goal of achieving greater intercompatibility. MIDI has been extended several times, to clarify parts of the messaging protocol, and to help standardize areas related to electronic musical instruments. While not an exhaustive list, we'll discuss a couple of the common extensions below.

As MIDI sequencers caught on, people wanted to be able to move their song data between different sequencers. Each sequencer implemented a proprietary file format -- some were able to import data from others, but it was far from universal.

The Standard MIDI File was specified as the lingua franca for sequence data interchange. The files use the SMF extension.

SMF has been widely adopted, across many operating systems. Media player programs can play them back, while full-fledged sequencers can import, edit and export SMFs.

Moving sequence data between platforms brings along a related problem: the MIDI communication protocol does not specify how instruments interpret patch changes, associate instruments with MIDI channels, nor implement multitimbrality. General MIDI adds some standardization to those parameters, so that different instruments will respond similarly.

General MIDI defines a standard sound set -- a mapping of program change commands to specific sound patches. On all MIDI channels except 10, Program #1 would always be a grand piano patch, #2 a "bright piano", and so on.

Channel 10 is reserved for drums, and the mapping of drum sounds to the keyboard was also defined.

General MIDI also specifies that a supporting instrument need to simultaneously allow voices on all 16 channels, and provide at least 24 voices of polyphony. 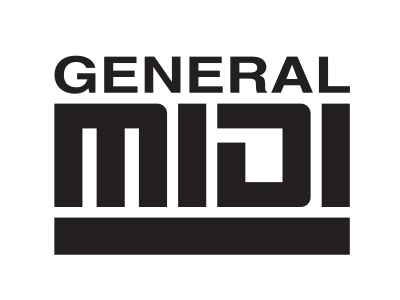 A sequence composed for the General MIDI sound set (likely stored an an SMF) will play back similarly on any General MIDI instrument. Of course, even with the standardization, there will be some variation between instruments.

General MIDI was also common on PC soundcards with an onboard wavetable synthesizer. This was playable as an instrument in itself and also used by video game soundtracks. Cell phones also feature a GM sound generator, and can use SMF files as ringtones. Today, computers and cell phones are capable of handling audio files for video game soundtracks and sound effects, and the General MIDI/SMF pairing is becoming less common.