The most interesting features in the LP55231 are the three execution engines. These are three simple, independent, computers that can be programmed to perform LED-related tasks. Before we can look at code written to run on them, we need a little more complete concept of what's inside and how it works. 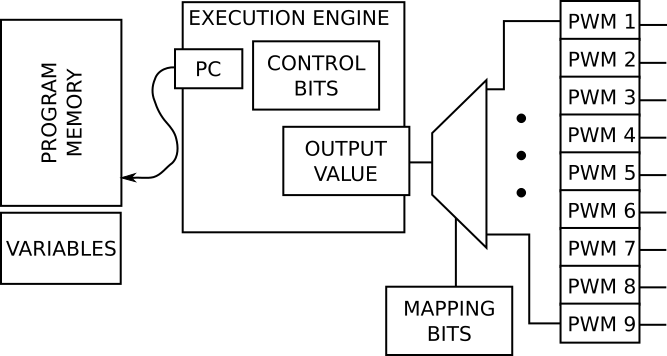 Each engine has the following structure:

Each engine is a simple Fetch-Execute Machine. A Fetch-Execute Machine is the basis for a computer. When we think of a computer, we usually think of a general-purpose machine that can be programmed to accomplish many different tasks, such as writing documents or performing mathematical work. In contrast, this one is tailored to LED-specific tasks.

For example, when the program in the diagram above starts, the PC is pointing at location 0, so the engine fetches the instruction FADE UP TO FULL. The engine would increment the output value until it reaches maximum, then increment the PC and fetch the next instruction.

The 96 words of program memory mentioned above store a program, which is a series of encoded commands, or Instructions. Within the 16-bit words, some bits describe the action to be taken, while others modify that action, specifying things like brightness levels, channel mapping and ramp times.

The LP55231 instruction set is broken into four categories.

This group of instructions effects the LED output of the engine. The output can be set directly, instructed to ramp from one value to another, or simply pause for a specified time.

Each engine calculates a single output value. The engine output can be routed to a single LED with the MUX_SEL instruction.

The mapping instructions can also send that value to multiple outputs, using an indirection table. The table contains one or more bitmaps that describe the outputs controlled by the engine -- the LSB maps to output 1, the next bit to output 2, and so on, using 9 bits. The program uses instructions to select the outputs by referencing the table entries.

A table can be composed of multiple entries, and output selections sequenced by selecting new rows in the table. We'll show how to use this in the following example.

Ordinarily, as the program executes, the PC increments to select the next instruction. The BRANCH instructions change this behavior.

Branches cause the program counter to be loaded with a new value, to create loops and conditional execution (like for or if statements).

The Interrupt instruction allows the LP55231 to notify the microcontroller that it has reached a specified line in the program. The Trigger instruction makes the engine wait until certain conditions (such as a logic level on the Trig input) are present.

There are also RST and END instructions. Reset causes the program to start over form the beginning, while End causes the engine to halt.

Finally, the LP55231 can perform addition and subtraction on values stored in the variables.

A detailed description of every instruction is in section 7.6 of the LP55231 datasheet.

Now that we have a conceptual model of the execution engines, let's move on to an example that applies them.