In this tutorial, we'll show you how to use Arduino to install the micronucleus bootloader, which has V-USB, onto an ATtiny84. These steps will work for other ATtiny chips, but you'll need to change things like the pins_arduino.h file and target parameters in avrdude.

By following this guide, you will be able to upload Arduino sketches directly to the ATtiny84 over USB without needing to use a programming device (such as another Arduino or FTDI chip).

The Atmel AVR ATtiny84 is very similar to the ATtiny85 but with a few more I/O pins (six more, to be exact). If you like working with very small, inexpensive microcontrollers, the ATtiny84 and lower-power ATtiny84A are good options. Either the ATtiny84 or ATtiny84A will work for this tutorial. 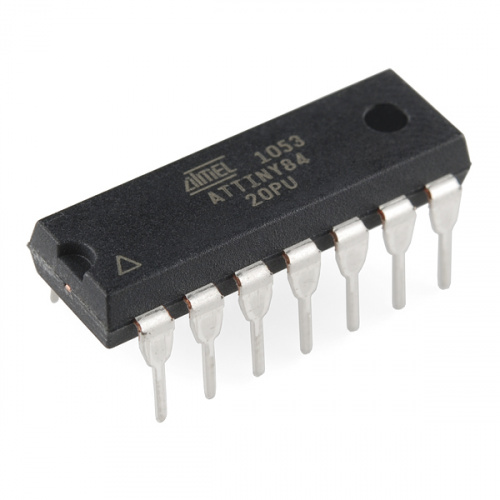 $3.50
1
Favorited Favorite 21
Wish List
Warning: To make this work, we'll need to run the ATtiny84 at 12MHz during the bootloader phase. This tutorial shows how to do that with the internal RC clock at 3.3V. Note that this is out of spec for the ATtiny84! We're essentially overclocking/hacking the ATtiny to do something it's not supposed to do. Do this at your own risk! SparkFun takes no responsibility if you brick/smoke/blow up your ATtiny. Good thing they're cheap.

In this tutorial, we'll show you how to:

However, using a bootloader potentially reduces the production cost of a custom Arduino board if you don't want to rely on separate hardware for programming.

Note: If you don't want to use the bootloader, you can still program the ATtiny84 directly from Arduino using another Arduino device as an ISP.

Tip: If you don't have the exact value, you can place resistors in series or parallel to get the equivalent value you need. For more information, check out our tutorial on resistors!

Before moving along, we recommend you have familiarity with the following concepts.