While the hardware is obviously important, what really makes the WiFi Shield play nicely with an Arduino is its serial-based AT command-set firmware.

The ESP8266 WiFi Shield ships with Espressif's (the manufacturer of the ESP8266) latest release of their AT command set firmware. We've tweaked the base firmware to add support for the status LED and serial control of the ESP8266's unused I/O. Our firmware is as open source as can be (some of Espressif's source is only available as blobs) -- you can check it out in our ESP8266 WiFi Shield GitHub repository.

Using the AT Command Set

In later parts of this tutorial, we'll introduce an Arduino library, which handles all of this "AT" stuff for you. But it doesn't hurt to at least familiarize yourself with the commands used to configure the ESP8266.

The ESP8266's default serial baud rate is 9600 bps. This communication speed can be configured, but slower speeds are recommended if software serial is used.

For the full list of the ESP8266's AT commands check out this document. There are a variety of commands, which configure everything from access-point names/passwords, to TCP connections, to the device's baud rate. 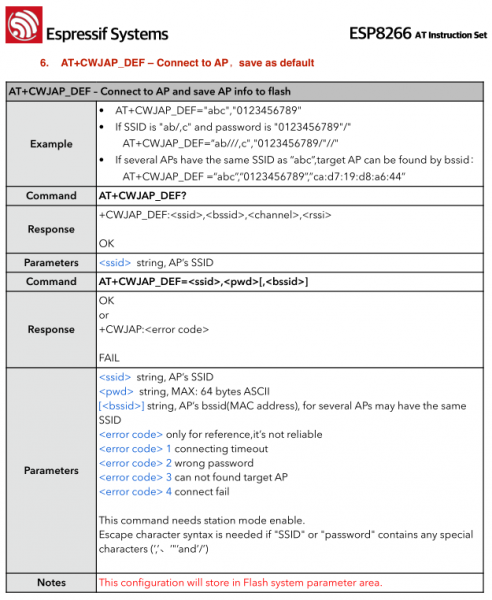 Example page from the AT command set guide -- this one demonstrates how to connect to a WiFi access point.

If you're manually entering these commands, keep in mind that the end of each command should be signaled by a carriage return then line feed ("\r\n").

As an example exercise, here are a series of commands you might type to connect a WiFi access point and get your IP address:

The custom commands allow you to set a pin to input or output (or input with pullup resistor), digitally write high or low, or read the pin's state: