If you've used Arduino in the past, there will be some new programming schemes to get used to in ESP8266 land.

As with any other Arduino, the pin mappings printed on the board match the pin you read or write to. The SDA and SCL pins can be referenced as 2 and 14 respectively.

There's only one analog input pin, labeled ADC. To read the ADC pin, make a function call to analogRead(A0). Remember that this pin has a weird maximum voltage of 1V -- you'll get a 10-bit value (0-1023) proportional to a voltage between 0 and 1V.

This is one of the most critical differences between the ESP8266 and a more classical Arduino microcontroller. The ESP8266 runs a lot of utility functions in the background -- keeping WiFi connected, managing the TCP/IP stack, and performing other duties. Blocking these functions from running can cause the ESP8266 to crash and reset itself. To avoid these mysterious resets, avoid long, blocking loops in your sketch.

The amazing creators of the ESP8266 Arduino libraries also implemented a yield() function, which calls on the background functions to allow them to do their thing. As an example, if your sketch is waiting for someone to press a button attached to pin 12, creating a loop like this will keep the ESP8266 from crashing:

This is the ESP8266, so the WiFi class will probably be included in just about every sketch there is. If you've used the Arduino WiFi library before, the ESP8266 WiFi library will be very similar, there's just a few key differences:

The examples earlier in this tutorial should have demonstrated all of these differences.

Libraries Available/Not Available and the Differences

A lot of the core Arduino libraries have been re-written to work for the ESP8266, including:

GPIO0 -- while perfectly capable as a digital I/O -- serves a secondary purpose as a bootload/run-mode controller. When the ESP8266 boots up, it looks at GPIO0's value to either enter the bootloader or start running the current program:

To make it easy to program the ESP8266, we've tied GPIO0 to DTR (along with RST). When your programmer begins to upload a sketch, it'll pull DTR low, in turn setting GPIO0 low and making the ESP8266 enter bootloader mode.

There are a few ways around this. We've added the DTR jumper on the bottom of the board. You can cut the trace on the back and install a 2-pin male header combined with a 2-pin jumper. If the jumper is present, the board will be able to be programmed. Removing the jumper will enable serial terminal mode. 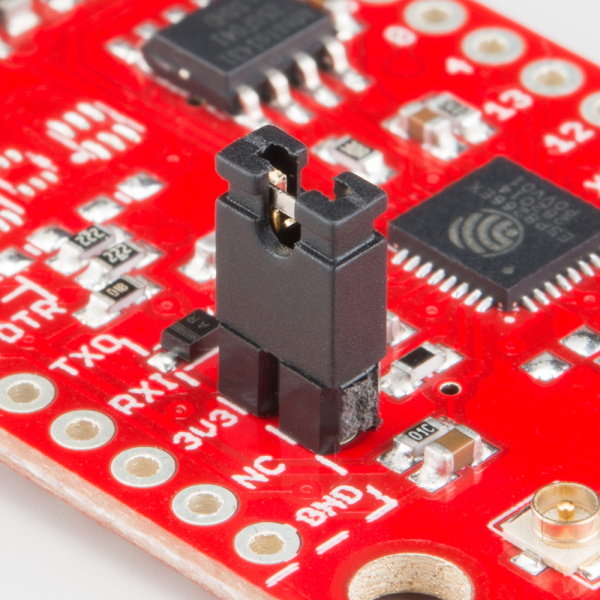 Or you can find a serial terminal program that allows control of the DTR pin directly. RealTerm allows for this control -- navigate to the "Pins" tab, and click "Clear" next to "DTR." 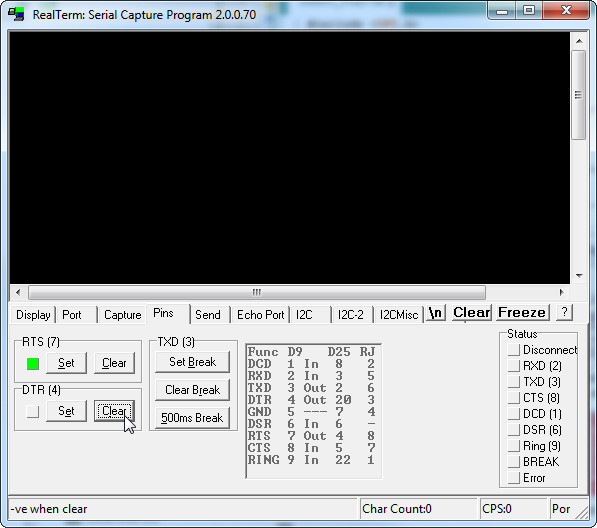 Unfortunately, this Windows-only solution is the only terminal program we've found so far with such control. Your best bet may be to try to avoid serial debugging whenever possible -- that's what LED's are for, right? (Tongue only kind-of in cheek.)