In order to understand some of the shortcuts we took, you’ll need to know how the discs inside a combination lock operate. Here’s a quick primer! 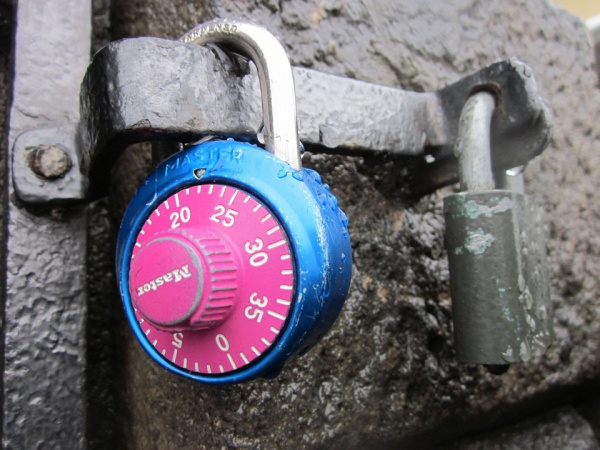 If you’ve ever used a combination padlock you know the basics:

The most common padlocks have a dial from 0 to 39 with a combination AA/BB/CC. Combination safes work exactly the same but with larger dials, usually 0 to 99. Some safes have additional combination numbers (for example: AA/BB/CC/DD/EE), but the general home-store fire safe is 3 numbers.

But, how do the internals of a combination safe actually work?

Here’s a video to show you the basics:

There are three discs, let’s call them discs A, B and C. Each disc has a notch in it called a gate. When you pull down on the handle, a rod (sometimes called the fence) hits the three dials. If the three gates are lined up correctly, the rod slides into the notches. This allows the handle to travel far enough to disengage the lock on the door, and the safe can be opened.

Turning the dial on the outside of the lock directly controls disc C (sometimes called the drive wheel). Twist it clockwise (CW) or counterclockwise (CCW), and you directly manipulating the C disc. But, how do you move the other two discs?

Discs from the inside of a fire safe

Each disc has a raised plastic tab. When the discs are next to each other, a disc can move freely for about 350 degrees until its raised tab hits the tab on the next disc and begins moving it.

Clear as mud? Check out Woodgears. They have a great breakdown of the pieces and a video showing how the discs are manipulated.