The dial on our safe was modeled, and a coupler was 3D printed. This was attached to our motor with a 6mm clamping hub. We found that hubs with set screws would loosen quickly and wreak havoc with our control algorithms. Use a clamping hub!

The counts per revolution was most important. We wanted a lower cost motor that had LOTS of resolution to measure the internal indents in disc C (covered in a later section). 12V was good because we had used a similar power supply and display for our Speed Trap project.

The encoder uses two interrupt pins connected to the interrupt pins on the Arduino. Once we zero the dial, the step count is used to determine on which digit the dial is.

It’s worth noting that the tolerances of the coupler to dial and the rigidness of the hub and motor mounts are important. Any slack in the system will cause problems later.

We tried a few different methods to calibrate the dial. Originally, we tried a reed switch with a magnet built into the 3D printed coupler. This was a horrible idea: reed switches detect relative proximity but are bad at detecting exact location. I had a few instances where the reed switch would open when the magnet was directly under the switch and close again when the magnet moved a few millimeters away. Don’t use a reed switch. 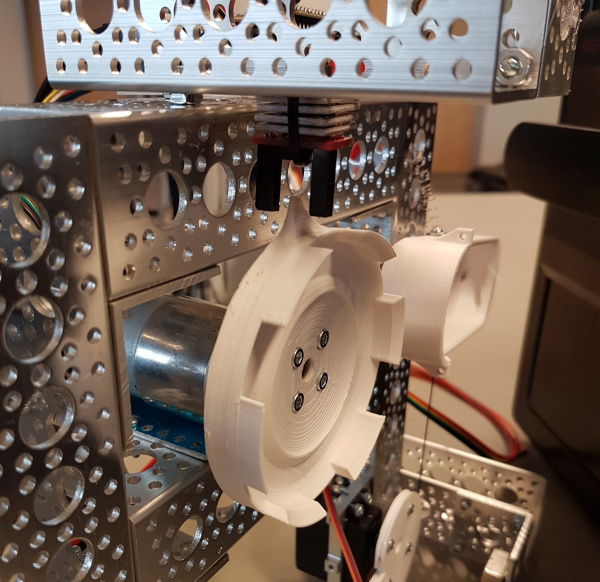 We ended up using a photogate with a small flag designed into the coupler. It’s straightforward to detect when the gate is broken by the flag. When the robot is magnetically attached to the safe, the dial is in an unknown position. There’s an offset variable that can be set so that when you say, "go home", the robot figures out that the flag is at dial position 43, and it needs to travel 57 more to arrive at home.

Once calibrated (and after lots of code revisions), we found that the control of the dial was very reliable. During cracking, we recalibrate every time we adjust disc A just to be safe.