The SparkFun 9DoF Razor IMU M0 combines a SAMD21 microprocessor with an MPU-9250 9DoF (nine degrees of freedom) sensor to create a tiny, re-programmable, multi-purpose inertial measurement unit (IMU). It can be programmed to monitor and log motion, transmit Euler angles over a serial port, or to even act as a step-counting pedometer. 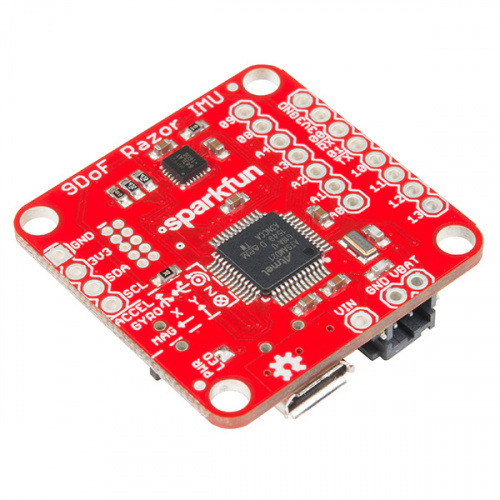 In addition to pair of IC's, the 9DoF Razor IMU includes a µSD card socket, LiPo battery charger, power-control switch, and a host of I/O break-outs for project expansion. It comes pre-programmed with example firmware and an Arduino-compatible bootloader, so you can customize the firmware and flash new code over a USB connection.

This tutorial serves as both a primary documentation source and getting started guide for the SparkFun 9DoF Razor IMU M0. The first couple of sections document hardware and firmware features of the board, while the latter half of the tutorial demonstrates how to use the Arduino IDE and our MPU-9250 Arduino library to re-program the Razor IMU to your specific needs.

The 9DoF Razor IMU M0 comes populated with just about everything you could need to take advantage of the MPU-9250 9DoF sensor. There are just a handful of items -- most of which you probably already have in your toolbox -- you may need in addition to the board.

A micro-B USB cable can be used to both power and re-program the Razor. But, if you truly want to make the board mobile, you'll need a single-cell Lithium-polymer (LiPo) battery, which can be recharged by plugging the 9DoF Razor into a USB supply. Additionally, if you want to log data, the 9DoF Razor IMU's µSD socket supports any µSD card.

These are very slim, extremely light weight batteries based on Lithium Ion chemistry. Each cell outputs a nominal 3.7V at 850…

This is an 8 gig microSD memory card. It's perfect for massive datalogging without taking up a lot of space. These microSD ca…

Finally, you may need soldering tools and headers or wire, if you want to take advantage of the 9DoF Razor IMU's I/O and power breakouts.

Feel free to jump right into using and developing on the 9DoF Razor IMU M0 -- we've tried to make the board as easy to use regardless of you electronics experience level. If you'd like to do some pre-reading, though, here are a few tutorials we might recommend:

Gyroscopes measure the speed of rotation around an axis and are an essential part in determines ones orientation in space.
Favorited Favorite 20

A quick introduction to accelerometers, how they work, and why they're used.
Favorited Favorite 28

Get up and running with the MPU-9250 9-axis MEMS sensor.
Favorited Favorite 8
Share
Use this URL to share: