The SparkFun Qwiic GPIO is an I2C device aimed at simplifying adding extra GPIO pins to a microcontroller. The board uses the TCA9534U I/O Expander IC from Texas Instruments to add up to 8 digital inputs and outputs controlled via an I2C interface. The TCA9534U features three address select pins that can be set to configure eight unique addresses meaning you can have up to 64 I/O pins controlled from a single I2C bus! 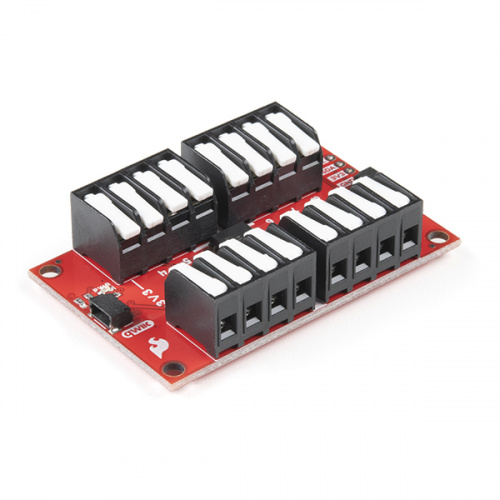 The Qwiic GPIO, based on the TCA9534 I/O Expander IC adds an additional 8 IO pins which you can read and write just like any …

To simplify wiring everything up, we've broken out all eight of the general-purpose I/O pins on the TCA9534U along with several power rail pins to latch terminals and, as you would expect from a Qwiic board, the I2C interface is broken out to a pair of Qwiic connectors.

Controlling the TCA9534 is relatively straightforward but to make things even easier, we've written an Arduino Library and a Python Package for the Qwiic GPIO to make writing code for it as easy as possible.

In this guide we'll go over everything you need to know about the Qwiic GPIO so you can add those extra I/O pins to your circuit with ease!

In order to follow along with this tutorial you'll need a few items along with your Qwiic GPIO. First, you'll need a microcontroller to communicate with the board. Below are a few options that come Qwiic-enabled out of the box:

If your preferred microcontroller does not have a Qwiic connector, you can add one using one of the following products:

SparkFun Qwiic Shield for Thing Plus

Finally, you'll need at least one Qwiic cable and possibly some hook up wire or jumper cables. Below are a few options for each of those cable types:

If you aren't familiar with the Qwiic system, we recommend reading here for an overview:

An introduction to polarity in electronic components. Discover what polarity is, which parts have it, and how to identify it.
Favorited Favorite 43

This tutorial will show you how to communicate with your serial devices using a variety of terminal emulator applications.
Favorited Favorite 37

What is an interrupt? In a nutshell, there is a method by which a processor can execute its normal program while continuously monitoring for some kind of event, or interrupt. There are two types of interrupts: hardware and software interrupts. For the purposes of this tutorial, we will focus on hardware interrupts.
Favorited Favorite 7

Handling PCB jumper pads and traces is an essential skill. Learn how to cut a PCB trace, add a solder jumper between pads to reroute connections, and repair a trace with the green wire method if a trace is damaged.
Favorited Favorite 10
Share
Use this URL to share: