The Qwiic GPIO Arduino Library has three examples split into single pin and port variants to demonstrate how to set up control the TCA9534 along with a fourth example demonstrating how to use the external interrupt capability. In this section we will go over those examples and highlight a few things to take note of when setting up your Qwiic GPIO in code.

Note: If you are using the SparkFun Qwiic Micro - SAMD21 Development Board as shown in the Hardware Assembly section you'll need to add this quick define due to how the SAMD architecture handles ports: #define Serial SerialUSB
This definition helps a ton when working with chip architectures that have multiple serial ports you need to call specifically instead of using a general Serial calls. Simply update that definition with whichever serial port you want to use for serial prints via USB.

A basic digital write example. Open Example 1A in Arduino by navigating to File > Examples > SparkFun Qwiic GPIO Arduino Library > Example1a-Write_GPIO. This example sets up GPIO 0 as an output and toggles it HIGH and LOW. The code starts up by initializing the Qwiic GPIO on the I2C bus on the default address and sets GPIO0 as an output:

Take note to use GPIO_OUT or GPIO_IN instead of the standard Arduino setup of OUTPUT and INPUT_PULLUP when setting the GPIO pin as an input or output. We use these alternates because the TCA9534's I/O pins default as an INPUT (pin mode = True) so GPIO_IN = true and GPIO_OUT = false are defined in the library to set the pin mode to avoid confusion. After we've set up GPIO 0 as an output, the code toggles it HIGH and LOW using digitalWrite(); every second and prints out the GPIO status via serial. 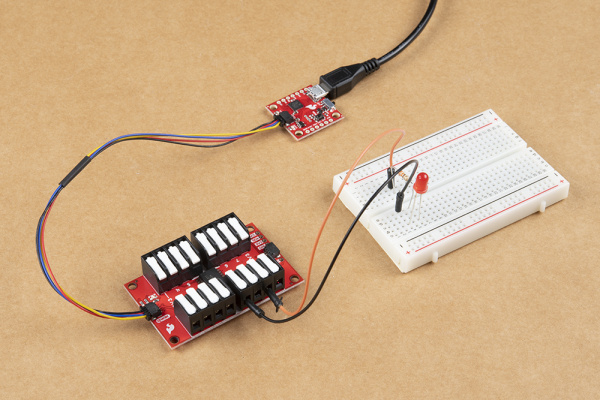 The demo circuit above shows a visual representation of GPIO 0 being toggled HIGH and LOW using an LED. If you want to control more pins, simply add another myGPIO.pinMode(); for whichever pin you want to use to set it as an output and then control it using myGPIO.digitalWrite();.

This version of writing to the Qwiic GPIO controls the entire port (all eight GPIO pins). In order to set up the port we need to define the number of GPIO pins we are using as well as construct a boolean to define each pin as either an input or output. Since this example is for writing to the port, all eight pins are defined as outputs:

Along with the pin mode, we also need to define the initial state of each GPIO:

With the GPIO port configured, the code initializes the Qwiic GPIO on the I2C bus and then alternates the state of each pin every second using a function specific to this example called flipGPIO();:

Example 2A demonstrates how to read an individual GPIO pin on the TCA9534. It starts by setting up GPIO 0 as an input, reads its state and prints out whether it is HIGH or LOW via serial. Similar Example 1, GPIO 0 is set up but in this case is set as an input using pinMode(0, GPIO_IN);. The code then monitors the pin's state every 250ms and prints the state via serial. You can view the main loop below: 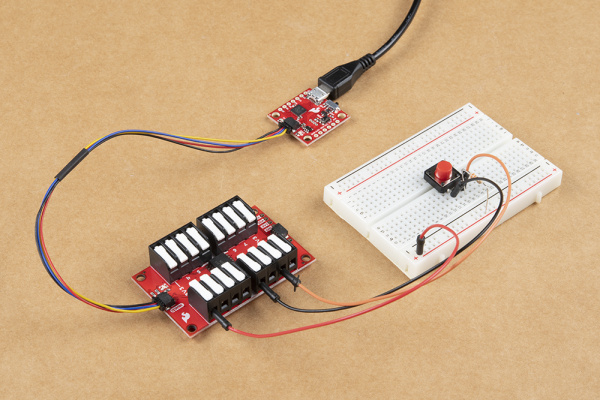 The example circuit pictured above demonstrates how to monitor an active HIGH input on the Qwiic GPIO by driving the selected I/O pin (in this case GPIO 0) LOW whenever the button is pressed.

Note: Defining a pin as an input is not absolutely necessary since GPIO pins on the TCA9534 default to inputs on power on. We include that call in any example using inputs in case an I/O pin used in the example was set as an output without power-cycling the Qwiic GPIO.

Example 2B demonstrates how to read the entire GPIO port on the TCA9534. The code sets up all eight GPIO pins just like Example 1B using a boolean but this time all pins are set as inputs. We also need to set up a second boolean for the GPIO pin status due to how the port read register of the TCA9534 works:

With the port set up and configured, we can move on to initializing the Qwiic GPIO on the I2C bus and start reading the status of the entire GPIO port. As the comment in the code below explains, in order to read from the port you can either return the full register value as an unsigned 8-bit integer or by passing an array of 8 booleans modified by the function that returns the status of each pin. The example defaults to the latter and sets up an array for the port read:

Example 3A shows how to invert the signal polarity of an input on the Qwiic GPIO. Polarity inversion only works on pins configured as an input so first we set the pin mode and then we invert the polarity. Input pins default to active HIGH so inverting it changes it to active LOW. Below you can see the setup required for pin inversion:

Once we have set up the pin as an input and inverted the polarity the main loop reads the status of the pin every 100ms:

Example 3B, as you might expect by now, exhibits how to invert the entire port on the Qwiic GPIO. The code starts as the other port examples do by defining the number of pins and setting the pin mode of all pins on the port. It then inverts half of the pins' polarity using a second boolean. The setup can be seen below:

The main loop is identical to Example 2B - ReadGPIO - Port and prints out the state of the port register using an unsigned 8-bit integer.

Heads Up! In this example we use D13 as our interrupt pin since the code was written for use with a SparkFun RedBoard/Arduino Uno. If you are using a different microcontroller with your Qwiic GPIO, take a look through its documentation to see which pins can be used as an interrupt and then adjust this definition: #define INTERRUPT PIN 13 to the selected pin. If you are not familiar with using processor interrupts on a microcontroller, this tutorial will help you get started.

The code starts similarly to our other Port examples by defining the number of GPIO pins and setting their pin status. Along with the GPIO pins, we define the interrupt pin on our microcontroller. You can view the pertinent bits of this code below:

With everything defined, the setup initializes the Qwiic GPIO on the I2C bus, sets the interrupt pin on the microcontroller as an input, "primes" it by writing it HIGH and tells our microcontroller to treat it as an interrupt:

Now that our interrupt pin is configured the code monitors the GPIO pins' statuses and any time the status changes, the interrupt pin on the Qwiic GPIO will be driven LOW. You can view the entire loop and ISR function below:

That wraps up the Arduino examples but if you would prefer to use Python instead with a different development board or single-board computer like the Raspberry Pi, read on to the next two sections where we'll detail how to use the Qwiic GPIO Python Package.