The Raspberry Pi foundation provides excellent documentation for the RP2040 on their website. This includes information for users to program the RP204 with MicroPython and C/C++ through the Pico SDK. Arduino, has also announced the release of their Mbed RP2040 Arduino core. The instructions below, are meant to help users setup and utilize the following programming environments on Windows 10 computers:

For utilizing the Pico SDK (C/C++) and MicroPython on Mac OSX and Linux based computers, users can follow the instructions provided by the Raspberry Pi Foundation documentation:

Note: For first-time users, who have never programmed before and are looking to use the Arduino IDE, we recommend beginning with the SparkFun Inventor's Kit (SIK), which includes a simpler board like the Arduino Uno or SparkFun RedBoard and is designed to help users get started programming with the Arduino IDE.

Most users will be familiar with the Arduino IDE and it's use. As a point of reference for professional developers who aren't aware, the Arduino IDE is an open-source development environment, written in Java, that makes it easy to write code and upload it to a supported board. For more details, feel free to check out the Arduino website.

To get started with the Arduino IDE, check out the following tutorials:

Installing the RP2040 Board Definition

Install the latest Arduino Mbed OS RP2040 board definitions in the Arduino IDE. Users unfamiliar with the board definition installation process can reference our tutorial below.

Note: Users trying to access the SD card slot will need to modify the pins_arduino.h file to reconfigure the SPI bus pins. However, this will make the SPI bus inaccessible through the breakout pins (when utilizing the SPI library).

Note: GitHub user earlephilhower has ported an unofficial Arduino core for the RP2040, which is based on the Pico SDK. This is useful for customers who want the functionality of the Pico SDK in the Arduino IDE. Installation instructions are available in the GitHub repository.

In order to program the RP2040 with C/C++, users will use the Pico SDK (software development kit) provided by the Raspberry Pi Foundation. Additionally, the Raspberry Pi Foundation has written a user manual, which includes software documentation and examples to accompany the Pico SDK. The foundation has also provided online documentation that can be used as a reference manual.

Getting Started: For novice programmers, we recommend starting off with the Getting Started with Raspberry Pi Pico guide, from the Raspberry Pi Foundation. While the guide is intended for their RP2040 microcontroller board, it contains useful information for getting started with the Pico SDK, building and uploading a program, debugging, and adapting the SDK to a third-party IDE.

Installation: The Raspberry Pi Foundation also provides an installation script to download and setup the Pico SDK on a Raspberry Pi (SBC) single board computer, which can be downloaded from their GitHub repository.

Click to download the Raspberry Pi installation script from GitHub (zip)
Basic Operation: Users programming with the Pico SDK will be creating a project, compiling, and building their code to a .uf2 file, which the SDK generates. The .uf2 firmware file is then copied to the board, when it is in BOOTSEL mode to upload the program.

As documented in the user manual, the Pico C/C++ SDK can be used with various integrated development environments (IDEs). In order to utilize the SDK, users will also need to install a few dependencies. The Raspberry Pi Foundation also provides examples for the basic functionality of the RP2040 in their pico-examples GitHub repository.

On Windows 10 computers, the simplest way to get started with the Pico SDK is to use the installation script from the pico-setup-windows GitHub repository.

Users will need to download and use the installation executable files from the releases section:

Path C:\Program Files\<PythonXx>\Scripts\
Note: The version/release value for the Python program will likely change over time.
Note: The file path may also vary. For the Python 3.6, our file path was:
C:\Users\<username>\AppData\Local\Programs\Python\Python36-32\Scripts\

For more information on configuring the PATH variable, check out the tutorial below:

Note: Users will only need to download MicroPython, if they want to rebuild the .uf2 file or inlude a Python package in their custom build. For more information on MicroPython check out their online documentation and the README.md for the RP2040 port.

Basic Operation: Before users can begin programming with MicroPython, they will need to copy the .uf2 firmware file to the board (while it is in BOOTSEL mode). The latest MicroPython firmware can be downloaded from the RP2040 documentation on the Raspberry Pi Foundation website.

Go to the RP2040 documentation hosted by the Raspberry Pi Foundation

Once copied, the RP2040 should automatically reset. Then users can utilize the REPL (Read–Eval–Print Loop) to interface with the microcontroller directly or use rshell to upload and save their code to the flash memory of the RP2040.

As documented in the user manual, the MicroPython can be used with various integrated development environments (IDEs). In order to utilize the SDK, users will also need to install a few dependencies. The Raspberry Pi Foundation also provides MicroPython examples to accompany the book (noted above), which can be downloaded from their GitHub repository.

Note: The RP2040 Thing Plus must be running MicroPython to access and utilize the REPL.

Users can access the REPL with their favorite serial terminal to instantly program the RP2040 microcontroller. After the MicroPython firmware is copied to the board, it will reset and show up on the computer's serial (or COM) port. Make sure to configure the serial terminal emulator for a baudrate of 115200 bps. 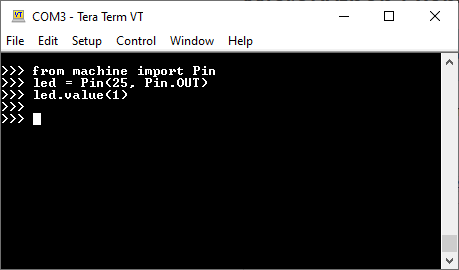 Programming the RP2040 through the REPL. (Click to enlarge)

Note: The RP2040 Thing Plus must be running MicroPython to utilize rshell and upload your program.

Programming Instructions:
Below is an example of how to upload a program to the board using rshell on Windows 10. 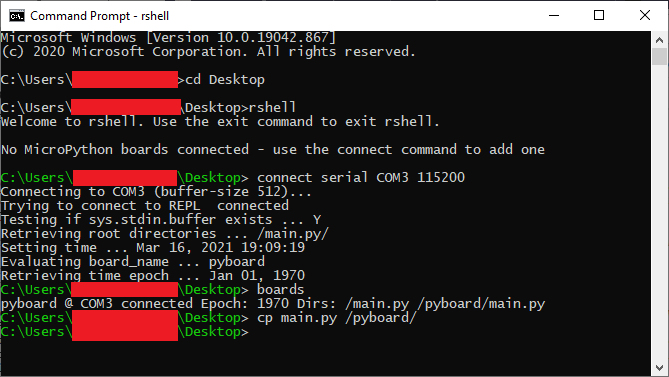