On this page you'll find troubleshooting tips and FAQs. Here's a directory of the subjects covered:

Serial Port Not Showing Up in 'Tools > Board' Menu

The Qwiic Pro Micro can be a finicky little thing. There are a few series of events that can lead to its serial port being removed from the Arduino IDE's Serial Port selection menu. If you can't see your Pro Micro's serial port, give these steps a try:

We ship the Qwiic Pro Micro with a modified version of the Arduino Leonardo bootloader, with one major enhancement. When a Leonardo (or any device using the "stock" bootloader) is externally reset, it goes back into the bootloader...and waits there eight seconds before it starts running the sketch. For some embedded projects, waiting eight seconds before a program runs isn't acceptable, so we modified the bootloader run time.

When a Qwiic Pro Micro is externally reset (by pulling the RST pin low), it'll only briefly (<750ms) start the bootloader before continuing on to the sketch. If you need the bootloader to run longer, resetting twice quickly will get the Pro Micro to enter bootloader mode for eight seconds.

Resetting the Qwiic Pro Micro is now easier to reset with the built in reset button. Just press the reset button located next to the Qwiic connector two times. You can also connected the RST pin to ground to initiate a reset. This can be done with a small piece of wire, or an externally connected button. 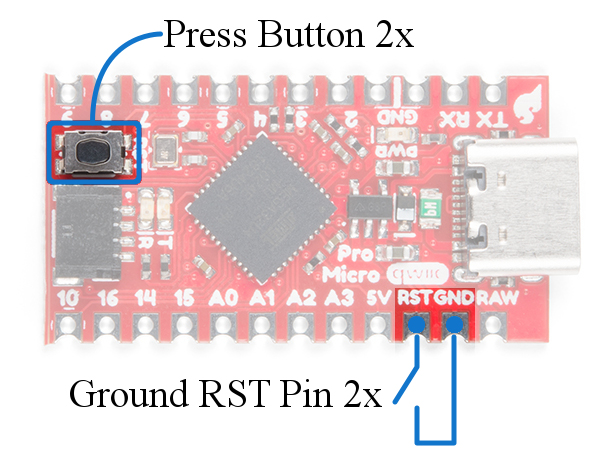 Why would you need to enter bootloader mode in the first place. Glad you asked...

How to Revive a "Bricked" Pro Micro

Incorporating all of the USB tasks on a single chip is an awesome feature that makes the Pro Micro and boards like it truly unique. But it also places more stress on a single chip, and if anything goes wrong with that chip, the board becomes nearly unusable. It's not uncommon for Qwiic Pro Micro's to become "bricked" and unprogrammable. But, in most cases, the bricking is reversible!

The most common source of Qwiic Pro Micro "bricking" is uploading code to it with an incorrectly set board (e.g. programming a 16MHz/5V Pro Micro with the board set to 8MHz/3.3V). Also, make sure your sketch doesn't mess with the ATmega32U4's PLLCSR register, or any other register that sets up USB functionality on the ATmega32U4. The Pro Micro will actually take code compiled for the wrong operating speed, but when it tries to re-enumerate, you'll be greeted with a notification like this:

To revive the Pro Micro, you'll need to find a way to upload a sketch to it with the board option correctly set. We can do this with a little help from the bootloader.

With the serial port set, we're just about ready to re-upload our sketch. But first, double check that the board is correctly set. Then reset to bootloader again, and quickly upload your sketch. Again, you'll have to be quick...you've only got eight seconds. It may help to press the Upload keybind -- CTRL + U / CMD + U -- immediately after resetting.

It can take a few tries to get the timing right. Since the code has to compile first, it may help to hit upload first and then reset.

Still having trouble getting that timing down?

One of our customers (shout out to RichardDL) has come up with a nifty solution (Windows only) to automate the bootloader process and program the board, by creating a batch file. Check out the details in his forum post!

Code Runs After Upload But Fails to Start After Power Cycle

If you're having technical difficulties with your Qwiic Pro Micro, see if any of the answers to these FAQs help. If not, please get in touch with our tech support team.

What are VID and PIDs?

How Can I Change the VID and PID on an ATMega32U4 Board?

Every time you upload code the VID and PID are uploaded to the device. These values are located in the 'boards.txt' file and will therefore be determined by the board you have selected. Keep in mind that if you select the wrong board you will get the wrong VID/PID uploaded which means the computer can’t recognize, and program the board. The VID/PID for the bootloader is part of the bootloader file. To change this you will need to recompile the bootloader with the new VID/PID, and upload it.

Why Does my ATMega32U4 Board Show up Twice in Device Manager?

How Does the IDE Know Which COM Port to Use?

When the IDE resets the board, the COM port is disconnected from the computer. The IDE then looks for a new COM port. This is the port it uses. This is one of those weird things Arduino did to get things to work on this chip.

How Do I Reinstall the Bootloader?