Support Tip: Make sure that you are connecting the Main Qwiic connector to the Arduino board/shield or Raspberry HAT.

Just plug one end of the Qwiic cable into the Main connector on the Qwiic multiplexer breakout and the other end into Qwiic connector on your Qwiic enabled microcontroller. If it seems like it's too easy to use, but that's why we made it that way! Otherwise, if you chose to use a Qwiic shield/adapter, now would be the time to head on over to that tutorial to assemble the shield.

With the shield assembled, SparkFun's new Qwiic environment means that connecting the mux could not be easier. Just plug one end of the Qwiic cable into the Qwiic multiplexer breakout (Main connector) and the other into the Qwiic Shield; then, you'll be ready to upload a sketch and figure out just how all those address sharing sensors are behaving. 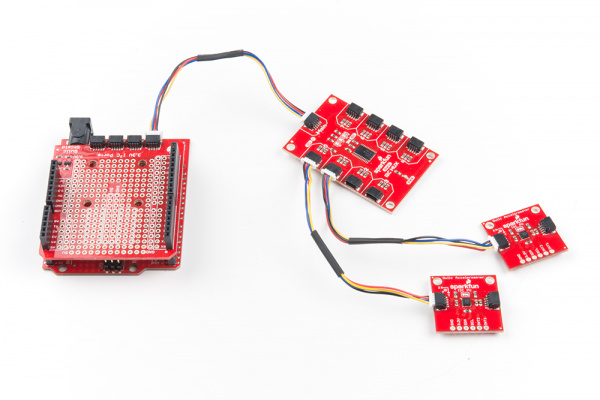 Revision Update: Users can now daisy chain the Qwiic Mux in between other Qwiic boards. 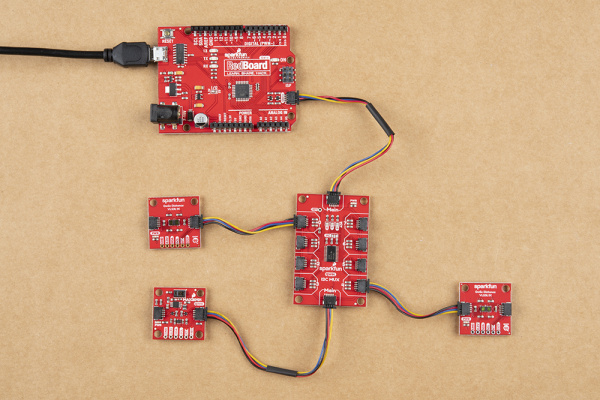 Note: This board and the Python package have not been tested on the newly released Raspberry Pi 4 because we don't carry it in out catalog yet.

Update: This board and the Python package have been verified to work with the Raspberry Pi 4.

With the Qwiic connector system, assembling the hardware is simple. In addition to the Qwiic Mux, you will need: a Qwiic cables, a SparkFun Qwiic pHAT for Raspberry Pi, and a Raspberry Pi setup with the Raspbian OS, monitor, and standard peripherals. (*If you are unfamiliar with the Qwiic pHAT, you can find the Hookup Guide here.)

Note: The peripheral Qwiic boards attached to the Qwiic Mux are not necessary for this hookup guide, but they are useful for customers looking to verify the functionality of the Qwiic Mux. Use channels 0, 4, and 7 for the examples below. 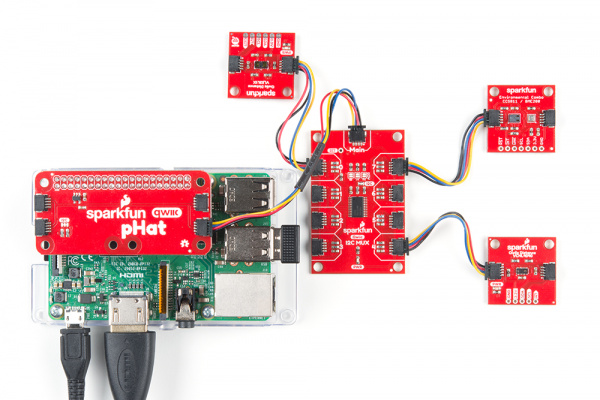 Raspberry Pi 3B connected the Qwiic Mux with a Qwiic pHAT and Qwiic cable (and a few peripheral Qwiic Boards).

Revision Update: Users can now daisy chain the Qwiic Mux in between other Qwiic boards. 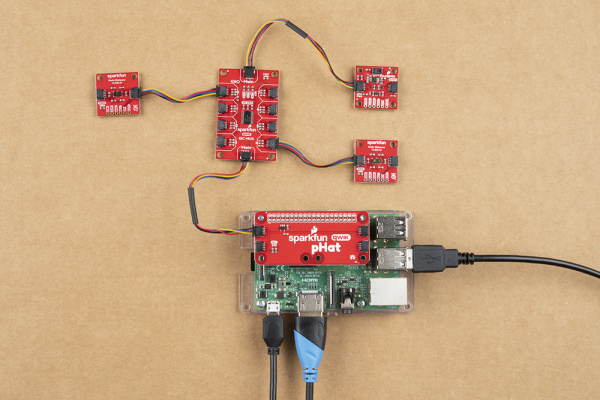 Alternatively, you can also use another Qwiic adapter like the Pi Servo pHat instead. 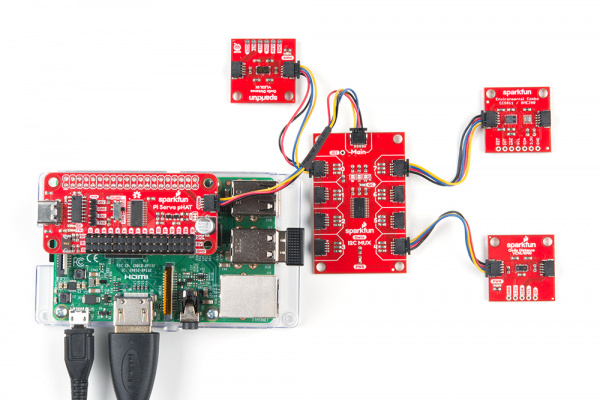 Raspberry Pi 3 connected the Qwiic Mux with the Pi Servo pHat and Qwiic cable (and a few peripheral Qwiic Boards).