Python is generally more popular as a sequential programming language that is called from the command line interface (CLI). However, several frameworks exist that offer the ability to create slick graphical user interfaces (GUI) with Python. Combined with a single board computer, like the Raspberry Pi, this ability to build GUIs opens up new possibilities to create your own dashboard for watching metrics, explore virtual instrumentation (like LabVIEW), or make pretty buttons to control your hardware. 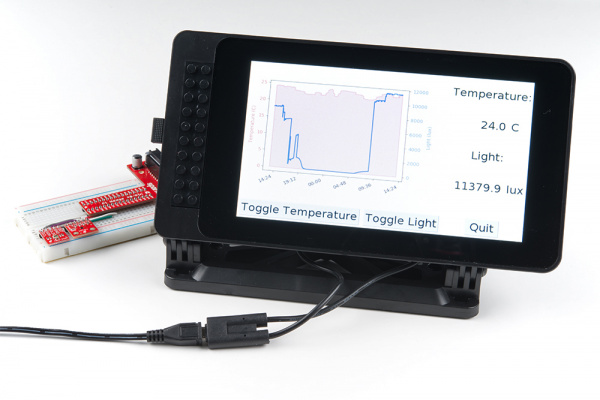 In this tutorial, we'll go through the basics of Tkinter (pronounced "Tee-Kay-Inter", as it's the "TK Interface" framework), which is the default GUI package that comes bundled with Python. Other frameworks exist, such as wxPython, PyQt, and Kivy. While some of these might be more powerful, Tkinter is easy to learn, comes with Python, and shares the same open source license as Python.

Later in the tutorial, we'll show how to control various pieces of hardware from a Tkinter GUI and then how to pull a Matplotlib graph into an interface. The first part of the tutorial (Tkinter basics) can be accomplished on any computer without special hardware. The parts that require controlling hardware or reading from a sensor will be shown on a Raspberry Pi.

To work through the activities in this tutorial, you will need a few pieces of hardware:

Note: As an alternative, you could also use the the Qwiic cables and the Qwiic TMP102 to easily connect without needing to solder or connect to the four pins.

Note that for this tutorial, you will need access to the Raspbian (or other Linux) graphical interface (known as the desktop). As a result, the two recommended ways to interact with your Pi is through a monitor, keyboard, and mouse or by using Virtual Network Computing (VNC).

With Single-Board Computers (SBCs) on the rise, it is a good idea to have an easy way to interface with them. Operating on a …

The SmartiPi Touch is a case and stand for the official [Raspberry Pi 7" Touchscreen LCD](https://www.sparkfun.com/products/1…

Before diving in to Tkinter and connecting hardware, you'll need to install and configure a few pieces of software. You can work through the first example with just Python, but you'll need a Raspberry Pi for the other sections that involve connecting hardware (we'll be using the RPi.GPIO and SMBus packages).

Tkinter comes with Python. If Python is installed, you will automatically have access to the the Tkinter package.

Follow the steps outlined in the Prepare Your Pi section of the Graph Sensor Data with Python and Matplotlib tutorial to install Raspbian and configure Python 3. You will only need to perform the last "Install Dependencies" step if you plan to replicate the final example in this guide (integrating Matplotlib with Tkinter).

Using the Preassembled Pi Wedge to prototype with the Raspberry Pi B+.
Favorited Favorite 7

Learn how to setup, configure and use the smallest Raspberry Pi yet, the Raspberry Pi Zero - Wireless.
Favorited Favorite 17

This guide will show you how to write programs on your Raspberry Pi using Python to control hardware.
Favorited Favorite 27

Use RealVNC to connect to your Raspberry Pi to control the graphical desktop remotely across the network.
Favorited Favorite 8

Use matplotlib to create a real-time plot of temperature data collected from a TMP102 sensor connected to a Raspberry Pi.
Favorited Favorite 14
Please note: If you have trouble seeing any of the images throughout this tutorial, feel free to click on it to get a better look!