The Arduino-standard Blink sketch won't have any visible effect on the Pro Micro -- there's no LED on pin 13. In fact, the only LEDs on the board are the power indicator, and RX/TX blinkies. Unlike other Arduino boards, though, we can control the RX/TX LEDs in our sketch. So let's get blinking!

Copy and paste the code below into the Arduino IDE. Make sure to select the correct board and COM port that your respective board enumerated to. Finally, upload [1] it to your Pro Micro

With the code uploaded you should see the RX and TX LEDs take turns blinking on and off every second. You can also open up the Arduino IDE's serial monitor (set to 9600 bps) and see every programmer's favorite two-word phrase. 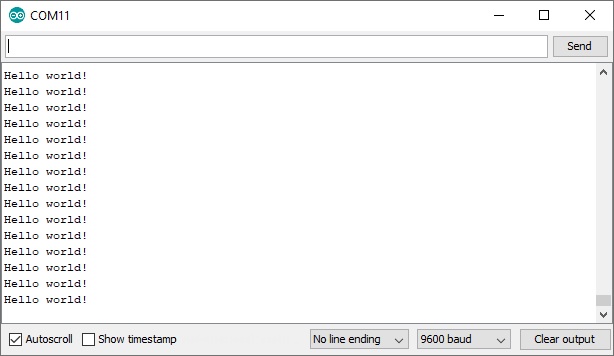 The RX LED is tied to Arduino's pin 17. You can control it just as you would any other digital pin. Set it as an OUTPUT, and digitalWrite([pin], [level]) it HIGH to turn the LED off or LOW to turn the LED on. Here's part of the code highlighted.

The TX LED was not provided as an Arduino-defined pin, unfortunately, so you'll have to use a pair of macros to control it. TXLED1 turns the LED on, and TXLED0 turns the LED off. Here's part of the code highlighted.

In that sketch, you'll also notice a pair of Serial initialization statements:

That "1" makes a huge difference. Think of the Pro Micro having two separate serial ports. The one without the "1" is for communication to and from the computer over USB; this is what is visible in the Serial Monitor. The Serial1 port is a bonafide, hardware UART, where your Pro Micro can talk to any serial-enabled piece of hardware.

If you open up the Serial Monitor, you should only see Hello world! printed. 'Hello! Can anybody hear me?' is being sent out over the hardware UART, where, presumably, nothing is listening. This begs the age-old question: "If a Pro Micro is saying 'Hello!' over the hardware serial port, and nothing is there to hear it, does the Pro Micro really say anything at all?"

Why Does My Board Re-Enumerate Every Upload?

What this all boils down to is the fact that you have to be patient with Pro Micros. Every time you upload a new sketch, your OS will need to work its driver magic before you can open up the COM port. This can take a few seconds after the code has finished uploading.

[1] Note for Windows users: The first time you upload a sketch, it may fail and give you an error. On top of that Windows will pop up that familiar 'Device driver software was not successfully installed' notification. Don't let this worry you too much. If you get the error, wait about a minute, and try uploading again.

Hopefully the upload will succeed the second time, but if it continues to fail, check out the how to enter the bootloader section of the FAQ. Windows needs to install the same driver we've already installed for the Pro Micro's bootloader, but it's unable to get everything set up before the bootloader exits.