The SparkFun Photon RedBoard is an over-the-air-programmable WiFi development board that is compatible with the Particle cloud. At the heart of the Photon RedBoard is Particle's P1 module, which packs an ARM Cortex M3 processor and a Broadcom WiFi controller into a single chip. The I/O, USB, and power connectors are all broken out to a familiar Arduino shape. 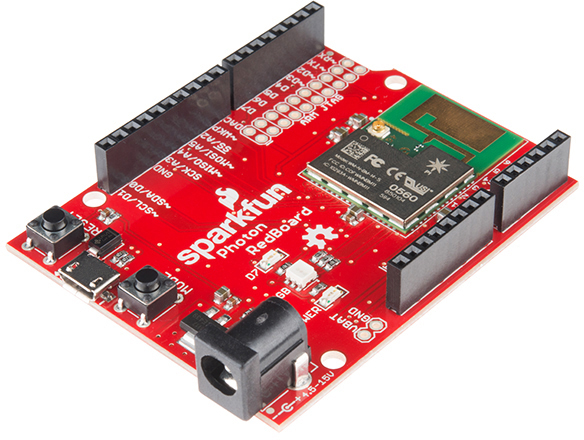 Aside from the form-factor, the Photon RedBoard is nearly identical to a Particle Photon: same microprocessor, an RGB LED to indicate connectivity or other states, and RESET and MODE buttons to help configure the chip.

The purpose of this tutorial is to familiarize you with all aspects of the Photon RedBoard -- both hardware and software -- and to help get you started down the path of Photon development. The tutorial is broken down into a handful of sections, including:

Use the navigation bar on the right to find your way through.

This tutorial builds on a few electronics concepts you should be familiar with. If any of the topics below sound foreign to you, consider checking out those tutorials before continuing on.