The SparkFun OpenScale makes reading load cells easy. Attach a four-wire or five-wire load cell of any capacity, plug OpenScale into a USB port, open a terminal window at 9600bps, and you’ll immediately see mass readings. To learn more about load cells see our tutorial on Getting Started with Load Cells. This board also has the Load Cell Combinator built in so you'll be able to read four load sensors as 1 load cell as well. 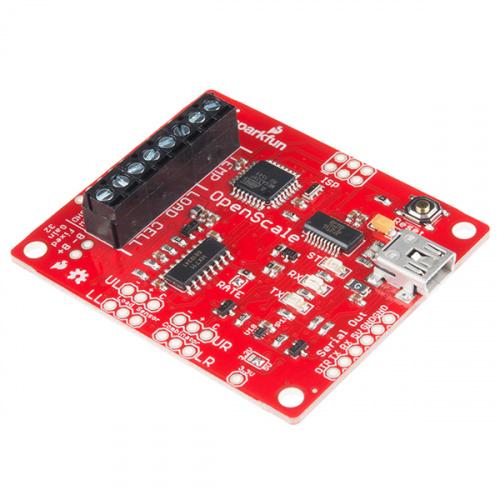 The SparkFun OpenScale is a simple-to-use, open source solution for measuring weight and temperature. It has the ability to r…

OpenScale combines the HX711 breakout board with an Atmega328P running Arduino and extensive pre-loaded configuration firmware to create an off-the-shelf solution for load cell reading.

OpenScale was designed for projects and applications where the load was static (for example a bee hive) or where constant readings are needed without user intervention (for example on a conveyor belt system). A load cell with OpenScale can remain in place for months without needing user interaction.

OpenScale makes it easy to zero and calibrate your scale via a simple to use configuration menu. Serial output and control is available through the mini-B USB port or through an FTDI compatible connection. This allows OpenScale to be attached seamlessly with a datalogger (OpenLog) or to a wireless Bluetooth transmitter (such as SparkFun Bluetooth Mate Silver). In the bee scale application , OpenScale is hooked up to Blynk Board and the data collected is pushed to a data-streaming services.

OpenScale is fully open source hardware and software. OpenScale comes with a Arduino Uno compatible bootloader (STK500, 115200bps, 16MHz). Making modifications to the firmware is as easy as loading new code onto an Arduino. You can find the all the source in the OpenScale repository on GitHub.

We will just be hooking up a load cell with the OpenScale's HX711 amplifier, and showing how you would hook up four load sensors. To follow along, you'll need:

If you are planning on using load sensors, you will need to obtain or purchase four units to connect the single strain gauges into a wheatstone bridge type load cell. (Single strain gauge load cells only have three wires instead of four.)

If you aren't familiar with the following concepts, we recommend reviewing them before following along with the project example at the end of the tutorial.

A tutorial defining what a load cell is and how to use one.
Favorited Favorite 26

A hookup guide for the HX711 load cell amplifier breakout board
Favorited Favorite 7
Share
Use this URL to share: