If you're interested in building a MIDI synthesizer, the MIDI Shield is quite capable. There is an example in the Forty Seven Effects documentation that uses the Arduino tone library as a simple MIDI instrument. We're going to build a little more ambitious system, that allows us to play the Moog Werkstatt with real keys. This is useful because the Werkstatt is usually played with an array of tiny tactile switches.

The Werkstatt is a good candidate for this project because it has a header on which it receives external control voltages. We'll be generating the following voltages:

This project requires the following parts.

It also needs a MIDI keyboard controller and a MIDI cable.

Construction and testing is a little more involved that the other two projects.

First, we need a ground wire in the Werkstatt. In this case, a green wire is wrapped around one of the screw posts inside and out through a gap in the front of the chassis. 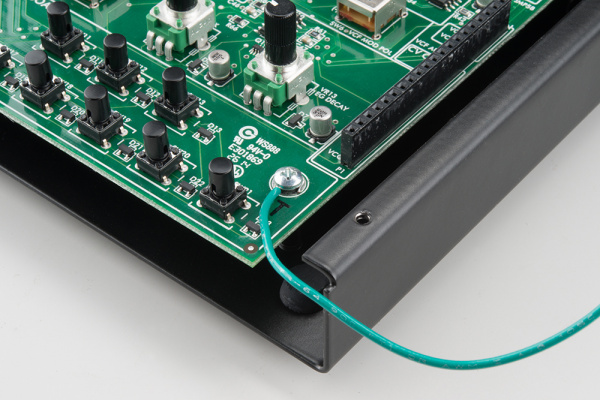 After that, prepare the DACs, and put them on the proto shield. The DACs come configured using the same I2C address (0x60) -- on one of the DAC breakouts, cut the traces on the pullup resistor jumper on the back of the board, and switch its address to 0x61 by switching the ADDR jumper to VCC. 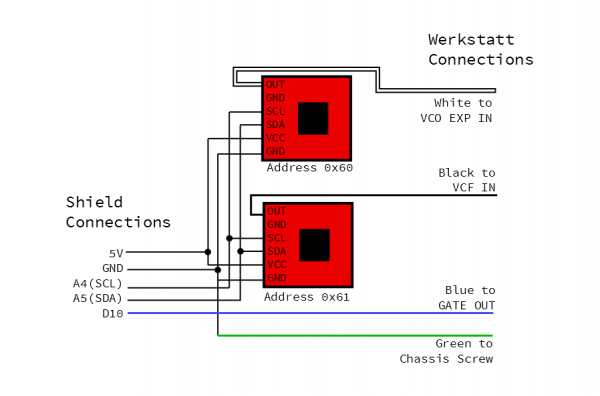 The two DACs are soldered onto strips of breakaway headers and then onto the proto shield. The following connections were made on the shield with wire: 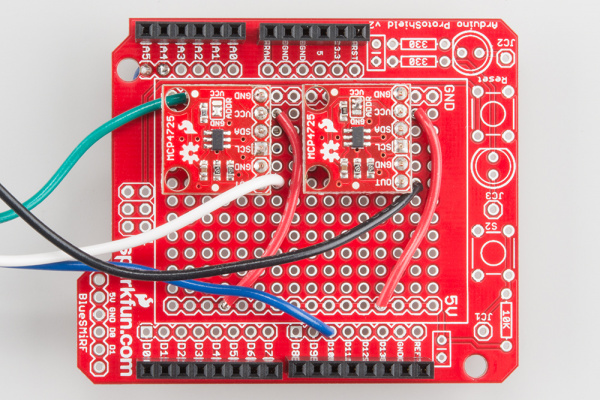 Once the DACs are wired onto the protoshield, put the shield on the RedBoard to test them. Loading the DAC Integration Test sketch to verify that they're working. It verifies that they're working correctly and communicating on the correct addresses by generating opposing full-scale sawtooth waves. 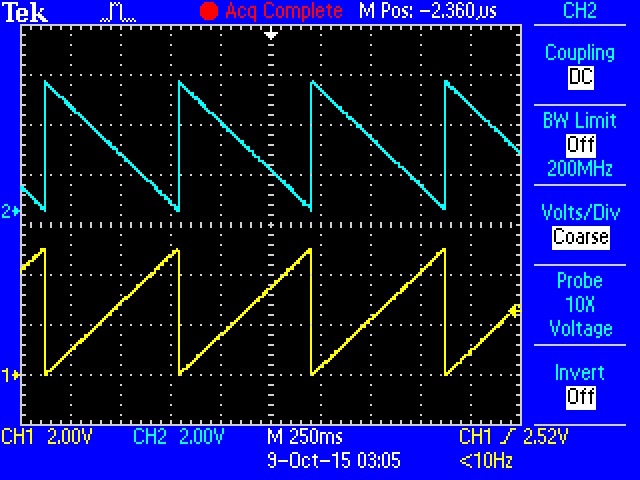 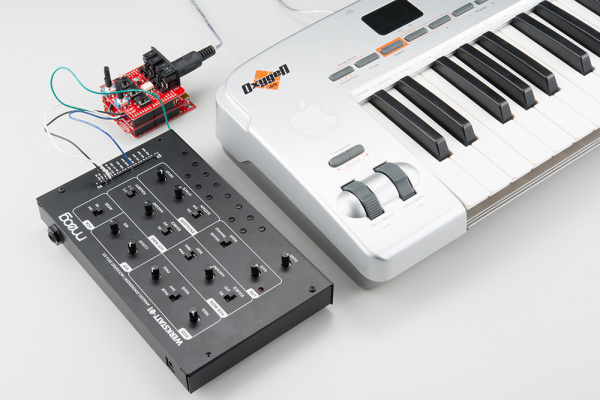 The firmware for this project is a little more complex, requiring ancillary *.CPP and *.H files. Get all three files from the GitHub folder for the project, and store them in a directory named MIDI-CV. When you open MIDI-CV.ino, it should also open notemap.h and .cpp. Compile and load the sketch, then press some keys on your MIDI controller.

This example uses a more sophisticated interface to the 47 Effects library: rather than polling the library for new messages, it installs callback routines for the relevant message categories. It's also configured to listen in Omni mode - it should respond to messages on any MIDI channel.

With a range of 5V to work with, the design target was to have 4 octaves of control voltage, plus roughly +/-1/2 octave bend range. If multiple keys are held, the CV represents the lowest note.

The MIDI-CV sketch includes a fun bonus -- an arpeggiator! If you hold more than one controller key at a time, the converter will periodically cycle between the keys. 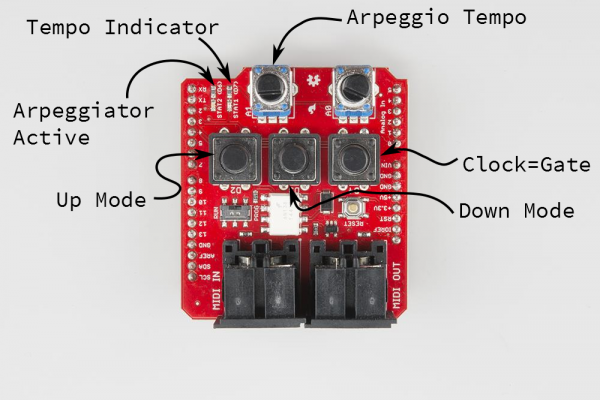 The convention for control voltage is that increasing the voltage by one volt will cause the pitch to raise by an octave; 1/12th of a volt (0.08333V) corresponds to a semitone.

The DACs are also referenced to VCC on the board, nominally 5V in this case. Different power supplies will change the scaling of the CV -- the test unit behaved a little differently when powered from the USB connection (yielding VCC of 5.065 V) and from a 9V wall-wart supply plugged into the barrel jack (resulting in VCC of 5.008 V). When you adjust the scaling, it's important that you're powering the system as it will be deployed!

The intonation can be adjusted at both ends of the interface described here. Trimpot VR5 in the Werkstatt allows for Volt-to-Octave adjustments. In the Sketch, the constant DAC_CAL is also used to change the CV scaling. Since it's adjustable at both ends, it can lead to confusion if you start adjusting them at the same time.

The key to preventing that confusion is remembering the Volt/Octave convention. Independently adjust each end of the interface so that volts and octaves correspond. We calibrated the system using the following procedure:

If you want to enable debug printing: