If you are already familiar with programming Arduino for a while, read on for some additional notes about the LilyPad USB Plus. It's similar to other Arduinos, but has some special features and limitations you'll want to know about.

Using a Battery and Battery Charging

SparkFun sells a number of LiPo batteries compatible with this board. If you are new to the LilyPad system, we recommend the E-Textiles Battery. If you're supplying your own battery, use a single-cell (3.7V) LiPo battery with a JST connector.

Batteries with larger capacities (measured as amp-hours or Ah) will run the board longer before needing recharging. How long will depend on how many LEDs your program turns on, etc. If you're just running a few LEDs, you can expect the board to run about 5 hours for every 100mAh of battery capacity.

To recharge an attached battery, plug the board into a USB power source. 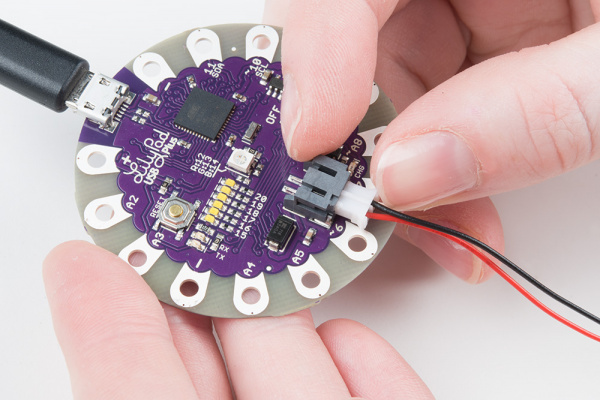 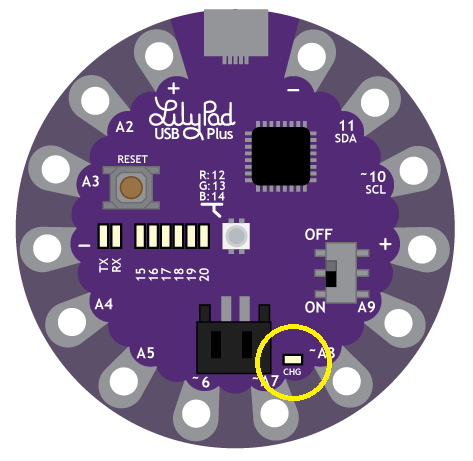 Location of the "CHG" LED

It is safe to leave a LiPo battery attached to the board permanently, even with USB power applied. The battery will not be overcharged.

The battery connector can be tight; to remove a battery never pull on the wires. Use a pair of needle nose pliers or cutters to gently hold pull the plug out of the connector.

Tip: There are two small "nubs" on the top of the plastic battery connector that can be shaved off with a hobby knife to make the battery easier to remove.
Always turn the LilyPad off before inserting or removing a battery. 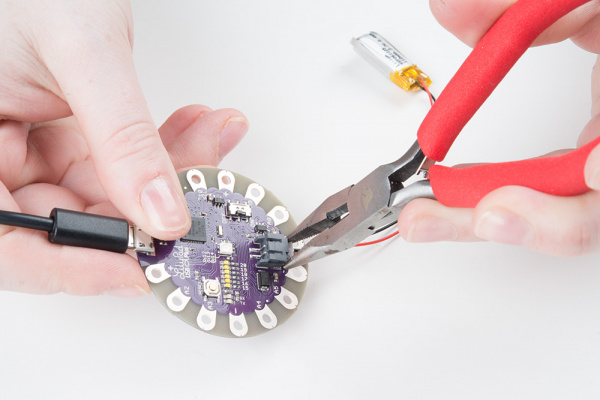 Below is a list of the LilyPad USB Plus I/O pins and each function.