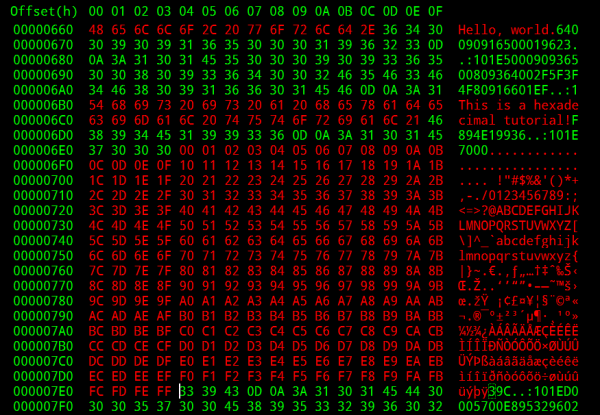 This page covers the very basics of hex, including an overview of the digits we use to represent hex numbers and tools we use to indicate a number is a hex value. We also cover very simple "decimal-to-hex" conversion in the form of hexadecimal counting.

Decimal and hexadecimal have 10 digits in common, so they can create a lot of similar-looking numbers. But 10 in hex is a wholly different number from that in decimal. In fact hex 10 is equivalent to decimal 16. We need a way to explicitly state whether a number we're talking about is base 10 or base 16 (or base 8, or base 2). Enter base subscripts:

Hexadecimal 10, indicated by a subscript 16, is equivalent to decimal 16 (notice the subscript 10).

As you'll see further down, subscripts aren't the only way to explicitly state the base of a number. Subscripts are just the most literal system we can use.

Counting in hex is a lot like counting in decimal, except there are six more digits to deal with. Once a digit place becomes greater than "F", you roll that place over to "0", and increment the digit to the left by 1.

Let's do some counting:

"BEEF, it's what's for dinner". Am I channelling my inner Sam Elliott (McConaughey?), or expressing my hunger for the decimal number 48879? To avoid confusing situations like that, you'll usually see a hexadecimal number prefixed (or suffixed) with one of these identifiers:

There are a variety of other prefixes and suffixes that are specific to certain programming languages. Assembly languagues, for example, might use an "H" or "h" suffix (e.g. 7Fh) or a "$" prefix ($6AD). Consult examples if you're not sure which prefix or suffix to use with your programming language.

The "0x" prefix is one you'll see a lot, especially if you're doing any Arduino programming. We'll use that from now on in this tutorial.

By now, we know how to convert about 16-or-so values between decimal and hexadecimal. To convert bigger numbers, here are some tricks we use.

Converting from decimal to hex involves a lot of division and remainders. If you've pushed long division out of your brain, wiki's always there to help you brush up.

The steps to convert a number, let's call it N, from decimal to hex look something like this:

There's an ugly equation that rules over hex-to-decimal conversion:

To convert a hexadecimal number to decimal, you need to plug in values for each of the h factors in the equation above. Then multiply each digit by its respective power of 16, and add each product up. Our step-by-step approach is:

Here's an example of a four-digit hexadecimal value, 0xC0DE, that we want to convert to decimal. Creating a table and sorting the digits into separate columns can make the conversion process easier:

This table method is perfect for keeping all of your hex digits, positions, and powers-of-16 in line. To convert larger hex numbers, just add a columns to the left and increase n.

Now that you know how to do it by hand, save yourself a little time and use a calculator.

Breathe easy! We've gotten the hard conversions out of the way. We use hex in electrical and computer engineering because it's incredibly easy to convert to and from binary -- the 1's and 0's language of computers.

Converting between hex and binary is easy, because each digit of a hexadecimal number "maps" to four bits (a bit being an individual binary digit) of a binary value. So a byte -- eight binary digits -- can always be represented by two hexadecimal digits. This makes hex a really great, concise way to represent a byte or group of bytes.

Converting from Binary to Hex

Let's begin by mapping the first 16 hexadecimal values to binary.

As you grow, and continue to use hex and binary, these 16 values will become ingrained in your brain. Those are the key to converting between hex and binary.

To convert between binary and hex, we want to take advantage of the fact that four binary digits (bits) map to one hex digit. Follow these steps to convert from binary to hex.

To begin, start at the far-right of the binary number, and sort the 1's and 0's into groups of four:

Now consult our big table-o'-sixteen to convert the groups-of-four to a hex digit:

Converting from Hex to Binary

Converting from hex to binary is a lot like converting binary to hex. Simply take a hex digit and turn it into four binary digits. Repeat until your number is full of 0's and 1's.

To convert 0xDEADBEEF (a commonly used code to indicate a system crash), begin by sorting the digits into "bins":

Then convert each hex digit into four bits:

Use Hex to Represent and Identify Bytes

The examples above show off one of hex's greatest powers: easily representing values of bytes. Hex is often easier for us to work with because the values are shorter and more memorable than a long string of 1's and 0's.

For example, the register map above is from the LSM9DS0 (a nifty, 9DOF sensor). It lists register addresses, which are used to control the sensor, in both hex and binary. If you want to access the CTRL_REG2_G register, it's much easier to remember 0x21 than 0b010001, and discovering a typo in the hex value is much easier than in binary. For that reason, we're much more likely to use hex values in our code than their binary equivalents.

If you're overdosing on long division, trying to convert decimal to hexadecimal, or getting lost trying to calculate powers of 16, give these calculators a try.

Entering a number into any of the boxes below will automatically update the others with the matching value. You can type a hex value in, to convert to binary and decimal. Or type a decimal or binary number to generate a hex value. Use it as you please!

This calculator requires Javascript. If it isn't working, make sure JS is enabled (if'n you please).

Understanding how hexadecimal works is key to so many areas of electronics and programming.

Armed with your shiny, new hex knowledge, here are some related tutorials you may want to check out from here: 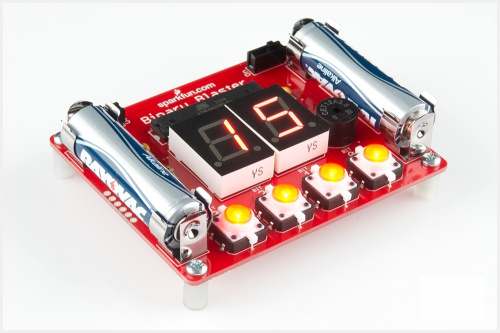