In this tutorial you'll learn how to use GPS receivers to have two objects, a base and a target, point towards one another. This can be used to aim sensors, antennas, lasers, etc. from one object to another over long distances.

GPS technology is a very useful and elegant technology. The satellites used in the GPS network do most of the work so that the GPS receiver can be made small and simple. As GPS technology becomes more and more accurate, applications in many areas have really taken off. Some of these include driver-less cars, mission planning for UAVs, assisted landing of commercial aircraft and many more. GPS receivers vary in cost depending on accuracy and what other functions they provide, so the right receiver needs to be chosen for the desired application. In this project, I am demonstrating that an expensive receiver is not necessary to create an amazing project.

This project began as a proof of concept for the ANACONDA 2014/2015 Aerospace Senior project whose mission was to:

“Design and construct an autonomous tracking and communication support system for an antenna to be used to track unmanned aircraft during flight.”

If you want to check out this and other projects, follow the link below to the CU senior projects page, and go to the 2015 projects page. 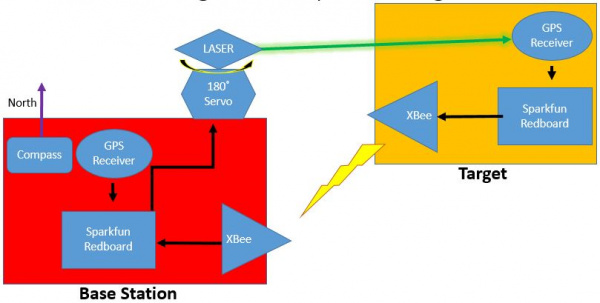 Block diagram of the system described above.

Knowing the horizontal and the vertical difference between points, you can use the inverse tangent function to give you the pointing angle needed to control the mechanism. See the image below. 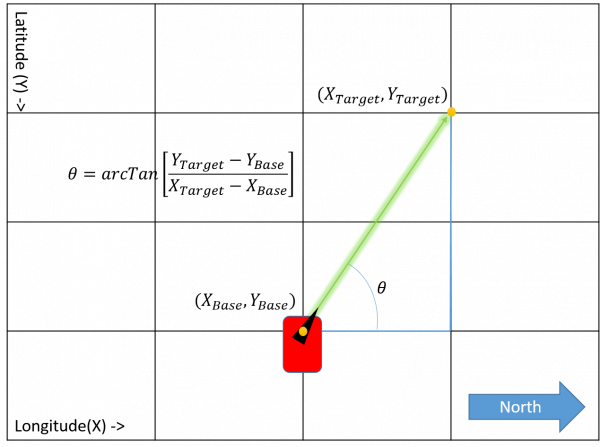 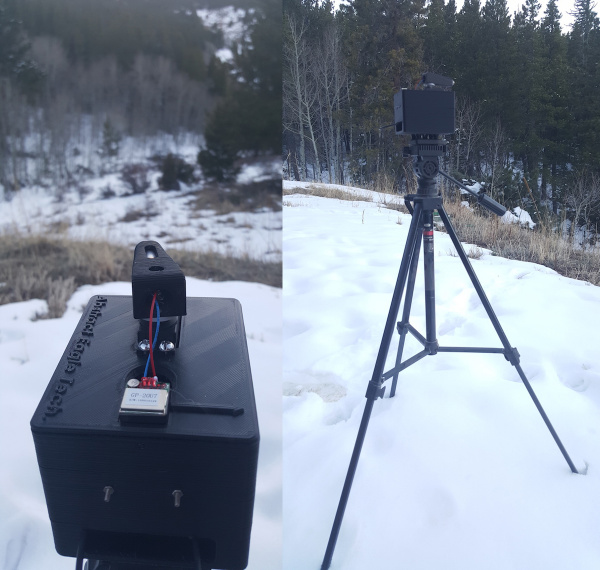 The Target (left) and the Base Station (right).

The image above shows the GPS antenna pointed down. Ideally, you would want to point the ceramic antenna facing the sky to receive the best satellite reception. In this tutorial, the satellites in view was sufficient enough for the project to function. Make sure to mount your GPS receiver with the antenna pointed toward the sky.

This tutorial will go over how to replicate this system.

To follow along with this tutorial, we recommend the following supplies:

Here is a list of all the SparkFun materials you will need for this project:

You will need some hardware to mount electronics in the final system:

A custom enclosure was created for each piece in this project. These files are provided in the link below, if you wish to download and print them. These files can also be found in the 3D Models section.

Before embarking upon this tutorial, you may find the following links useful:

How to get started with an XBee Shield and Explorer. Create a remote-control Arduino!
Favorited Favorite 13

If you have not done so already, the 3D model files can be downloaded from the following link. 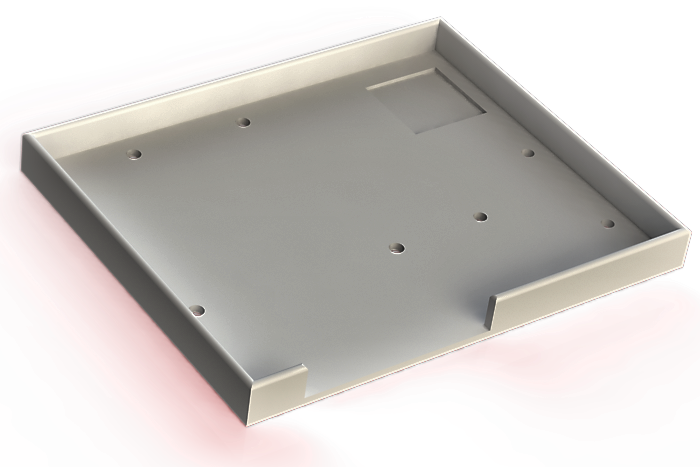 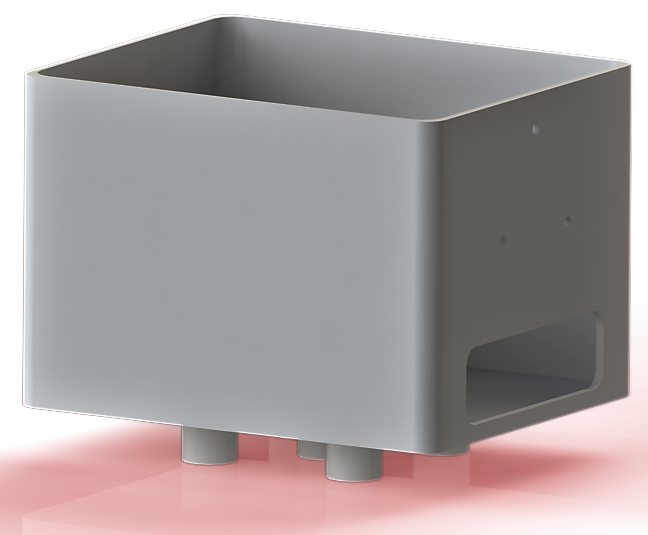 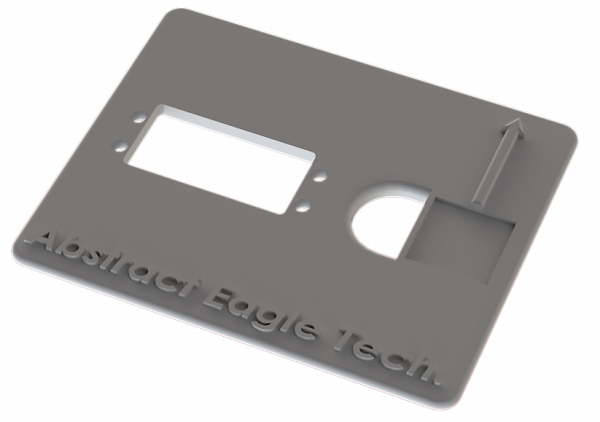 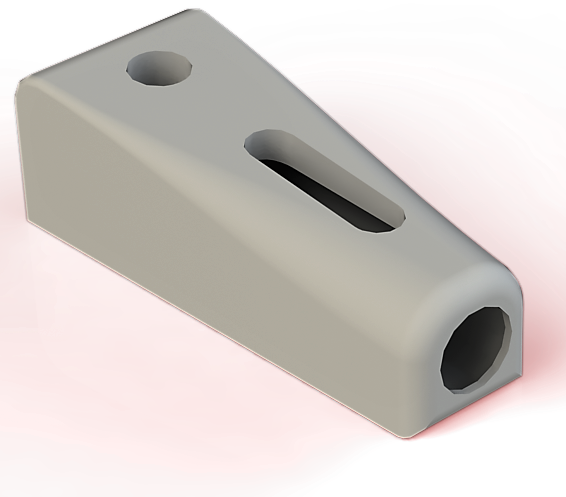 All the electronics in this project plug directly into pins on the XBee Shield (with the exception of the laser diode), which makes this part pretty straightforward. I have designed this mechanism so that the connections are not permanent and can be taken apart, but you can solder the connections instead, if desired.

The first step is to configure both XBees so that they are set up on the right channel. This is described in detail in this tutorial.

Once everything is configured, you will need to create two identical assemblies of the RedBoard with the XBee shields attached. Stackable headers will need to be soldered onto the XBee Shield, so that it can be mounted on top of the RedBoard and wires can still be attached. A detailed walk-through of this process is described here. 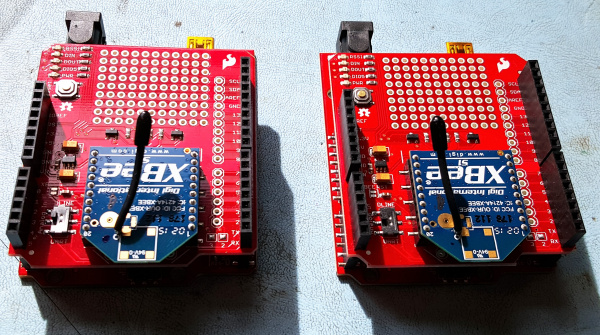 Note: You will have to take off the XBee Shields to mount the RedBoards in the final system.

Next, prepare the wires of the two GPS receivers and the servo so they can easily be plugged into the shield. I cut off the existing connectors and soldered them to male jumper wires for easy pluggability. The wires for the target GPS receiver can be made shorter so you don't have excess wire. Make sure you leave enough length to reach the pins from where the receiver will be mounted. The last step will be to connect the Laser diode. To do this, you will first need to solder stranded wire to the two holes located on the laser PCB. Ensure they are attached to the correct pads, as shown here. Take care when soldering these pads as too much heat can damage the laser electronics. 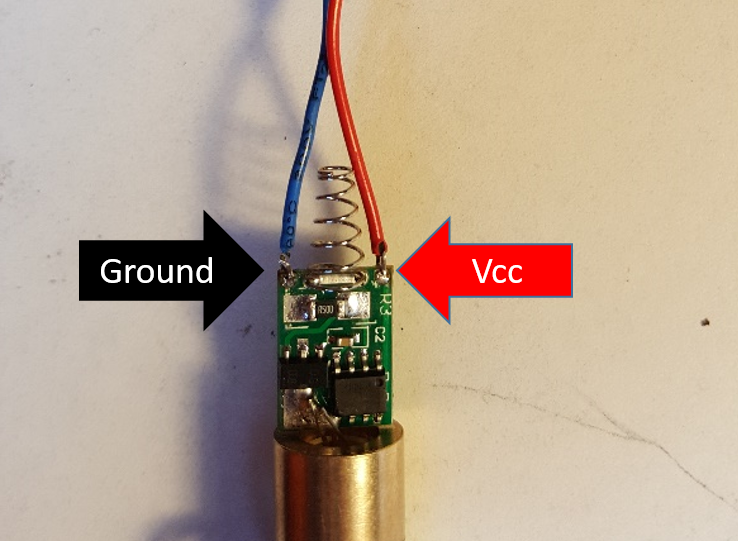 Because the laser will be moving, these wires should be soldered rather than just plugged in. This will be done on the XBee shield used on the Base. The following diagrams show how everything should be connected. Note that the LED in the diagram represents the laser.

This section will cover how to install the electronics in the 3D printed enclosures.

Attach the RedBoard to the base using 32-56 ¾” machine screws with the three spacers in between so it is elevated off the bottom of the case. This is to ensure that the mounting hole is available, which you may need depending on your tripod mounting situation. 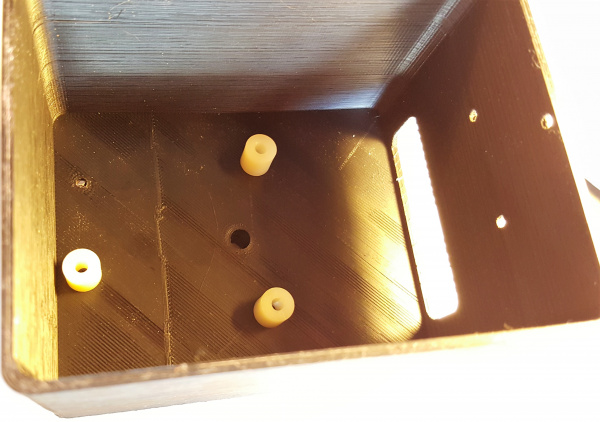 Connect the 9V battery. Mount the battery enclosure onto the holes located on the wall of case. 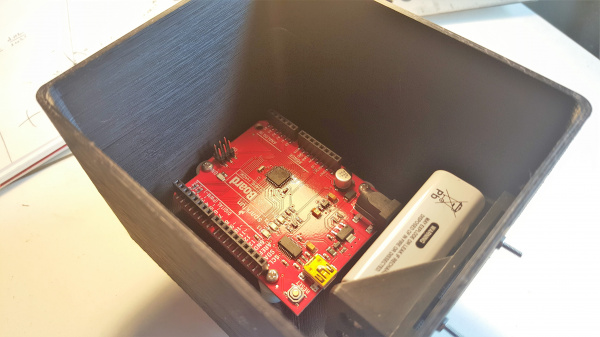 Depending on your tripod, this step may be different. The tripod used in this guide had a piece with the mounting screw that can be threaded into the available mounting hole and works quite nicely.

Place the servo in the available cavity with the gear closer to the GPS cavity. Once in place, screw the four 8-32 screws into the available holes on the servo. You shouldn't need nuts for the other side since the holes are close fit and the ABS used is soft and allows them to easily thread themselves into place. If the servo moves around too much, you can add nuts for stability. 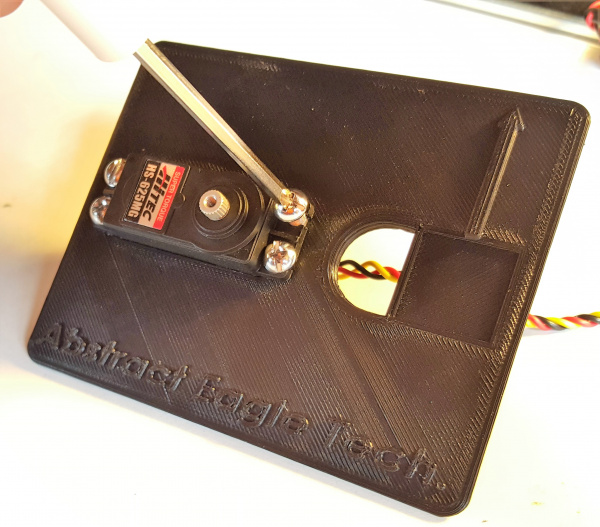 Attach the circular servo disk (a.k.a. horn) to the laser mount aligning the hole on the bottom of the laser mount with the hole on the disk. Attach this by placing two 0-80 Flathead screws through the countersunk holes within the laser cavity. You may need to open up the holes on the circular wheel since they will be used as pins, and you will not be able to screw them in. These are to ensure that the two parts are connected in the right orientation, and, if loose, you may need to use an adhesive to attach these. 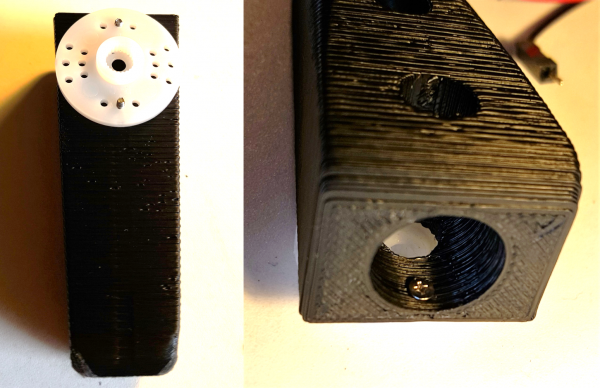 Next, attach this assembly to the servo. Slide the circular disk back onto the servo, then screw it to the servo, using to the available hole in the laser mount to access it with a screw driver. 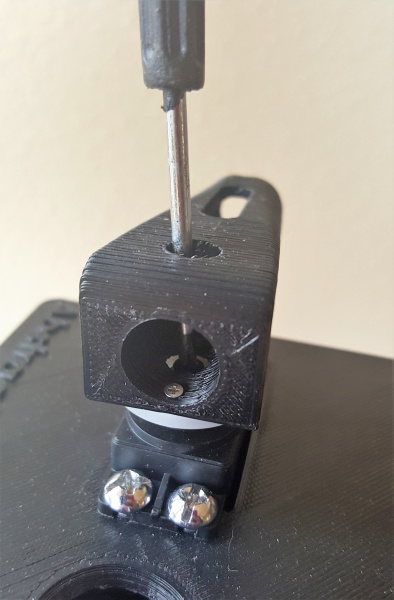 Heads up! At this point, it is best to ensure that the servo is going to sweep the full 90 dgrees in a symmetrical fashion. The Sweep example sketch, which comes with the Arduino IDE by default, can help you out with this. Make sure the servo is in its center position when you mount the laser enclosure. Any error can throw off the whole system. 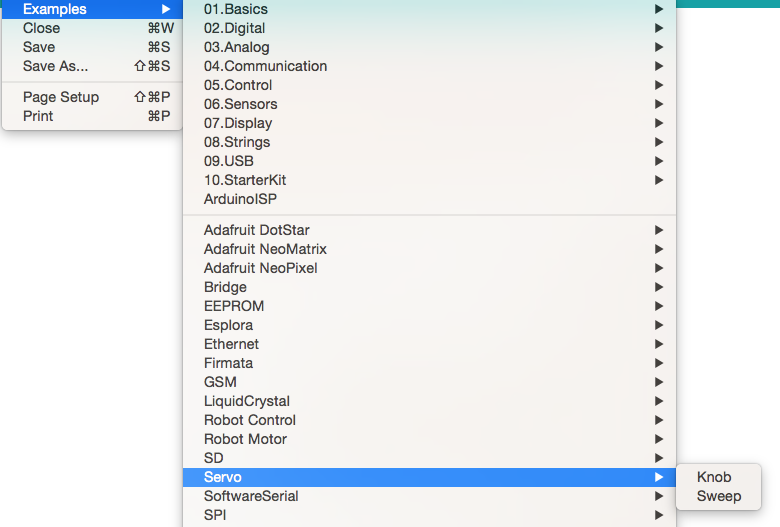 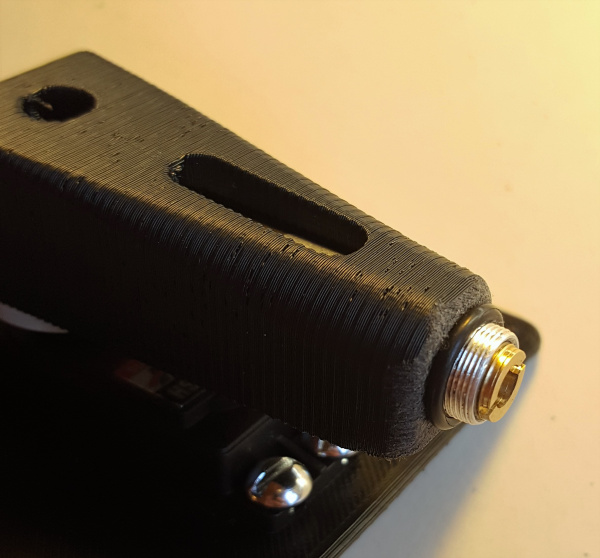 Attach the GPS receiver tot he indent made on top of the case. Again, make sure the wires stay inside the enclosure. 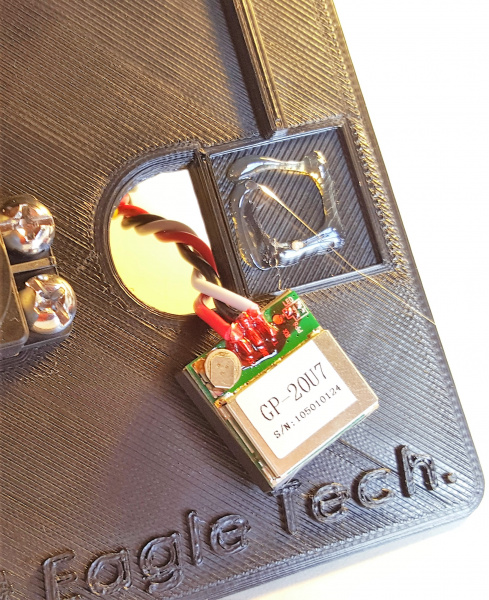 Attach the XBee Sheild to the RedBoard, if you haven't do so already, connect the wires, and you are good to go.

Place the bare RedBoard in target case so that the USB port is facing the opening, and place 3 2-56 ¾” Machine screws into any three available holes. Use the corresponding nuts to secure them in place from the back.

Attach the 9V Battery holder using 3 1-72 ½” flathead screws, and secure them using the corresponding nuts on the back. 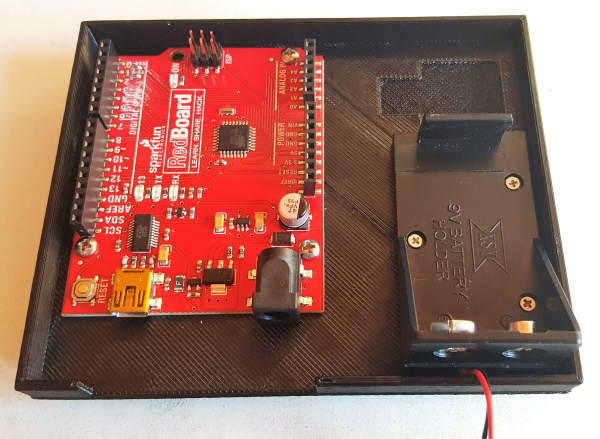 There is a cavity made for the GPS receiver sunk into the base. Use a glue gun or other adhesive method to hold it in place. Once everything is attached, place the XBee Shield back on the RedBoard and connect everything as shown in the Electronics Assembly section. 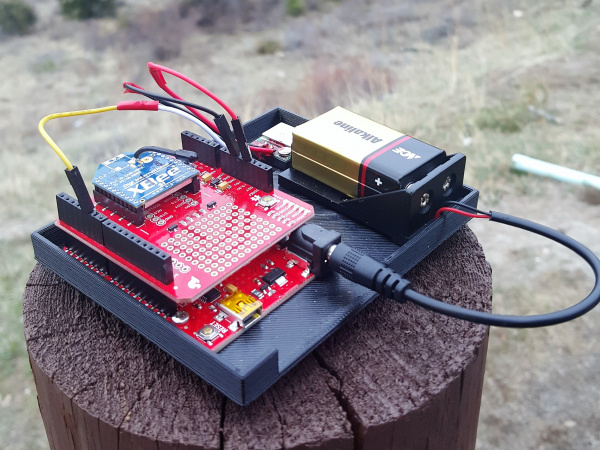 Here is the basic code to get this system functioning. You will need to upload the files to their respective systems. There is a lot of room for you to play around with these to improve the speed or accuracy of the system. You will also need to include these libraries, which, depending on what version of the Arduino IDE you have installed, may already be included as a default library.

For help installing external Arduino libraries, visit this tutorial. Once all the libraies are installed, program each sketch from below on to the respective RedBoard.

To ensure the system aligns with the earth's frame of reference and is in the correct orientation, use the compass to line the arrow on the Base Station top with true North. Once powered up, both systems will sit idle as they acquire a satellite lock. Once both have established a lock, which may take up to a minute, the servo will point to where it interprets the target object is. This will update continuously to point at the most recent location of the target object. If the angle is substantially off or the servo is maxed out in one direction you might need to make sure the whole system is pointing in the right direction since it is limited in which direction it works.

Warning! Laser can be harmful to eyes so if you are the one holding the target object it would be a good safety measure to have laser glasses for 532nm wavelength.

Final Base (right) and Target (left).

The code for this project can be found on the GitHub Repository.

For more GPS fun, check out these other SparkFun tutorials:

This tutorial shows how to get started with the SparkFun GPS Shield and read and parse NMEA data with a common GPS receiver.
Favorited Favorite 6

This is a GPS controlled clock - a clock you truly never have to set! Using GPS and some formulas, we figure out what day of the week and if we are in or out of daylight savings time.
Favorited Favorite 13

How to assemble and hookup the SparkFun GPS Logger Shield. Never lose track of your Arduino again!
Favorited Favorite 5
Share
Use this URL to share: