The Galileo is Intel's toe-dip into the Arduino waters. It features their Quark SoC X1000 processor -- a relatively new, x86-based, low-power embedded system-on-a-chip. The 32-bit processor can run at up to 400MHz, and it has 512 KB SRAM built-in. The Galileo board supports the Quark with a wide range of external peripherals. 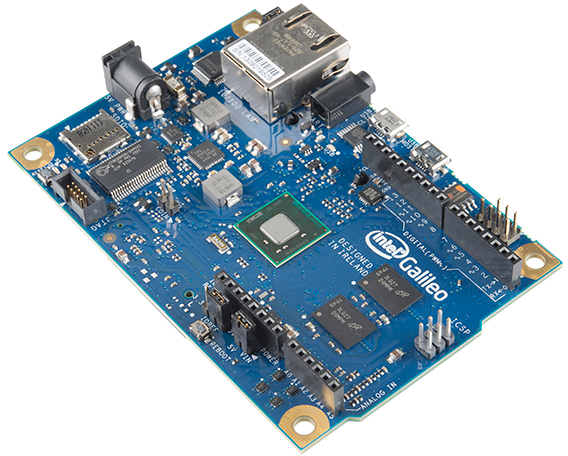 As far as memory goes, the Galileo has a lot of it. There's 8MB Flash (to store firmware), an 11KB EEPROM (non-volatile memory), and a µSD socket (which supports up to 32GB µSD cards). In addition to the memory, there are all sorts of peripherals: 10/100Mb Ethernet, USB 2.0 host and device ports, an RS-232 port, and a mini PCI Express (mPCIE) socket. Plus it has that same, familiar Arduino pinout we all love/hate. The Arduino pins -- including six analog inputs, SPI, I2C, UART, and PWM outputs -- are all exactly where an experienced Arduino user would expect them to be.

What the Galileo tries to do is meld the ease of Arduino's hardware manipulation with the power of a fully operational Linux operating system. Most sketches written for Arduino Unos, Leonardos, and other boards can be ported directly over to the Galileo. You still have access to popular Arduino libraries like SD, Ethernet, WiFi, EEPROM, SPI, and Wire, but you can also access the Linux side of the board with system() calls. The Linux half of the board supports stuff like Python, Node.js, SSH, Telnet, and all sorts of other, fun Linux stuff.

This tutorial will provide a rundown of every step required to get your Galileo up and running. From sitting there, blinky-less on your desk, to running an Arduino sketch and interacting with a Linux terminal. In all, we'll cover:

Before delving into this tutorial, there are a few concepts you should be familiar with, including: