Here's an overview of the connectors and parts surrounding the Quark processor to form the Galileo board: 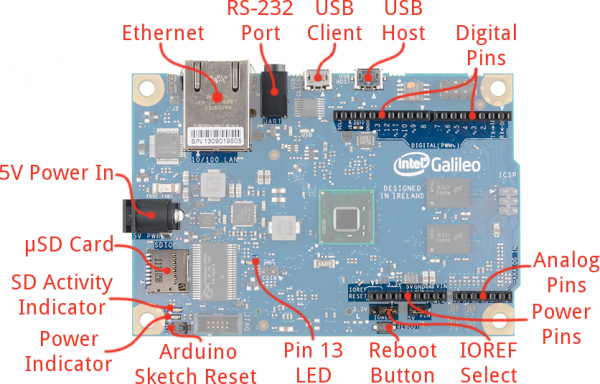 The top side of the Galileo is where the vast majority of the action is, including:

Flip the Galileo over to find the one highlight on the bottom side of the board: the mini PCIe (Peripheral Component Interconnect Express) socket. This socket is most useful for attaching WiFi cards to give your Galileo easy, wireless network access. 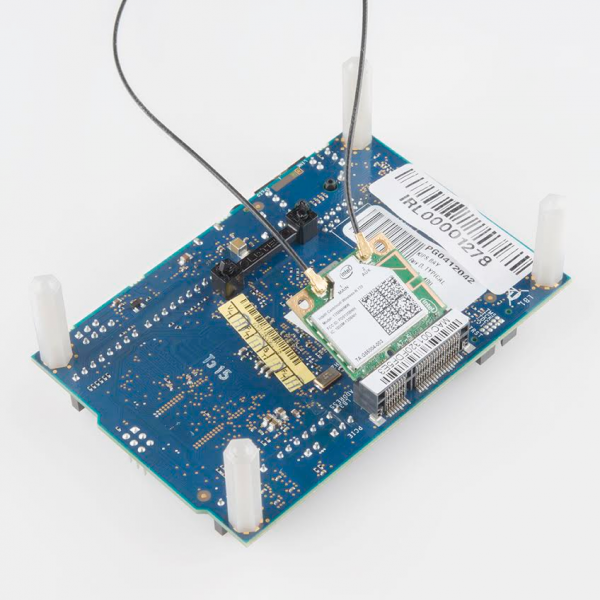 A half-size, mini PCIe WiFi card attached to the mating socket on the bottom side of the Galileo.

The Galileo can (supposedly) be powered via USB (on the Client port), but Intel recommends against that. Instead, the board should be powered through the barrel jack, using a regulated 5V DC power supply.

The Galileo includes a "universal" wall adapter, which should work for just about anyone. If you're using your own supply, make sure it can supply up to 3A. And remember that 5V is the max and min on that supply input. Don't throw a 9V or 12V wall adapter on there and expect the magic smoke to stay inside.

The heart of the Galileo is the stylish Quark SoC X1000 processor. This is a 32-bit processor built on the x86 architecture. The Quark X1000 features:

The Quark X1000's focus is embedded computing -- wearable devices, Internet of Things, autonomous vehicles, or all sorts of other applications. It's intended to be a low-power, x86-based option for that variety of projects.

The Quark X1000 is an x86, which makes it unique in today's single-board computer market. Most popular SBCs -- including the Raspberry Pi, Beaglebone Black, and pCDuino -- are all driven by ARM-based processors. x86 processors are usually used in desktop computers, running Windows or OS X, because they're faster and more powerful. ARM processors, on the other hand, are more often used in portable electronics because they're more power-efficient.

Intel's Atom and Quark products try to combat the high power consumption. They're directed at the mobile market. But they're still x86 architectures, and they'll still consume more power.