Let's get your RedBot moving! Let's start by writing a few lines of code to make your robot drive forward and stop.

To help us out, we are going to utilize parts of the RedBot library. To do this, we need to add a line at the top of our code #include <RedBot.h>. (Remember, Arduino code is case sensitive. This must be typed in exactly the way it's shown here -- otherwise it won't work.) This "#include" statement will allow us to create a RedBotMotors object that has methods (functions or behaviors) for driving and controlling the RedBot.

This line creates an object called motors that allows us to control the right and left motors and drive the robot. See more details below in the Code to Note section.

Before uploading this example code, make sure that the RedBot is in a safe position. The program will start immediately after uploading, and it might drive off your desk, knock over your drink, or stomp through your lunch. We suggest standing the RedBot upright on the flat edge of the rear end so that the wheels are off the table.

Note: When uploading, the power must be on, the motors must be connected, and the board must be powered by a battery. Also, the motor switch should be set to RUN.

Upload this code onto the RedBot.

Go to File > Examples > SparkFun RedBot Library > Exp2_DriveForward or copy and paste the example code below: 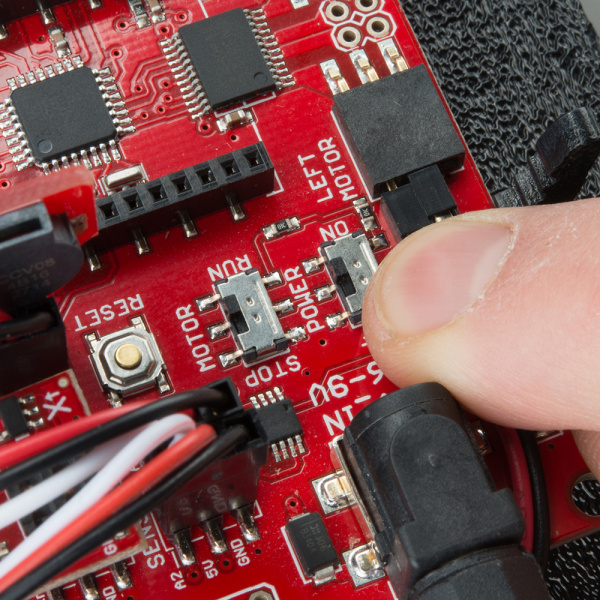 Unplug the USB cable from your RedBot and set the RedBot on the floor. Hit the reset button to manually restart your program and watch your RedBot go!

How far did your RedBot move? How long does it drive for? (Can you verify this with a stopwatch?) Be sure to run a few trials. What is the average speed of your robot?

Curious on how motors work? Visit our Motors and Selecting the Right One to learn more about different types of motors and how they work!

Adding the #include <RedBot.h> to the top of your code gives us access to a number of classes, functions, objects, and methods that make controlling the RedBot much easier. The RedBot library has custom routines for creating objects such as:

Recall that this line declares an object called motors using the RedBotMotors class. This is sometimes called "instantiating" an object. Now, we can use any of the methods that are a part of this class. To use (or "call") a method, the command will start with motors. followed by the name of the method. Let's look at a few examples:

Sometimes running the motors at full power causes the wheels to spin-out. If you notice traction issues, you may want to try playing around with slower speeds.

motors.stop() turns off power to both motors and coasts to a stop.

Sometimes, you might want a more precise stop. the RedBotMotors class also has a brake() method that forces the motors to come to a more abrupt stop.

Try replacing the motors.stop() with motors.brake() in your example code. Measure the distance your robot travels. How much farther does it travel when it "coasts" compared to "braking"?

Now that you have control of driving the robot, see if you can get your robot to drive forward for 1 second, stop, and reverse for 1 second. Repeat your test a few times. Does your robot always return to where it started?

We'll use this motorPower later.

We've already seen two functions used in every Arduino sketch -- setup() and loop(). Arduino contains a wealth of built-in functions that are useful for all kinds of things. Visit the Arduino site for a list. In addition to these, you can also easily create your own functions. First, we need to declare & define the function.

When you write your own functions, you make your code neat and easy to re-use. Visit the Arduino FunctionDeclaration page for more information about functions. Every function declaration has the following format:

The return type is void if the function does not return a value or any information. In this case, driveDistance() will simply execute some commands. The functionName will be used in your code to call or reference your function, and the parameters are values or information that you will pass into the function.

In this example, this function will use the the average speed you calculated above to make motion planning easier. It computes the delay used for the driveTime based on a given distance by re-arranging the equation above to: time = distance / avgSpeed

Create a data table like this to track your results.

Compile Error -- 'RedBotMotors' does not name a type

This indicates that the RedBot library is not properly included into your sketch. This is usually a result of one of two things:

My RedBot moves, but spins in a circle!

My RedBot is not driving straight! It drives in a curve!