Zigbee, like thread is an alliance of over 200 companies which have collaborated to develop a robust and simple network for home and industrial automation.

Zigbee was created for the sole purpose of serving the home and industrial automation, so the design goals are set in accordance to that:

ZigbEE specifications fills in the gap left by the 802.15.4 to create a true mesh network but also supports other topologies like Star and Tree. 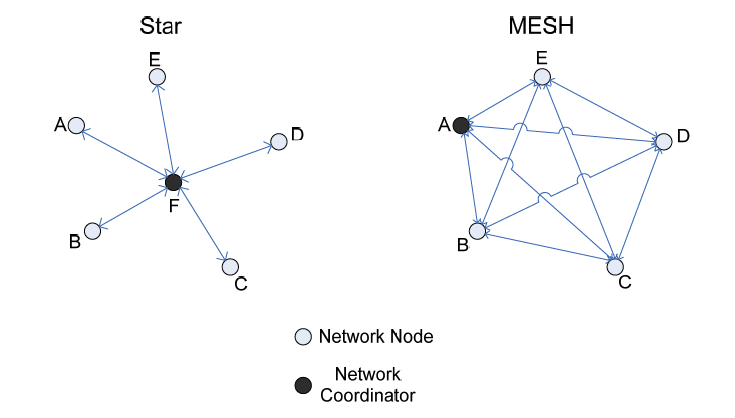 Devices in a Zigbee Network

There are three types of devices as defined by the Zigbee protocol:

The coordinator is the brains of the Zigbee network, it commissions devices to the network, stores the security keys and also bridges to other networks. There is only one Zigbee Coordinator in any network.

Zigbee Networks may have several routers to serve as intermediate routers or to transmit data within the network.

The end device can only talk to the parent node ( router or coordinator). It cannot talk to other end devices directly. Similar to Thread, these devices are designed by keeping in mind that they spend most of their life times in sleep mode and only wake up to transmit data to the parent.

ZigBee assumes the channels from 11-26 in the 2.4GHz radio band used by most radios. The ZigBee channels have been specifically spaced as to co-exist with Wi-Fi channels without interference, if the channel assignments of both the networks are properly.

ZigBee standard faced a big challenge when Thread came into existence in 2014. The ZigBee Alliance has then pushed to introduce their newest protocol called the ZigBee 3.0. They have tried to address the areas, where thread and other networks were better alternatives in the home automation space.

ZigBee 3.0 came with additional features such as ZigBee RF4CE and ZigBee Green Power.

ZigBee RF4CE - was developed to replace the IR remote with radio based remotes. This is aimed at making an universal remote controller that could be used to control your remote and as well as lights, lamps etc. Also this does away with the point and shoot limitation of IR.

ZigBee Green Power - was developed as an ultra-low power standard to support energy harvesting devices. It ensures very low power consumption by managing the network as such that these devices can be off for the most time.

One major feature that put ZigBee behind thread was IP compatibility. ZigBee 3.0 on the other hand is fully IP compatible. So you can now connect your ZigBee devices to the internet via a router.

Advantages: Pretty much the same as thread

Xbee's by Digi International are radio communication modules which support the Zigbee Protocol. They can also be loaded with firmwares to support Zigbee Pro and DigiMesh.

To get a quick taste of Xbee, you can check out the following tutorials.

How to get started with an XBee Shield and Explorer. Create a remote-control Arduino!
Favorited Favorite 13

Getting started with the Teensy 3.1 / Teensy 3.2 and XBee. Establishing a serial link.
Favorited Favorite 3
Share
Use this URL to share: