Thread is an open standard for reliable, cost-effective, low-power, wireless D2D (device to device) communication. It was designed specifically for connected home applications.

It came into existence in 2014, when the Thread Group was formed. It now has big organizations like Google, Samsung, Qualcomm, and ARM to design and develop the Thread protocol. 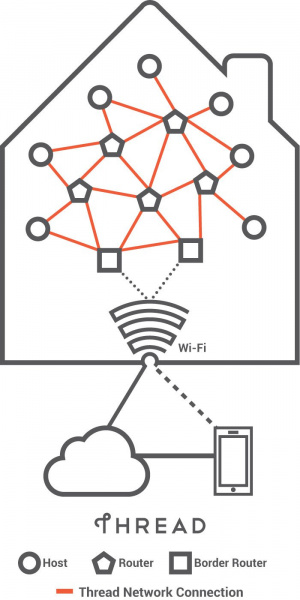 Nest uses Thread network for its Thermostat and Nest Cam products. Thread is designed while keeping in mind the home automation space -- to have devices set up and connect easily, have low power consumption for longer battery life and be secure!

It is based on the standard 802.15.4 (6loWPAN) architecture. The best part about Nest is that it is an open protocol that has Internet Protocol version 6 (IPv6) built in.

The Thread protocol defines the three main types of devices in the network:

Thread has a system with a special type of router called the border router, which provides connectivity from the 802.15.4 network to adjacent networks on different physical layers (e.g., WiFi, ethernet). If one border router fails, another router in the network can assume the role of a border router, ensuring the robustness of the Thread protocol.

Routers, as the name suggests, provide routing services to the network devices. They are used in commissioning new devices to the network. Generally routers are always active, but they can downgrade to become REEDs (Router-Eligible End Devices). These devices are not used in routing or data transfer in the Thread network but as a redundant end point that can be called to assume the role of a router when needed.

These are the end points of a Thread network, also called host devices. Host devices are the individual IP-addressed functional equipment like thermostats, security cameras, heaters, etc. These devices can also be referred to as a sleepy child or sleepy node. The router paired directly to the sleepy device is called the parent. The sleepy devices (end points) spend most of their time in the sleep mode and only wake up to transmit data. They only communicate through the parent device (e.g., the Nest thermostat is a sleepy end device).

A typical send cycle for a device might be:

In contrast to WiFi, which uses infrastructure mode, Thread uses the ad-hoc mode of networking.

As Silicon Labs and NXP are part of the Thread Alliance, they are pushing development boards that support Thread protocol.