As complicated as it may seem, it is one of the simplest communication methods, which is what makes it ubiquitous and yet invisible. It is used not only in tracking consumer products worldwide, but also in tracking vehicles for toll collection. Hospitals use it to track their patients, and farmers to track their cattle. RFID technology has become a part of our lives, and we might not even be aware of how it affects us.

Simply put, we can think of RFID tags as a close replacement to Universal Product Code or the bar code. But they are more efficient.

The RFID tags have read and write capabilities over traditional bar codes. They can be updated, changed and locked.

The tags are the end points in an RFID system. They store identity information along with other information as required by the purpose of the tag. There are two types of tags:

** Inside of an active RFID tag -- note the on-board battery** 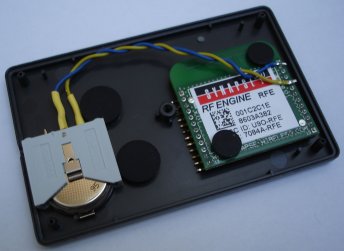 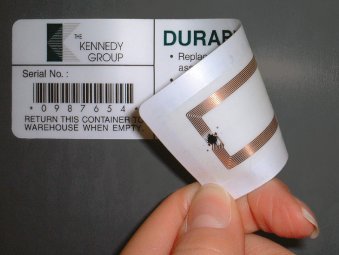 Readers have a similar construction to an RFID tag. They have an antenna to receive and transmit signals to/from the tags. They might be either battery powered or plugged in to a wall outlet, as a reader requires strong RF signals to activate the tag (for passive) when it comes in the vicinity of the reader. The reader is connected to a reader controller, which manages the information read by the reader. The reader may also write or update a tag depending on the application. For example, the reader in subway stations is at the entry point. When the rider places a card (tag) on the reader, it reads the available money in the card and grants the user entry. At the passenger's exit, it calculates the fare and updates the amount on the card.

The reader, along with the tags, form an RFID system.

The image above shows a very basic RFID system. The tag chip is the Integrated Circuit in the RFID Tag. This IC delivers computation, memory and extended features to the tag. The tag chip has an antenna to receive or transmit the information of the tagged item. The receiver's antenna receives the RF signal and might also provide excitation to a passive RFID tag. The read information is fed to a reader control and management software. 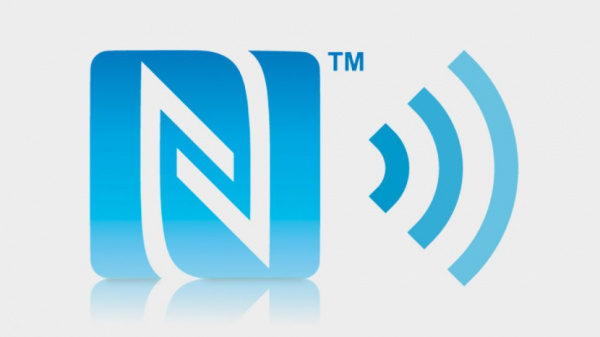 Near-Field Communication (NFC) is an RF-based communication protocol. It is a subset of the RFID protocol, which is why it is similar to RFID but has significant differences. NFC has also become a very popular technology, and 9 out of 10 smartphones today are shipped with NFC capabilities. This has enabled contact-less payments such as Apple Pay and Google Wallet.

NFC smartphones pass along information from one smartphone to the other by tapping the two devices together, which turns sharing data such as contact info or photographs into a simple task. Applications like Android Beam facilitate this, whereas in Apple phones NFC can only be used for Apple Pay as of now.

NFC is being used to open car doors in NFC-enabled car keys with car manufacturers such as BMW. You might have also come across advertisements and marketing content that requires you to tap or wave your NFC-enabled smartphone to download an application or get more information about a product.

NFC is designed for very short-range communication (a few centimeters). It is one of the most power-efficient communication protocols. NFC also operates in the 13.56 MHz band, which is used by high-frequency RFID as well. Therefore, NFC can also read HF RFID tags.

NFC has two types of devices (one thing to note is that, in NFC, the device can act as a tag or a reader):

Due to the inherent similarity between these two communication protocols, we often find ourselves asking the differences in the technologies. 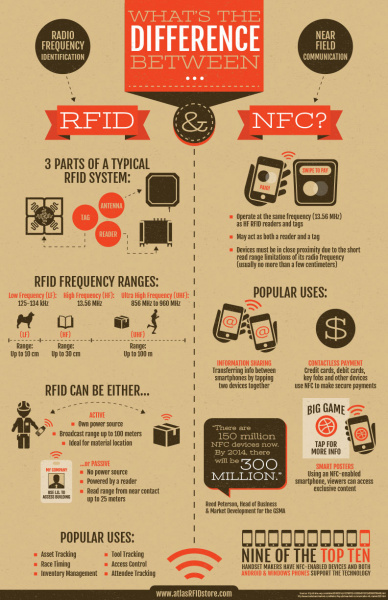 Since both NFC and RFID are omnipresent technologies, used with a large set of objects and devices around us, they both are useful protocols when it comes to IoT. These protocols provide a bridge to various objects around us by not just communicating within the tag and the reader but connecting all of them to the internet.

Here are links to a few tutorials and blog posts you might want to review to learn more:

Learn the basics of how to get started with the SparkFun RFID Starter Kit.
Favorited Favorite 11
Share
Use this URL to share: