It is important to understand the various network protocols we will mention.

Network topology is the way in which various elements are arranged in any network. It defines physically or logically the structure of the network. I like to view it as a pictorial representation of the network elements and how data moves through them.

Again, there are a bunch of possible network topologies, but we will keep our scope limited to the ones you would see most often when dealing with IoT-based communication protocols:

P2P is the simplest topology and has a permanent link between two endpoints. The simplest example of P2P would be the connection in the paper cup-and-string telephones that you might have had fun with as kids, where two nodes (or endpoints) have a dedicated channel for communication. Using switching technologies, P2P can be set up dynamically. Switched P2P topology was the basis of the early telephony. 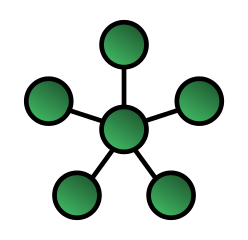 In the star network configuration, every node (endpoint) connects to a single central device. The nodes cannot directly communicate with each other; they communicate through the central device. The central device acts as a server, whereas the nodes act as the clients. This is one of the most common configurations and one of the easiest to set up. It is simple to add and remove devices without disrupting the network. The biggest challenge with this kind of network is it has a single point of failure (i.e., the central computer); if the central computer fails, the network fails.

Mesh is the type of network where each node is connected to every other node. A mesh network provides a high amount of redundancy when it comes to network links. Even if one link fails, the nodes can communicate using another link. This is not the most commonly used network topology for obvious reasons of increased costs to establish the redundant links and the complicated nature of the network.

Hybrid networks, as the name suggests, are combinations of two or more basic network topologies. It could be a star-mesh network or a star-ring network. Hybrid networks prove to be more flexible and reliable, as they come with the best of both worlds. But at the same time, they have increased complexity, which makes them expensive to set up and difficult to manage. However, hybrids have their benefits when we require a network with the capabilities of more than one network topology.