Map Between What the Camera Sees and What the Projector Projects

Now that we've found what we're looking for (in this case faces), it's time to build the image we want to project back into the world. If you think about it, we don't want to project the image captured from the camera back out into the world. If you were standing in front of the camera and projector, you wouldn't want the image of your own face projected back on top of it in addition to the sprite we will add. To overcome this, we will create a black image that matches our projector resolution that we will add our sprite into. This is where using a monitor instead of a projector changes our setup a little.

If you'd like to continue using a monitor, I'd suggest cutting out a small printout of a head and taping it to something like a Popsicle stick. As you move the head around in front of the monitor, our project should move the sprite around behind it. 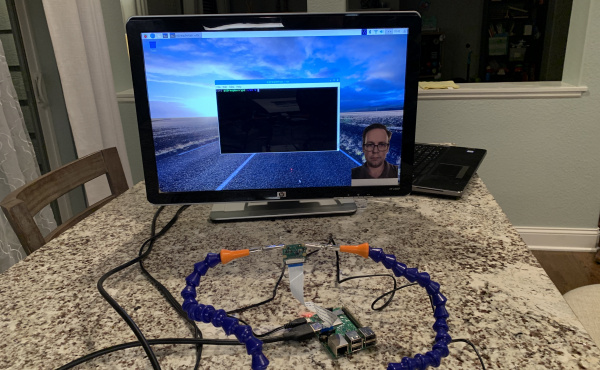 Where we need pixel values, I used the numpy function interp():

Other places I just multiplied by the a scale ratio:

where mark is a detected face object provided by dlib, and d_width and f_width are the same as above.

We want to avoid fractional pixels, so it's good to cast our interpolated points to an int() so they have no decimal points.