The SparkFun 2D Barcode Scanner Breakout is a nifty little breakout board featuring the DE2120 barcode scanner module from DYScan. The DE2120 reads 20 different barcode symbologies (both 1D and 2D) using a camera coupled with on-board image processing to identify and decode everything from UPC codes to QR codes. The module also features two LEDs: one for illumination and one to project the red line for "aiming" that you're used to seeing from laser-based scanners. 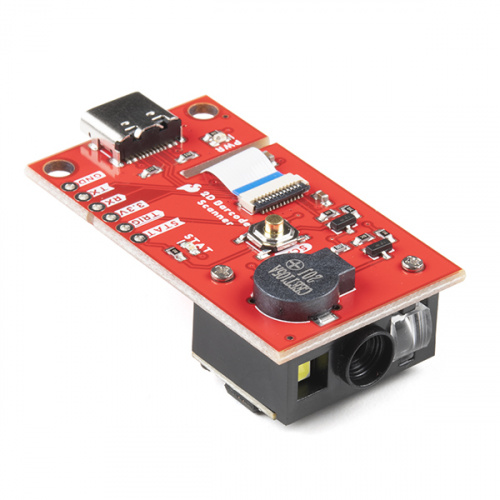 This tiny "scan engine" will read 20 different barcode symbologies — both 1D and 2D!

The breakout makes it easy to use the scanner module by connecting the scanner's USB serial output to a USB-C connector. The breakout also includes a standard 0.1"-spaced PTH header for the power, serial UART, trigger and status output connections. On top of that, we've added a trigger button, buzzer and status LED connected to the appropriate drive circuits to easily initialize scans and receive feedback from scanning barcodes.

You'll need a few things along with the 2D Barcode Scanner Breakout to follow this tutorial. You may not need everything though depending on what you have already so add anything you need from the items below to your cart.

The 2D Barcode Scanner Breakout can work as a USB device connected to a computer (PC or Single-Board like the Pi) with a USB Type-C cable.

If you want to use the 2D Barcode Scanner Breakout with a Pi, the options below can get you started:

The breakout can also communicate with a microcontroller like an Arduino through the serial UART pins and other dedicated pins on the breakout's PTH header.

Using the breakout's PTH header requires some assembly and soldering. You may already have a few of these items but if not, the tools and hardware below will help with that assembly:

This tutorial will show you how to communicate with your serial devices using a variety of terminal emulator applications.
Favorited Favorite 47
Share
Use this URL to share: