Regional Configuration: The (ported) basicmac library includes configurations required for the SPI pins use by the NM180100 to connect the Apollo3 MCU to the SX1262 module. Additionally, it also contains modifications to pre-configure the library to use the SX1262, the US LoRa frequency band, and defaults to a spreading factor of 7 (SF7).

Lines 36-43 in the target-conf.h file used to configure the regional settings. (Click to enlarge)

On lines 36-43, users will find the available regional options. To make the required modifications, users simply need to comment in/out their configuration choice and save the file, before uploading their code. (*It is recommended that users also close and re-open the Arduino IDE before uploading their code, to ensure the modifications are in place.)

Register a Device on The Things Network

Registering a Device on The Things Network:

Learn how to make a LoRaWAN node for your next long range IoT project and connect it to the internet with The Things Network!
Favorited Favorite 10

Using the super blazing, nay blinding, fast SAMD21 whipping clock cycles at 48MHz and the RFM96 module to connect to the Things Network (and other Radio woodles).
Favorited Favorite 5
Credentials:

A screen shot from the Device Overview page with labels. (Click to enlarge)

For more information, feel free to utilize the documentation from The Things Network to:

Once users have a device registered on The Things Network, the example code will need to be downloaded and a few modifications are required before uploading.

Lines 36-47 of the example code, need to be modified to hard code the credentials required for the payload from the node to be passed to The Things Network:

Lines 62-64 of the example code, are used to set the transmission intervals between payloads:

Lines 329-336 of the example code, is where the contents of the payload can be modified. The contents of the transmission on can be viewed on The Things Network through the Application Data page, once the node begins broadcasting. To access the Application Data page, click on the Data tab from the Device Overview page on The Things Network console.

Before You Upload the Code

Regional Configuration: Before uploading the code, be sure to make any necessary regional configuration changes, as mentioned at the beginning of this section, to avoid breaking any laws.

Note: For those utilizing our LoRa Gateway - 1-Channel (ESP32), the code on lines 288-300 will need to be uncommented. The modification forces the device/node to only use channel 8; instead of randomly picking a channel to broadcast on. This is important as the single channel gateeway only receives transmissions on channel 8 and if the device were broadcasting on channels randomly, only a portion of the transmissions would reach The Things Network.

Once the example code has been modified and uploaded to the SparkFun expLoRaBLE, users can monitor the serial terminal (or SerialMonitor on the Arduino IDE) for successful transmissions. Additionally, users can use The Things Network to decode the data packets to verify the data transmission.

Example of serial output from successful transmissions. (Click to enlarge)

For those looking to test out the range of their setup configuration, The Things Network has an application called TTN Mapper. To get started follow the Mapping Gateway Coverage using a Things Node. There is also an option to map using a either an Android phone or iPhone. For more information on the app, please cheack out the documentation on The Things Network.

To generate the images below, the Android guide was followed. The steps were relatively simple:

The TTN Mapper app uses the phone's positioning and ties it to the data transmission from the linked device. Therefore, users will need to enable their phone's data and location for the application to work properly.

Example mapping of the signal coverage, using a spreading factor of 7 (SF7), for two different antennas.
Note: To maximize the range of the device, the spreading factor should be changed to SF12. However, this modification will reduce the bitrate; and therefore, lowers the data rate; and therefore, minimizes the packet size that can be transmitted.

You can even publish your data online, to get a radar-like coverage map for a gateway: 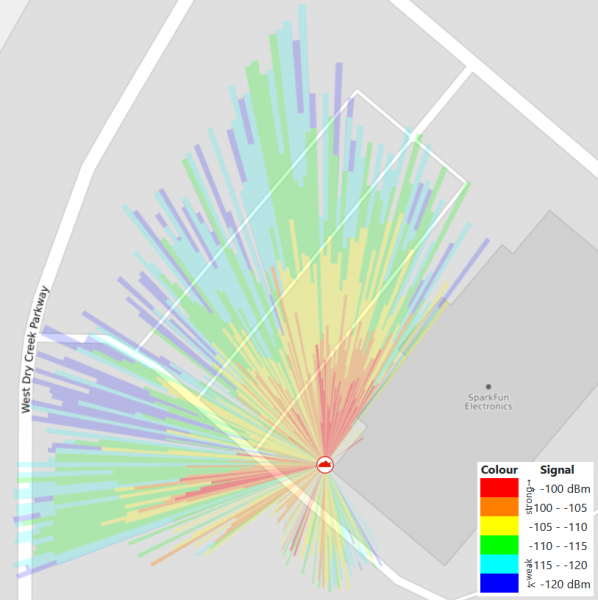 A radar, coverage map for a gateway. (Click to enlarge)

There were some vehicles parked to the northwest and northwest-by-north of where the gateway was positioned; as well as a tree and post to the immediate west and west-by-north. The image illustrates how the signal strength to the west drops off significantly, due to the proximity of the trees and poles. Additionally, how the signal strength in the northwest gradually falls from interference by the vehicles. The signal coverage to the south of the gateway was spotty since it was around the corner of the building.