Simon is an all-time classic game made by Milton Bradley. Kids have been playing this game for years - dating back to 1978. That's pretty impressive! I can't even imagine what kinds of electronics were available in 1978! 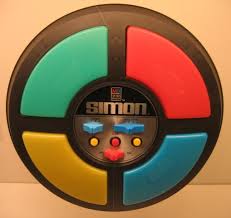 SparkFun created our own version of this game that now runs on the ATmega328 chip (the same microcontroller as the one on the Arduino Uno). This was originally designed as a simple soldering kit, but we quickly realized it had much more potential and could be used to teach programming as well. With a few header pins and an FTDI breakout, you can start reprogramming your Simon in Arduino.

Our basic game runs in a single-player mode. There have been many adaptations to the Simon Code - including a battle-mode that allows two players to challenge each other.

If you haven’t discovered these yet - we have embedded two easter eggs into our code. The first is the Bee Gees Disco Mode. Hold down the Lower-Right button when you turn on the Simon to see this one.

There is also a "Battle-Mode" version that we programmed in as well. Hold the upper right button when you turn on the device. To start the game, the first player should hit a single button. Pass the Simon to your opponent. Your opponent repeats the button press, adds a second button, and then passes it back. Continue by mimicking the pattern and adding a new button for each round. This pattern repeats until someone loses.

Wait! I bought my Simon Says kit a long time ago and it doesn't have this feature? No worries. We're going to show you how to update and modify your code.

Things you'll need to get started: