This section describes the basic parts of the hardware. 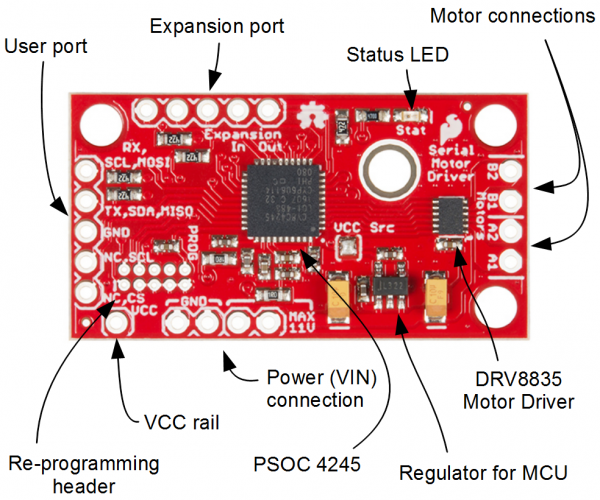 All of the components are populated on the top side of the board.

Power is supplied through the VIN Connection and is regulated down to 3.3V for the PSoC and logic circuits. A VCC rail pin is provided for hackability.

The Status LED has a few things that it displays simultaneously:

The User Port is designated for connection to the user's project (which will tell the motors what to do), and can be configured as UART, SPI, or I2C by jumper setting.

The Expansion Port is configured as I2C master or slave based on jumper settings, and operates on a second I2C bus with only other motor drivers.

The microcontroller generates PWM signals that go straight to the DRV8835 motor driver, which consists of 2 mosfet H-bridge driver circuits with thermal and current protection built in. 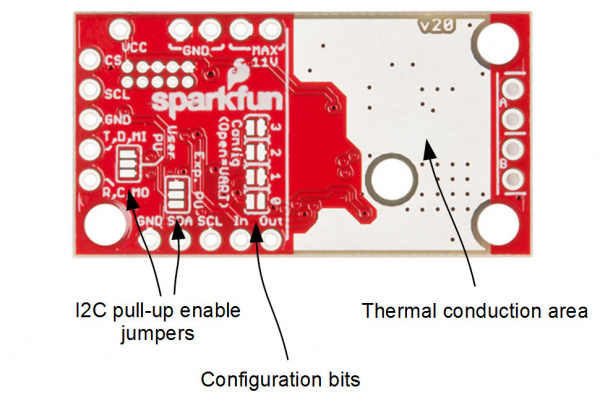 The bottom of the board contains user configuration jumpers and a large area to wick the heat.

Provide 3.3V to 11V to "MAX 11V" and "GND". Each has two through-holes for general use. They can be used to reduce connection resistance or to piggyback other devices, or can accept the leads of a large capacitor. The terminal is directly connected to the DRV8835's power input, and is also regulated down to 3.3V for the PSoC supply and logic levels. The driver can consume up to 3A of current so make sure these wires are short or heavier gauge, or both.

When slaves are attached to the expansion port, they also require power from another source. Wire the "MAX 11V" and "3.3V" pins in parallel with the master as shown in Expansion Port Usage.

The VCC pin is an advanced feature that can be used to operate the SCMD at a different voltage, but isn't used for basic applications. See the SCMD Datasheet for more information.

There are 4 sets of jumpers to configure on this board. There are pull-up enables for both user (User PU) and expansion bus (Exp. PU, default not-pulled up), A VCC disconnect jumper (VCC Src) to remove all logic from the on-board regulator, and 4 config bits that select operational mode.

The configuration is set by encoding a number into the 4 config bits on the bottom of the board. Close a jumper to indicate a 1, or leave it open to indicate a 0. Use this table to see what the user port, address, and expansion port will become in each configuration.

The function of the 0.1" holes are explicitly indicated in this table, and are organized by physical location on the PCB.

The SCMD is designed to operate small robot drive motors without a heatsink, up to about 500mA continuous current. Here's how some regular motors fair when used.

Determining if a heat sink is necessary

The temperature rise is related to the current load on the motor driver. To determine what your load is, attach the motor directly to a power supply and apply torque as will be done by the final application. Then use the chart below to determine if you need to heat sink. You can also stall the motor completely and measure the stall current (or use a multimeter to check the coil resistance, then do the math). 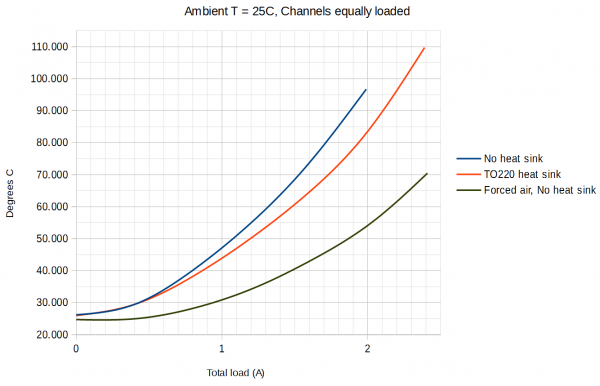 Temperature rise as a function of total driver load

This graph shows total current sourced by the SCMD from both channels. If using bridged mode, find your target current load on the X axis, then see what to expect from these configurations on the Y axis. If not using bridged mode, double the current of a single motor to find the worst case condition of both motors at max current, then use that instead.

The TO-220 Heat Sink and Theragrip Thermal Tape were used to make the above graph, and work well to give yourself an extra amp of capability in a typical application.