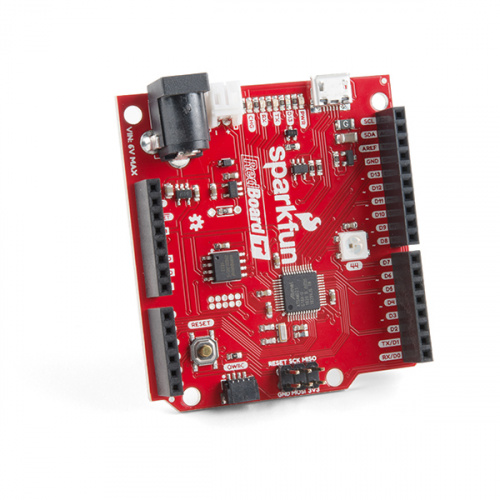 The RedBoard Turbo equips the ATSAMD21G18 with a USB interface for programming and power, a Qwiic connector, an RTC crystal, WS2812-based addressable RGB LED, 600mA 3.3V regulator, LiPo charger, and a variety of other components.

In addition to the RedBoard Turbo, you'll also need a Micro-B Cable (as if you don't already have dozens in your USB cable drawer!). That's all you'll need to get started. You can also take advantage of its LiPo charger with a single-cell Lithium Polymer battery. You may not need everything though depending on what you have. Add it to your cart, read through the guide, and adjust the cart as necessary.

An introduction to the Atmel ATSAMD21G18 microprocessor and our Mini and Pro R3 breakout boards. Level up your Arduino-skills with the powerful ARM Cortex M0+ processor.
Favorited Favorite 6
Share
Use this URL to share: