Once everything is unzipped, you'll simply need to run 'FreedomStudio.exe' to install the application. Upon opening Freedom Studio, we'll want to create a new project from one of our example templates. To do this, go to File > New > Freedom E SDK Software Project. 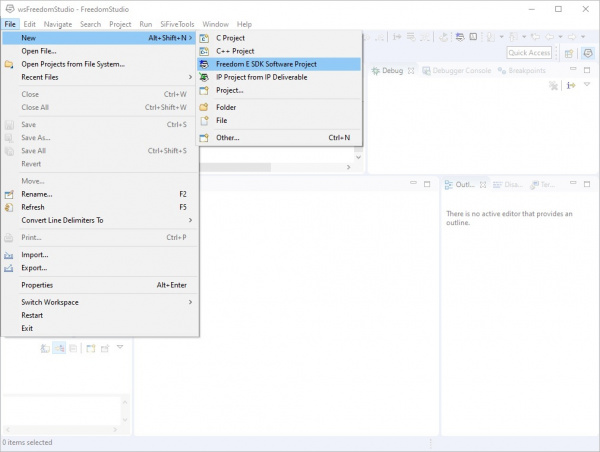 SparkFun's RED-V RedBoard and Thing Plus are very similar to to SiFive's HiFive1 RevB, so we'll be selecting the HiFive1 Rev B (sifive-hifive-revb) as our target board selection. 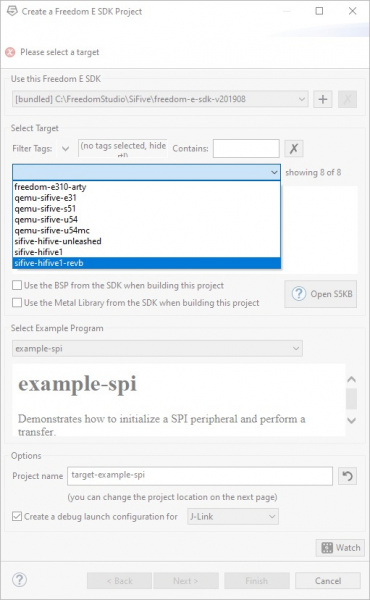 To start, let's keep it simple by flashing the "Hello World" example to our RED-V and see some serial output. 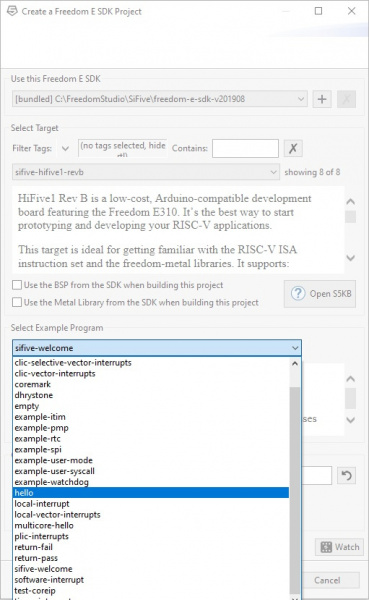 Select hello from the drop down menu. Hit Finish to load the example. You'll need to wait a little as the example project builds. 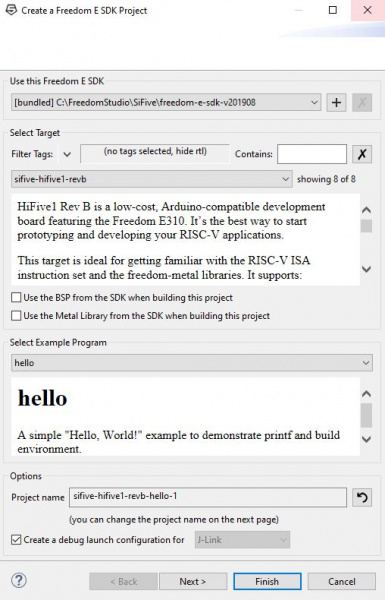 Heads up! Make sure to give the USB-to-JTAG converter some time to enumerate on your computer before uploading the example to your board.

After the sketch builds, a window will open to edit the debug configuration. For now, click on the Close button. Now that the example is built, hit the run button to upload and execute the code on the RED-V. If you have more than one project saved, simply click on the drop down menu next to the run button to select the project to compile and run. 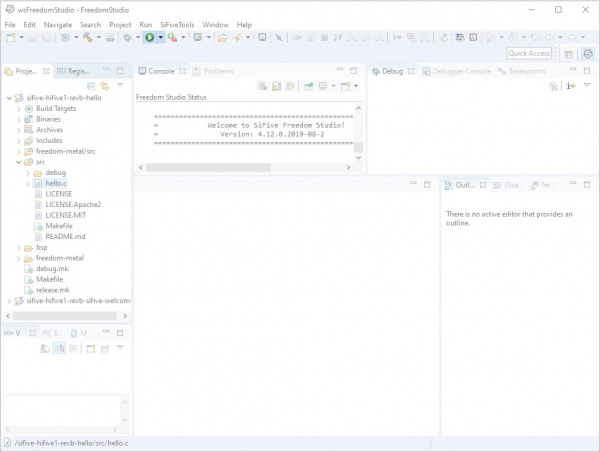 Freedom Studio will then attempt to flash and run the sketch. However, your GDB server might be configured incorrectly to be able to flash code through Freedom Studio. To fix this, go to Run -> Run Configurations... from the menu. 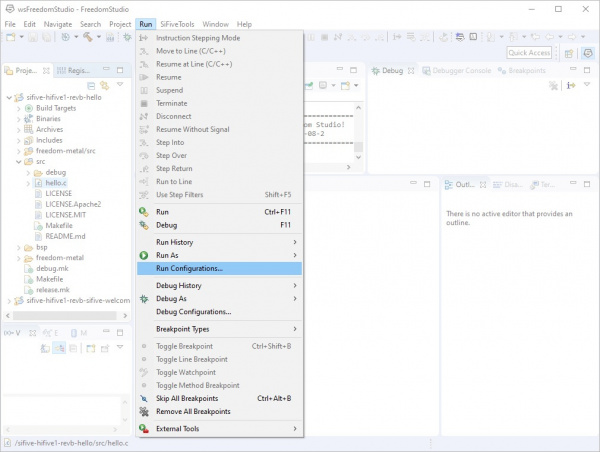 Open the SiFive GDB SEGGER J-Link Debugging tree on the left hand side of the window, select your project, and hit the Run button. This will flash the code over USB and begin running your code as well. 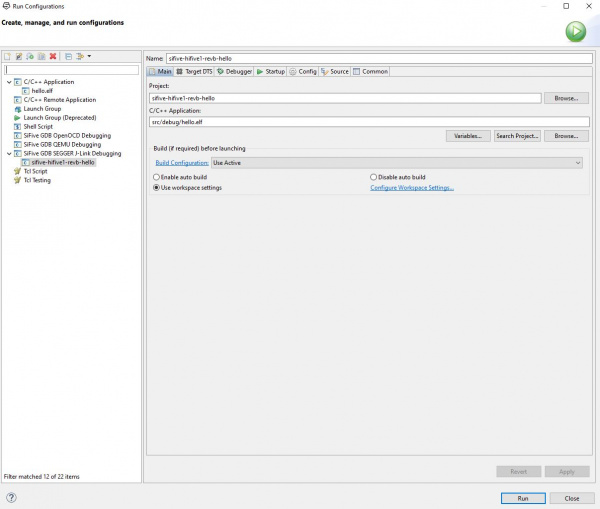 Another way to flash is using the shortcut CTRL+B to build all the files; this will generate a *.hex file in the Project Explorer under src -> debug -> hello.hex . 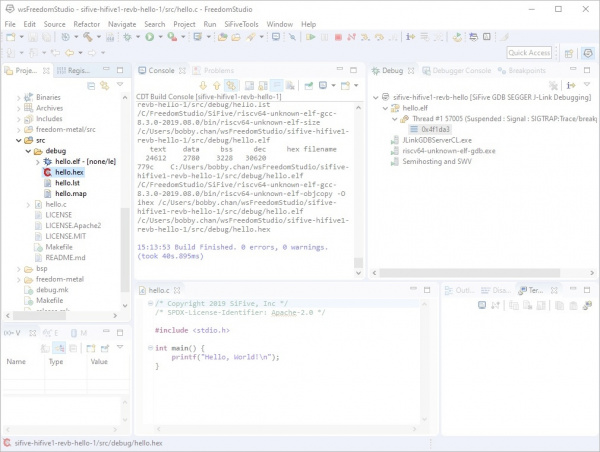 You may have noticed that the RED-V shows up as a flash drive when you plug it into your computer. With the window for the drive opened, drag and drop the *.hex directly onto this drive to program the RED-V.

The program will begin running once the code has been uploaded to the RED-V RedBoard. To see the serial output, you'll need a serial terminal. While you could connect using your favorite serial terminal, we'll use the one built into the Freedom Studio. In the Freedom Studio software, you'll notice a window on the bottom right of the software. Click on the tab labeled as Terminal and then the icon with the monitor. 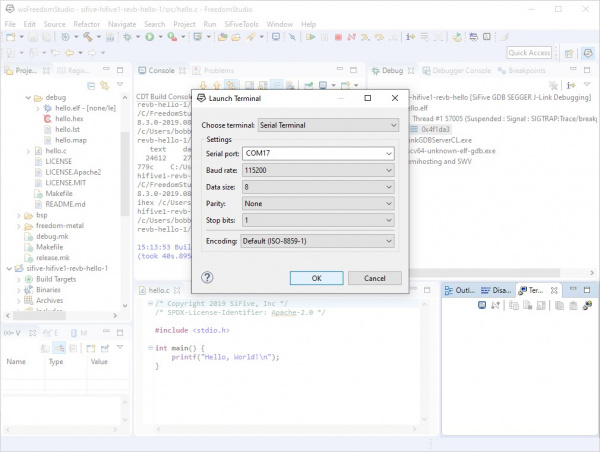 A new window will pop up asking for you to choose your serial terminal and the settings. Click on the Choose terminal: menu and select Serial Terminal. The board will show up as two COM ports on your computer: one for the bootloader and another one for the example program. Most likely the COM port will show up as the one with the second to highest number. The default baud rate of the example projects are set to 115200 baud (8 data bits, no parity, 1 stop bit, default encoding). With the correct settings, hit the OK button to connect. The example code will print "Hello World!" once so we'll need to hit the reset button on the board one time.

You'll some serial output as the RED-V boots up. Once it enters the example program, the RED-V RedBoard will output the familiar message that all programmers know and love: "Hello, World!" 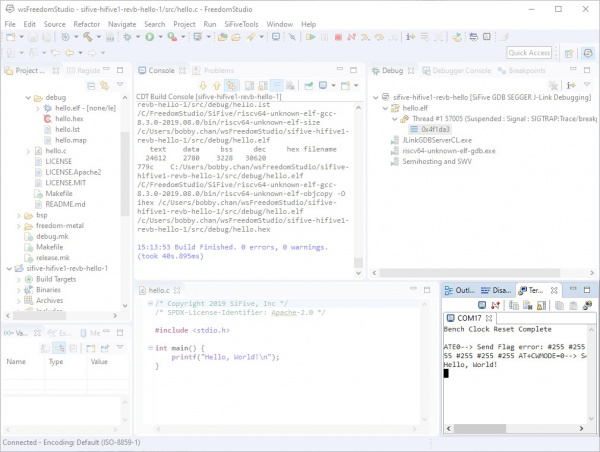 Click on the image for a closer view.
Heads up! If you do not see the output, it's possible that you selected the wrong COM port. Try closing the terminal window and reopening a new session with a different COM port.

Heads up! When defining pins for the RED-V, you'll need to reference the GPIO pin of the FE310 as opposed to the silkscreen on the board. Also, make sure to start the index for the GPIO at 0. In order to properly use a pin as an output, make sure to also follow the sequence to disable and enable the I/O pin in the code.

Now that we have output some serial to a terminal window, let's try to blink the LED on the RED-V. Let's just use the example project that we have open already in Freedom Studio. Copy and paste the example below into the text editor.

When ready, hit the run button to compile and upload. You can also compile and drag the *.hex into the drive.

There'll be an output on the terminal window indicating that we are using the blink code. What we are more interested in is if the LED is turning on and off. Check your board and you should see the built-in LED begin to blink about once a second! Make sure to check out the comments in the example code. Toggling the LED is not as intuitive and straight forward as controlling an LED on an Arduino.