The SparkFun Qwiic SHIM for Raspberry Pi is a small, easily removable breakout to add a Qwiic connector to your Raspberry Pi. The SHIM (short for Shove Hardware in the Middle) design allows you to plug directly to the Pi's I2C bus with no soldering required and the thin PCB design allows for it to be sandwiched on your Pi GPIO with other HATS. The Qwiic SHIM works great when you do not need the full capabilities of the Qwiic pHAT for Raspberry Pi or if you want to add a Qwiic connector to your Pi but do not have room for yet another HAT. 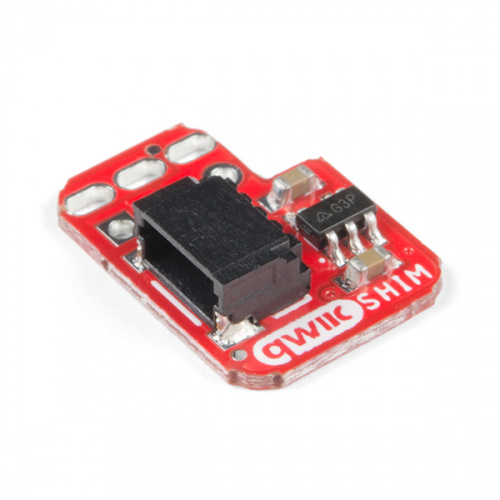 You will need Raspberry Pi with 2x20 male headers installed.

A Pi Zero W will also work but you will need to make sure to solder some male headers to it.

The Raspberry Pi Zero W is still the Pi you know and love, but at a largely reduced size of only 65mm long by 30mm wide and s…

Or you could connect it to any single board computer (like the NVIDIA Jetson Nano) that utilizes the 40-pin Raspberry Pi GPIO header footprint.

Machine learning development board from Google.

Finally, you'll need our handy Qwiic cables to easily connect sensors to your Qwiic SHIM. Below are a few options.

If you are using your Pi (or other single-board computer) as a desktop, these peripherals are required:

If you aren't familiar with the Qwiic system, we recommend reading here for an overview of everything Qwiic:

We would also recommend taking a look at the following tutorials if you aren't familiar with the content covered in them.

An introduction to I2C, one of the main embedded communications protocols in use today.
Favorited Favorite 101

This tutorial will show you how to communicate with your serial devices using a variety of terminal emulator applications.
Favorited Favorite 32

Learn how to setup, configure and use the smallest Raspberry Pi yet, the Raspberry Pi Zero - Wireless.
Favorited Favorite 11

The Qwiic SHIM uses a unique friction-based connector that wedges itself onto the GPIO header for a secure, solderless connection. As you would expect, it has a single Qwiic connector that connects to your Pi's I2C bus (SDA, SCL, 5V and Ground). The SHIM also has a 3.3V regulator so it will work with all Qwiic devices. 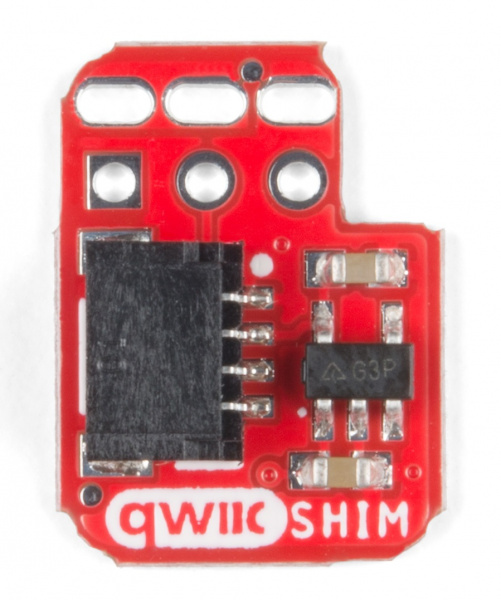 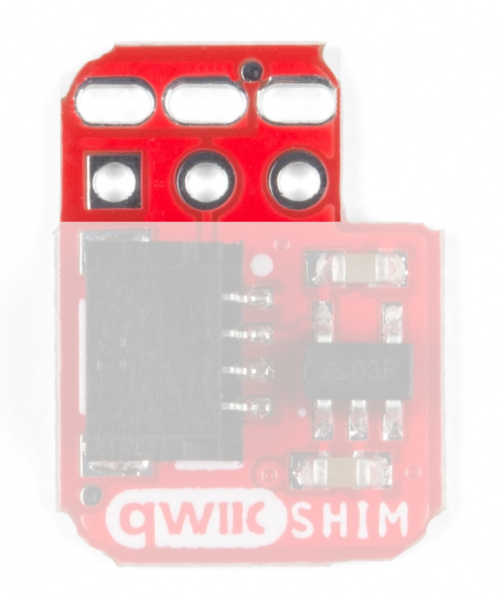 For you savvy readers out there, you may wonder why not just connect directly to the 3.3V rail on the Pi GPIO? A simple answer is the Pi's 5V rail is able to source more current than the 3.3V rail so the regulator allows you to connect more devices to the I2C bus without needing to worry about overtaxing your Pi.The on board AP2112K 3.3V regulator provides a clean 3.3V out for all attached Qwiic devices and can source up to 600mA@3.3V so you should have plenty of available current for your Qwiic project. 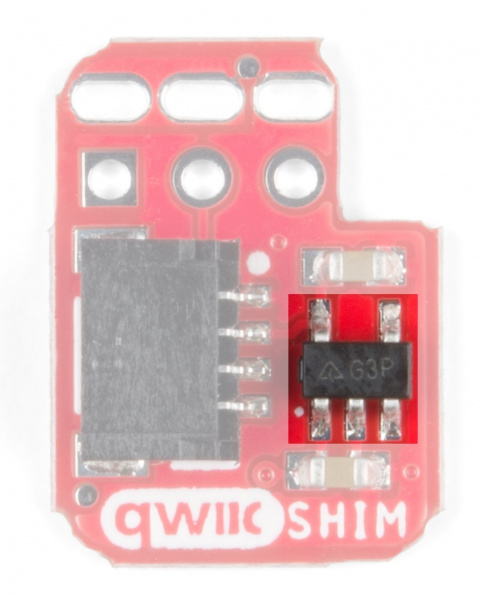 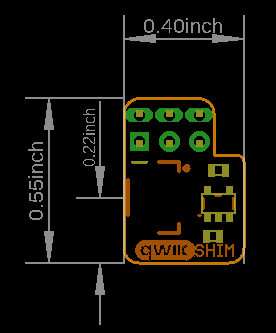 Getting started with the Qwiic SHIM is a snap (well, actually it's more like a push but you get the idea). Making sure to align the Qwiic SHIM's Pin 1 with Pin 1 on your Pi's GPIO header, press the Qwiic SHIM down onto the header. Pin 1 on both the Qwiic SHIM and the Pi GPIO will be marked with a square pin. There is also a beveled corner on the Pi GPIO header indicating Pin 1 from the top of your Pi. That's it! With the SHIM in place you can now attach all your Qwiic devices to your Pi with space to spare for other Pi HATs.

⚡ Warning! When connecting the Qwiic SHIM to your GPIO header, make sure to align it properly with Pin 1. If the Qwiic SHIM is not aligned properly (either if it is upside down or not aligned on the correct pins) you can short your 5V rail to Ground! 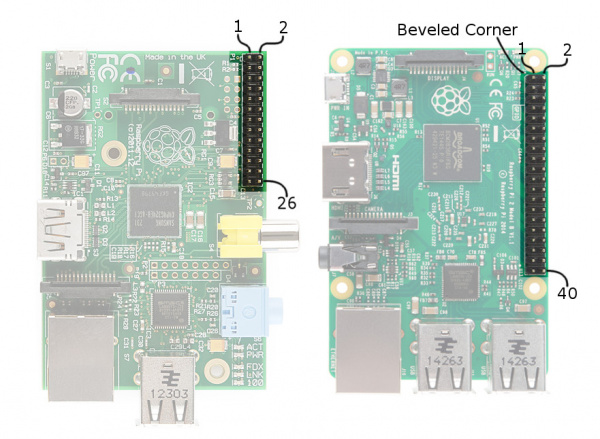 With your Qwiic SHIM mounted on your Pi it should look like this:

With the Qwiic SHIM in place, you can now stack all the HATs you would like on top. With a HAT on top of the SHIM, the press fit header will make an even better connection and the thin PCB allows any HAT to still connect fully to the GPIO header. 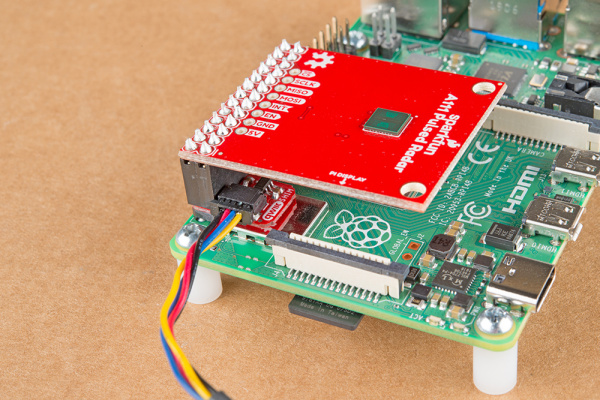 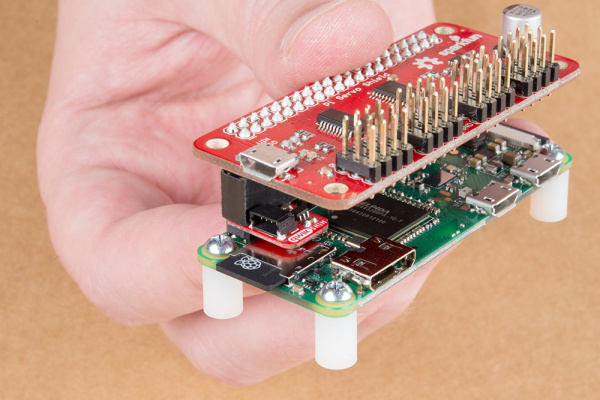 And here you can see it shoved in the middle with the SparkFun Pi Servo HAT.
Note: The Qwiic SHIM can also be connected in the same way with single board computers (like the NVIDIA Jetson Nano or the Google Coral) that utilize the 40-pin Raspberry Pi header footprint. Just remember to make sure you are aligning it properly!

Setting up I2C on Raspberry Pi

If you're starting from scratch, with a blank microSD card, you'll want to install Raspbian. If you've already got a working Raspbian system, skip ahead to step 3.

Be patient -- each of these steps takes a while.

Once you've got wiringPi installed, run the gpio commands shown below.

It should respond with some information about the wiringPi version and the Pi that its running on, then draw a table illustrating the configuration for the pins in the 40-pin connector.

Like the SPI peripheral, I2C is not turned on by default. Again, we can use raspi-config to enable it.

Once you return to terminal, enter this command:

The Pi should respond with:

Which represents the user-mode I2C interface.

There is a set of command-line utility programs that can help get an I2C interface working. You can get them with the apt package manager.

In particular, the i2cdetect program will probe all the addresses on a bus, and report whether any devices are present. Call i2cdetect -y 1 to probe the first I2C bus, which is what the Qwiic SHIM is connected to.

This map indicates that there is a peripheral at address 0x60. We can read and write its registers using the i2cget, i2cset and i2cdump commands.

Now that you have I2C set up on your Pi, you can start programming your Qwiic devices on your Pi or if you'd like to start with some examples, we have a host of Python drivers for Qwiic breakouts available in the GitHub repository linked below. You can read more about Python for the SparkFun Qwiic system in this blog post.

Now that you have your Qwiic SHIM ready to go, it's time to check out some of Qwiic enabled products.

The XBee3 Thing Plus is an ultra-capable and easy way for getting into wireless device development.

Check out this related tutorial:

Learn how to use serial I2C and SPI buses on your Raspberry Pi using the wiringPi I/O library for C/C++ and spidev/smbus for Python.
Favorited Favorite 18
Share
Use this URL to share: