There is a power status LED to help make sure that your Qwiic ADC is getting power. You can power the board either through the polarized Qwiic connector system or the breakout pins (3.3V and GND) provided. This Qwiic system is meant to use 3.3V, be sure that you are NOT using another voltage when using the Qwiic system. 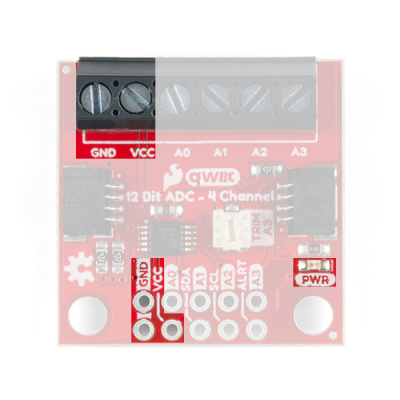 Annotated image of power LED along with VCC and GND connections.

(*If you want to remove the power LED to conserve power, you will need to de-solder or hotair rework the LED.)

Caution: The analog input voltage range is (GND - .3V) to (VDD + .3V); anything slightly higher or lower and you will damage the ADC chip. If you are using the Qwiic system, this is approximately -.3V to 3.6V in reference to the GND pin. If the voltages on the input pins can potentially violate these conditions, use external Schottky diodes and series resistors to limit the input current to safe values (as mentioned in the datasheet).

There are four input measurement channels for the ADS1015, labeled AIN0-3, accessible through the screw pin terminals shown below. With the Qwiic system, the absolute minimum and maximum voltage for these inputs is -.3V and 3.6V, respectively. 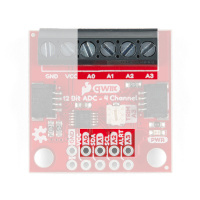 Annotated image of input connections on board.
Click to enlarge. 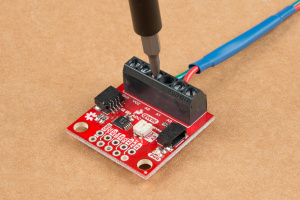 Example of attaching inputs through screw terminals. Click to enlarge.

Depending on the settings for the multiplexer (MUX) in the ADS1015, the analog voltage readings (or conversions on the ADC) will be either for 4 single-ended inputs or 2 differential pairs.

Note: For high accuracy measurements, input impedance should be taken into consideration. Additionally, any noise from the power supply to the ADC will be passed on to the output measurements.

In addition, there is an onboard 10kΩ potentiometer, attached to AIN3 that is used in the examples and can be used for testing. The potentiometer is connected directly to 3.3V and GND so the voltage range will always be defined by the power input to the board. 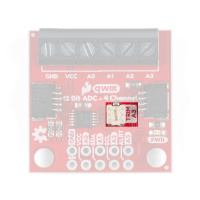 Annotated image of potentiometer on board.
Click to enlarge. 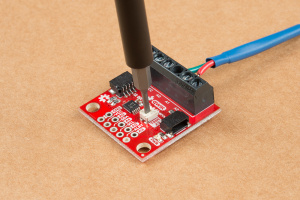 For the potentiometer, we recommend using 1.5mm flathead precision screwdriver. Click to enlarge.
When using AIN3 as the negative/reference input be sure to cut the jumper to remove the potentiometer for accurate differential readings (see Jumper section below).

The ADS1015 ADC is a low-power 12-bit analog-to-digital converter (ADC), which includes a built-in integrated voltage reference and oscillator. At the core of its operation, the ADC uses a switched-capactior input stage and a delta-sigma (ΔΣ) modulator to determine the differential between AINP (positive analog input) and AINN (negative analog input). Once the conversion is completed, the digital output is accessible over the I2C bus from the internal conversion register. 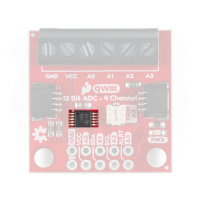 Annotated image of ADS1015 on board. Click to enlarge. 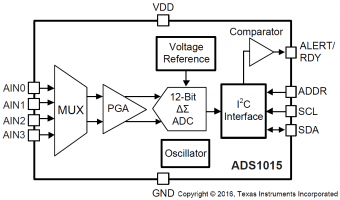 Note: The ADS1015 has an integrated voltage reference; an external reference voltage cannot be used.

The ADS1015 is a powerful tool with multiple configuration settings, set by the Config Register, for the analog voltage readings (or conversions). In the following sections, we will cover the general operation of the ADS1015. For exact details of the various configuration settings, please refer to the manufacturer datasheet. The operational characteristics of the ADS1015 are summarized in the table below.

Caution: The absolute, analog input voltage range is (GND - .3V) to (VDD + .3V); anything slightly higher/lower may damage the ADC chip. If the voltages on the input pins can potentially violate these conditions, as specified by the datasheet, use external Schottky diodes and series resistors to limit the input current to safe values.

The ADS1015 has 2 different conversion modes: single-shot and continuous-conversion with the ability to support duty cycling. Through these modes, the ADS1015 is able to optimize its performance between low power consumption and high data rates.

By default, the ADS1015 operates in single-shot mode. In single-shot mode, the ADC only powers up for ~25μs to convert and store the analog voltage measurement in the conversion register before powering down. The ADS1015 only powers up again for data retrieval. The power consumption in this configuration is the lowest, but it is dependent on the frequency at which data is converted and read.

In this mode, the ADS1015 continuously performs conversions on analog voltage measurements and places the data in the conversion register. If the configuration settings are changed in the middle of the conversion process, the settings take effect once the current process is completed.

There are four input measurement channels for the ADS1015, labeled AIN0-3. The input multiplexer controls which of those channels operates as the AINP (positive analog input) and AINN (negative analog input) to the ADC. Depending on the input MUX configuration, the voltage measurements will be either on single-ended inputs or as differential pairs. 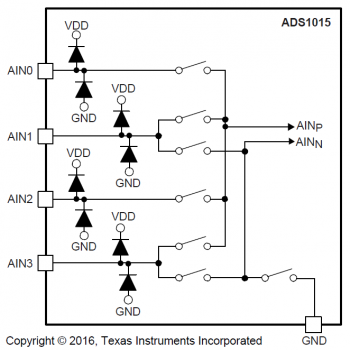 Operational digram of multiplexer from datasheet.

A programmable gain amplifier (PGA) is implemented before the ΔΣ ADC. The ADS1015 has 6 programmable gain settings, which are expressed in the full-scale range (FSR) of the ADC scaling. The maximum analog measurement is then defined by the smaller of the FSR or VDD. By default, the ADS1015 has a resolution of 1mV by using an FSR of ±2.048V as highlighted in bold in the table below.

Although, it is listed as a 12-bit ADC, the ADS1015 operates as an 11-bit ADC when used with single-ended (individual) inputs. The 12th bit only comes into play in differential mode, as a sign (+ or -) indicator for the digital output. This allows the digital output to represent the full positive and negative range of the FSR (see table and figure below). 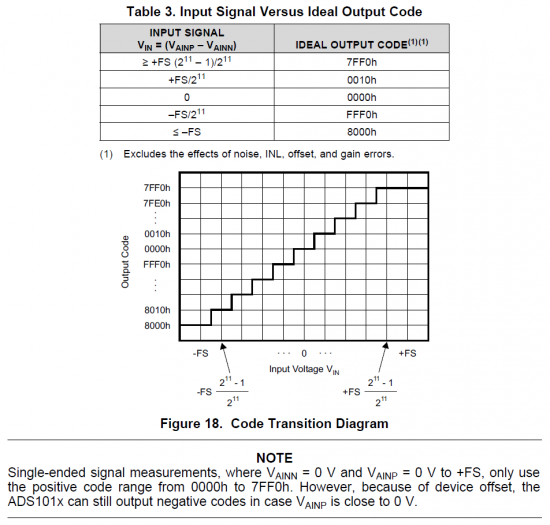 Explanation of how data output and sign bit work from datasheet.

Since the ADS1015 only uses an internal reference voltage, the FSR is to be defined by the design of the 12-bit ADC:

Due to the configuration options, it is difficult to make full use of the full-scale range of the ADS1015 with common (useful) voltages. See the examples below for a more detailed explanation:

The range of the input voltage that can be read by the ADC is limited by FSR. Any voltage higher than the FSR (but less than VDD) reads the same maximum value in the digital output because the FSR is maxed out. In this case, you are maximizing the resolution (use of the data output), but not the full, allowable range of analog input (0-3.3V).

The data range is limited by VDD, any higher input voltage will continue to have data up to the electrical specifications of the ADS1015 ~VDD + 0.3V, where the IC gets damaged. In this case, the input voltage is being maximized to the electrical specification (0-3.3V). However, this means you are effectively only using 80% of the full resolution of the ADC (i.e. a 10.8-bit ADC at 3.3V).

The ADS1015 features a programmable digital comparator that can trigger the ALERT/RDY pin to indicate when conversion data is ready. By default, the comparator is disabled. However, when activated, the comparator operates in either a traditional or window mode. The upper and lower thresholds for the comparator are set by the last two registers on the ADS1015; while, the polarity (active low/high), latching or non-latching, operational mode, and enabling of the ALERT/RDY pin are set in the Config register.

The ADS1015 has 4 available I2C addresses, which are set by the address pin, ADDR. On the Qwiic ADC, the default slave address of the ADS1015 is 0x48 (HEX) of 7-bit addressing, following I2C protocol. The ADS1015 does have an additional general call address that can be used to reset all internal registers and power down the ADS1015 (see datasheet).

The simplest way to use the Qwiic ADC is through the Qwiic connect system. The connectors are polarized for the I2C connection and power. (*They are tied to their corresponding breakout pins.) 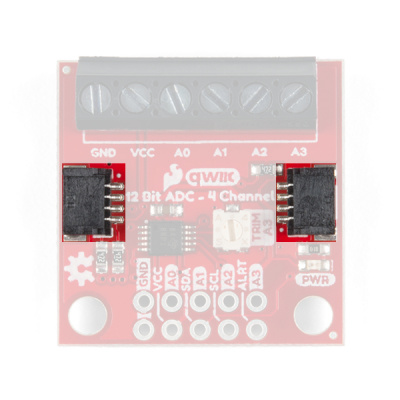 Annotated image of the Qwiic connectors.

However, the board also provides five labeled breakout pins. You can connect these lines to the I2C bus of your microcontroller and power pins (3.3V and GND), if it doesn't have a Qwiic connector. The ALERT/RDY pin is broken out to use for triggered events (requires pull-up resistor). 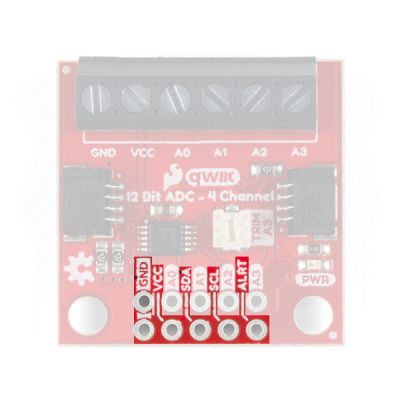 Annotated image of the breakout pins.

Caution: Be careful when cutting traces, as not to unintentionally cut other traces.

There are jumpers on the board allowing the user to select between different I2C addresses, to remove the pull up resistors from the I2C pins, and to disconnect the potentiometer on AIN3. Not sure how to modify a jumper? Read here!

Note: Make sure this jumper is only shorted on one of the four available pads. There is a pullup jumper on the 3.3V pad, but to help prevent a shorts if multiple pads are accidentally bridged.

The address selection pin, by default is tied to GND on the PCB. Cutting the trace and bridging the I2C address jumper to another pad changes the slave address from I2C Jumper Default: 0x48. The location of the jumpers is shown in the image below. 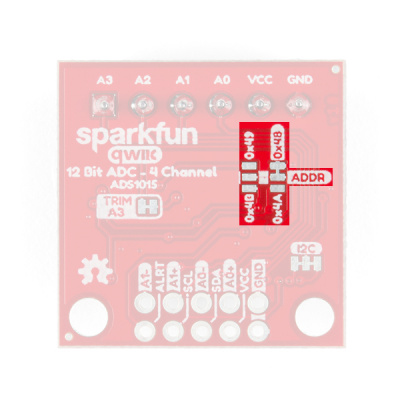 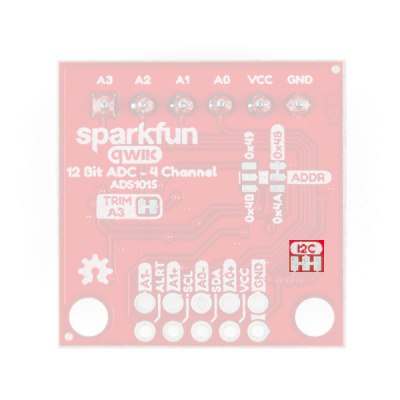 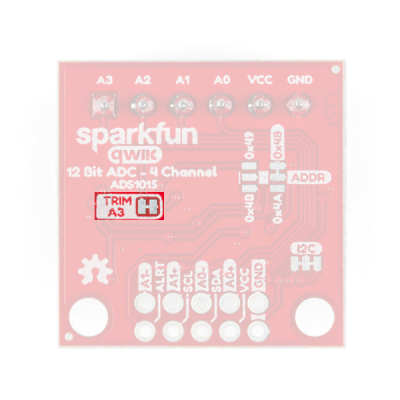