Do you need more control over your AVRs? Whether it's an ATmega328, ATmega32U4, ATtiny85, if it's an AVR there's a good chance the AVR Pocket Programmer can program it. 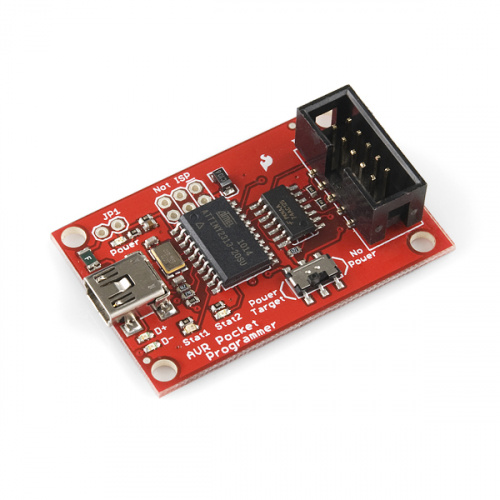 This new version uses an SMD 5x2 header. This is a simple to use USB AVR programmer. It is low cost, easy to use, works great…

In this tutorial we will introduce you to all of the important aspects of the AVR Pocket Programmer. It's split into a series of sections, which cover:

Most importantly, to follow along with this tutorial, you will need an AVR Pocket Programmer and an AVR to program. On top of that, a mini-B USB cable is required to connect the Programmer to your computer. 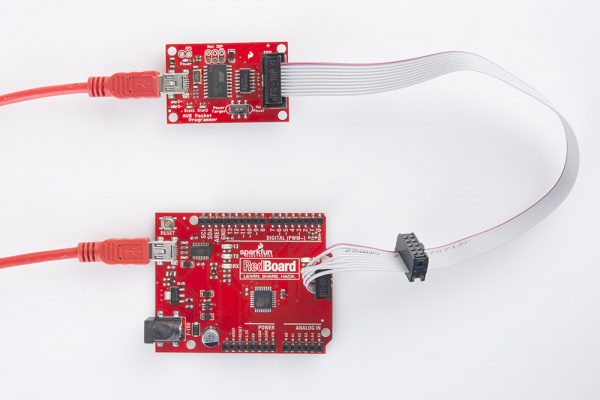 That microcontroller-to-be-programmed can be any AVR with 64K or less of flash. The ATmega328 on an Arduino Uno or RedBoard works perfectly, but the ATmega2560 of an Arduino Mega does not.

Beyond that, you may need something to interface the Programmer to your AVR. Here are some useful accessories, which might make the job easier:

This is a row of 40 break away headers spaced 0.1" apart with long pins on both sides. This header is especially useful when …

This is a simple 2x3 male PTH header. This header is in the common configuration for an ISP connector. Each pin has a spacing…

$0.50
Favorited Favorite 4
Wish List
Note: If your AVR is living on a breadboard, you probably don't have an interface to the standard 2x3 ISP pinout. Our old simple breakout board made interfacing the programmer with your breadboarded circuit possible. We recommend using the ISP Pogo Adapter linked above now that the breakout board has been retired in the catalog.

Whether you're a beginner or experienced electronics enthusiast, the Pocket Programmer should be easy to get up-and-running. If you've programmed an Arduino before, you'll be well-prepared for the next step. Here are some tutorials we'd recommend reading before continuing on with this one: