The micro:bit, by itself, offers a vast array of possibilities and potential projects, considering it includes an onboard temperature sensor, accelerometer, compass, LED array, Bluetooth radio, and more. However, when you're ready to branch out beyond those initial capabilities, like connecting to an SD card for logging, you'll need to break out some of the pins on the micro:bit's card edge connector. For that, we've got you covered with the micro:bit Breakout Board. 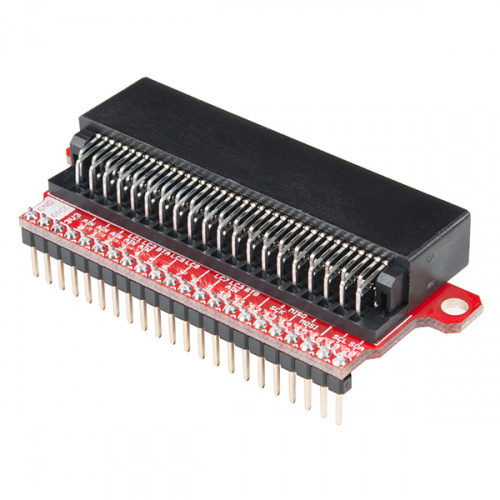 There's also a version without headers, if you care to solder your own or use wires instead.

If you have not yet used the micro:bit, check out this guide first.

Welcome to the wonderful world of breadboards. Here we will learn what a breadboard is and how to use one to build your very first circuit.
Favorited Favorite 57

A tutorial on all things resistors. What is a resistor, how do they behave in parallel/series, decoding the resistor color codes, and resistor applications.
Favorited Favorite 44

Learn the basics about LEDs as well as some more advanced topics to help you calculate requirements for projects containing many LEDs.
Favorited Favorite 52

The micro:bit Breakout board allows you to utilize all of the pins on the micro:bit and opens up some previously inaccessible communication ports, like I2C and SPI.

Top-down diagram of the micro:bit breakout board

Most of the micro:bit's pins can be configured for one or more functions.

The pin listed as 3V3 can be used as an input (regulated 3.3V, do not exceed 3.6V!) or an output if you plug a battery pack or USB into the micro:bit.

The pins labeled with LCn (e.g. LC1, LC8) refer to pins that are used to control the LED array on the front of the micro:bit. You can use them as GPIO, but you'll often get weird patterns to show up on the LEDs, or when you write to the LED array, you may see unexpected behavior. If you use them as GPIO, we recommend disabling the LED display.

If you have the version of the breakout board without headers, solder some breakaway headers to the board. You can also solder wire directly to the breakout. 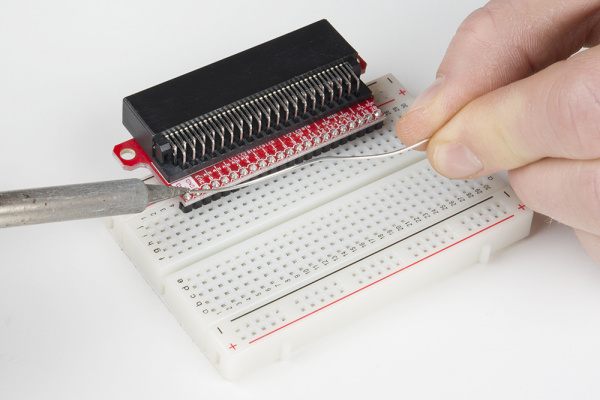 Note: The micro:bit must be facing up in order to make electrical connections to the pins.

Remember, LEDs are polarized parts and can only work properly in one orientation. The longest leg of the LED goes where the black GND wire is in the circuit. 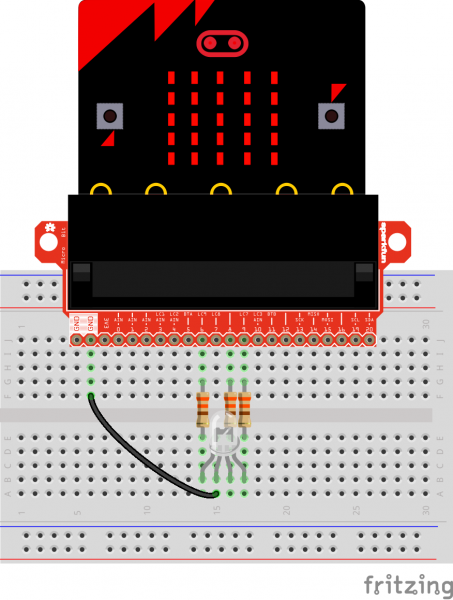 You can download the code from the emulator, or check out the project's page here:

Copy the .hex file to your micro:bit drive, and you should see a fancy array of colors appear on your LED!

With the micro:bit breakout board, you can start introducing more sensors, lights, and motors into your project! For more information, check out these resources:

Learn how to connect the RedBot Line-Following Sensor Bar to an Arduino-type microcontroller. Use the example sketches to read data from the bar, and try out a simple line-following algorithm.
Favorited Favorite 3

Getting started with the Pyboard using MicroPython.
Favorited Favorite 1

In this tutorial, we will learn about how to create an interactive theatrical prop for a performance by 3D printing a translucent diamond prop using a non-addressable RGB LED strip and AT42QT1011 capacitive touch sensing.
Favorited Favorite 2

The TFMini is a ToF (Time of Flight) LiDAR sensor capable of measuring the distance to an object as close as 30 cm and as far as 12 meters! The TFMini allows you to easily integrate LiDAR into applications traditionally reserved for smaller sensors such as the SHARP GP-series infrared rangefinders. With the added Qwiic feature, you can quickly connect to the sensor via I2C!
Favorited Favorite 3
Share
Use this URL to share: