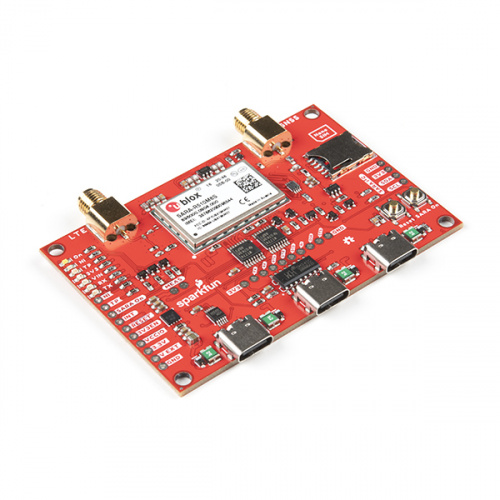 The u-blox SARA-R510M8S module is a secure cloud LTE Cat M1, LTE Cat NB2 solution based on u-blox's UBX-R5 cellular chipset with an integrated u-blox M8 GNSS receiver chip and separate GNSS antenna interface. This breakout routes all of the functional pins on the R510M8S module to user interfaces (USB or plated-through hole) so you can take full advantage of all of the features available on this impressive LTE/GNSS module.

The SARA-R5's UART interface can be configured into one of five variants, providing connectivity over one or two UARTs. A separate USB port provides access to the SARA's trace log for diagnostic purposes. This breakout provides access to all three serial interfaces (UART1, UART2 and SARA Diag) via separate USB-C connections. All eight 3.3V serial signals are available on a 0.1"-pitch breakout header.

The breakout ships with a Hologram SIM card. If you prefer to use your own SIM card, please check that your chosen service provider offers LTE-M / NB-IoT coverage for your area before purchasing.

In order to follow along with this tutorial you'll need the following items to use with the LTE GNSS Breakout - SARA-R5.

The primary interface for this breakout is over USB-C so you'll need at least one USB-C cable:

These 0.8m cables have minor modifications that allow them to be be plugged into their ports regardless of orientation on the…

For those who prefer to use the LTE GNSS Breakout with our u-blox SARA-R5 Arduino Library, you'll need an Arduino development board:

With a 32-bit ARM Cortex-M4F MCU, the SparkFun SAMD51 Thing Plus is one of our most powerful microcontroller boards yet!

$19.95
8
Favorited Favorite 25
Wish List
Note: The LTE GNSS Breakout runs at 3.3V logic and requires some hardware modifications to work with an Arduino and the u-blox SARA-R5 Library. Read on to the Hardware Assembly section for detailed instructions.

The breakout requires a pair of antennas, one for the LTE module and another for the GNSS receiver. The options below work with the LTE GNSS Breakout:

This exceptional GPS/GNSS antenna is designed for both GPS and GLONASS reception.

If you aren't familiar with the following concepts you may want to check out these tutorials before continuing.

Learn the difference between 3.3V and 5V devices and logic levels.
Favorited Favorite 76
Share
Use this URL to share: