How to Use Them

So you've come to the sensible conclusion that you need to put LEDs on everything. We thought you'd come around.

Let's go over the rule book:

In electronics, polarity indicates whether a circuit component is symmetric or not. LEDs, being diodes, will only allow current to flow in one direction. And when there's no current-flow, there's no light. Luckily, this also means that you can't break an LED by plugging it in backwards. Rather, it just won't work. 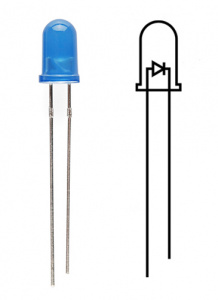 The positive side of the LED is called the "anode" and is marked by having a longer "lead," or leg. The other, negative side of the LED is called the "cathode." Current flows from the anode to the cathode and never the opposite direction. A reversed LED can keep an entire circuit from operating properly by blocking current flow. So don't freak out if adding an LED breaks your circuit. Try flipping it around.

The brightness of an LED is directly dependent on how much current it draws. That means two things. The first being that super bright LEDs drain batteries more quickly, because the extra brightness comes from the extra power being used. The second is that you can control the brightness of an LED by controlling the amount of current through it. But, setting the mood isn't the only reason to cut back your current.

3) There is Such a Thing as Too Much Power

If you connect an LED directly to a current source it will try to dissipate as much power as it's allowed to draw, and, like the tragic heroes of olde, it will destroy itself. That's why it's important to limit the amount of current flowing across the LED.

For this, we employ resistors. Resistors limit the flow of electrons in the circuit and protect the LED from trying to draw too much current. Don't worry, it only takes a little basic math to determine the best resistor value to use. You can find out all about it in the example applications of our resistor tutorial!

A tutorial on all things resistors. What is a resistor, how do they behave in parallel/series, decoding the resistor color codes, and resistor applications.
Favorited Favorite 50

Don't let all of this math scare you, it's actually pretty hard to mess things up too badly. In the next section, we'll go over how to make an LED circuit without getting your calculator.