To figure out why one might want to communicate over I2C, you must first compare it to the other available options to see how it differs.

Because serial ports are asynchronous (no clock data is transmitted), devices using them must agree ahead of time on a data rate. The two devices must also have clocks that are close to the same rate, and will remain so--excessive differences between clock rates on either end will cause garbled data.

Asynchronous serial ports require hardware overhead--the UART at either end is relatively complex and difficult to accurately implement in software if necessary. At least one start and stop bit is a part of each frame of data, meaning that 10 bits of transmission time are required for each 8 bits of data sent, which eats into the data rate.

Another core fault in asynchronous serial ports is that they are inherently suited to communications between two, and only two, devices. While it is possible to connect multiple devices to a single serial port, bus contention (where two devices attempt to drive the same line at the same time) is always an issue and must be dealt with carefully to prevent damage to the devices in question, usually through external hardware.

Finally, data rate is an issue. While there is no theoretical limit to asynchronous serial communications, most UART devices only support a certain set of fixed baud rates, and the highest of these is usually around 230400 bits per second. 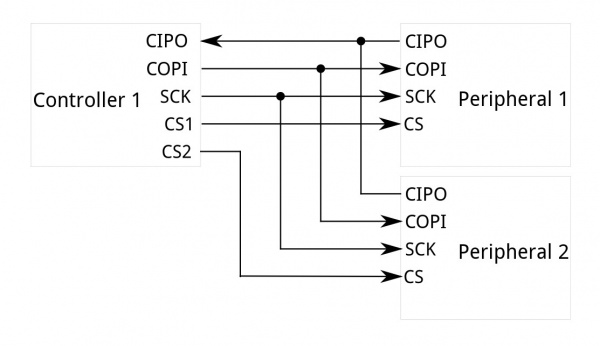 The most obvious drawback of SPI is the number of pins required. Connecting a single controller [1] to a single peripheral [1] with an SPI bus requires four lines; each additional peripheral device requires one additional chip select I/O pin on the controller. The rapid proliferation of pin connections makes it undesirable in situations where lots of devices must be connected to one controller. Also, the large number of connections for each device can make routing signals more difficult in tight PCB layout situations.

SPI only allows one controller on the bus, but it does support an arbitrary number of peripherals (subject only to the drive capability of the devices connected to the bus and the number of chip select pins available).

SPI is good for high data rate full-duplex (simultaneous sending and receiving of data) connections, supporting clock rates upwards of 10MHz (and thus, 10 million bits per second) for some devices, and the speed scales nicely. The hardware at either end is usually a very simple shift register, allowing easy implementation in software.

Enter I2C - The Best of Both Worlds! 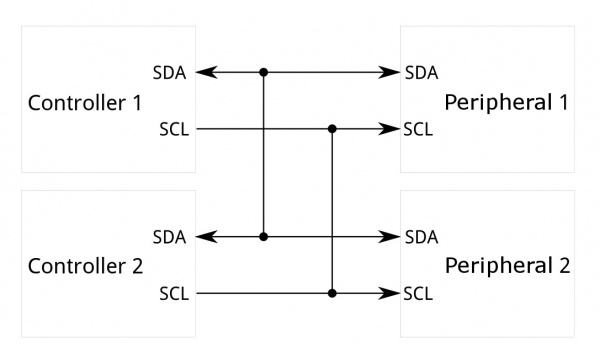 I2C requires a mere two wires, like asynchronous serial, but those two wires can support up to 1008 peripheral devices. Also, unlike SPI, I2C can support a multi-controller system, allowing more than one controller [1] to communicate with all peripheral [1] devices on the bus (although the controller devices can't talk to each other over the bus and must take turns using the bus lines).

Data rates fall between asynchronous serial and SPI; most I2C devices can communicate at 100kHz or 400kHz. There is some overhead with I2C; for every 8 bits of data to be sent, one extra bit of meta data (the "ACK/NACK" bit, which we'll discuss later) must be transmitted.

The hardware required to implement I2C is more complex than SPI, but less than asynchronous serial. It can be fairly trivially implemented in software.

[1] Note: You may be familiar with the terms "master" and "slave" to represent the relationship between devices on an I2C bus. The terms are considered obsolete and are now replaced with the terms "controller" and "peripheral," respectively.

The naming convention may vary depending on manufacturer, programming language, companies, or organizations (e.g. main/secondary, initiator-responder, source/replica, etc.). For more information, check out the following links.