Communication via I2C is more complex than with a UART or SPI solution. The signalling must adhere to a certain protocol for the devices on the bus to recognize it as valid I2C communications. Fortunately, most devices take care of all the fiddly details for you, allowing you to concentrate on the data you wish to exchange.

Messages are broken up into two types of frame: an address frame, where the controller indicates the peripheral to which the message is being sent, and one or more data frames, which are 8-bit data messages passed from controller to peripheral or vice versa. Data is placed on the SDA line after SCL goes low, and is sampled after the SCL line goes high. The time between clock edge and data read/write is defined by the devices on the bus and will vary from chip to chip.

To initiate the address frame, the controller device leaves SCL high and pulls SDA low. This puts all peripheral devices on notice that a transmission is about to start. If two controllers wish to take ownership of the bus at one time, whichever device pulls SDA low first wins the race and gains control of the bus. It is possible to issue repeated starts, initiating a new communication sequence without relinquishing control of the bus to other controller(s); we'll talk about that later.

The address frame is always first in any new communication sequence. For a 7-bit address, the address is clocked out most significant bit (MSB) first, followed by a R/W bit indicating whether this is a read (1) or write (0) operation.

After the address frame has been sent, data can begin being transmitted. The controller will simply continue generating clock pulses at a regular interval, and the data will be placed on SDA by either the controller or the peripheral, depending on whether the R/W bit indicated a read or write operation. The number of data frames is arbitrary, and most peripheral devices will auto-increment the internal register, meaning that subsequent reads or writes will come from the next register in line.

Once all the data frames have been sent, the controller will generate a stop condition. Stop conditions are defined by a 0->1 (low to high) transition on SDA after a 0->1 transition on SCL, with SCL remaining high. During normal data writing operation, the value on SDA should not change when SCL is high, to avoid false stop conditions.

As with a normal 7-bit transfer, another transfer begins immediately, and this transfer contains bits 7:0 of the address. At this point, the addressed peripheral should respond with an ACK bit. If it doesn't, the failure mode is the same as a 7-bit system.

Sometimes, it is important that a controller be allowed to exchange several messages in one go, without allowing other controllers on the bus to interfere. For this reason, the repeated start condition has been defined. 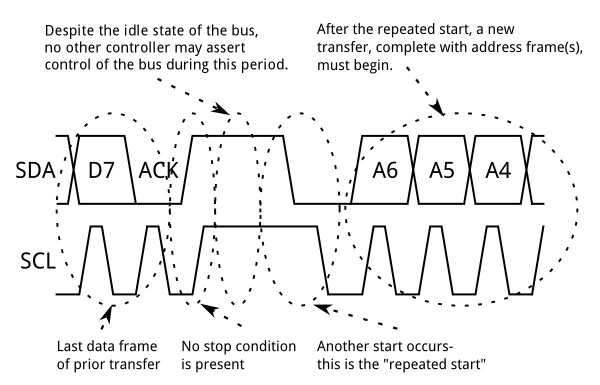 At this point, the next message can begin transmission. The syntax of this new message is the same as any other message--an address frame followed by data frames. Any number of repeated starts is allowed, and the controller will maintain control of the bus until it issues a stop condition.

At times, the controller's data rate will exceed the peripheral's ability to provide that data. This can be because the data isn't ready yet (for instance, the peripheral hasn't completed an analog-to-digital conversion yet) or because a previous operation hasn't yet completed (say, an EEPROM which hasn't completed writing to non-volatile memory yet and needs to finish that before it can service other requests). 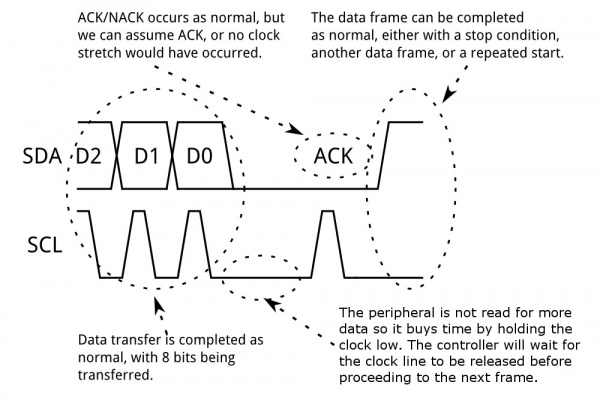 Tip: If you are looking for examples that use clock stretching, try looking at the CCS811 used with Arduino and Python for ideas! The library and examples in the following tutorials adjust the clock signal for the device.

This tutorial shows you how to get data from a CCS811 breakout board with the I2C interface.
Favorited Favorite 4