In Circuit 2, you got to use a potentiometer, which varies resistance based on the twisting of a knob. In this circuit, you’ll be using a photoresistor, which changes resistance based on how much light the sensor receives. Since the Galileo can’t directly interpret resistance (rather, it reads voltage), we need to use a voltage divider to use our photoresistor. This voltage divider will output a high voltage when it is getting a lot of light and a low voltage when little or no light is present.

Ready to start hooking everything up? Check out the Fritzing diagram below, to see how everything is connected. Pay special attention to the component’s markings indicating how to place it on the breadboard. Polarized components can only be connected to a circuit in one direction. 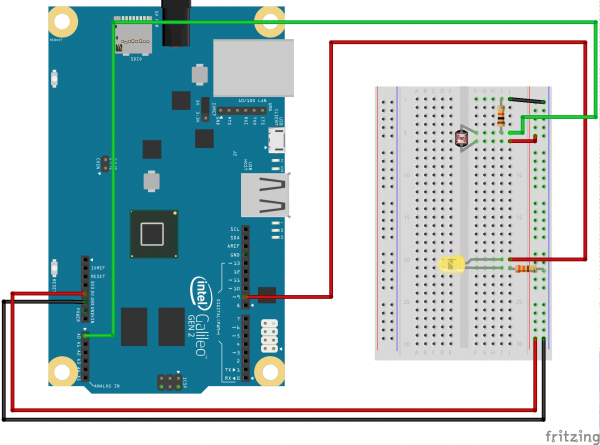 value: the number to map

fromLow: the lower bound of the value's current range

fromHigh: the upper bound of the value's current range

toLow: the lower bound of the value's target range

toHigh: the upper bound of the value's target range

x: the number to constrain, all data types

a: the lower end of the range, all data types

b: the upper end of the range, all data types

You should see the LED grow brighter or dimmer in accordance with how much light your photoresistor is reading. If it isn't working, make sure you have assembled the circuit correctly and verified and uploaded the code to your board or see the troubleshooting section. 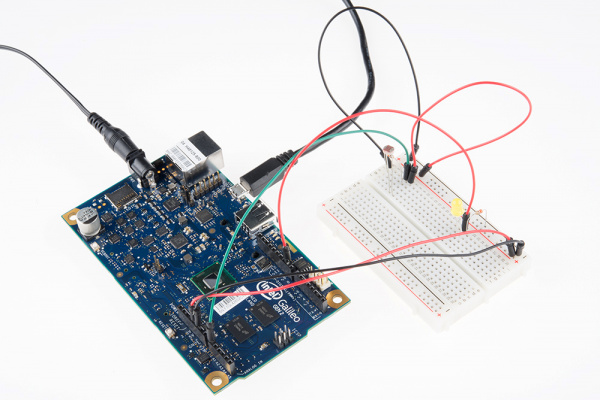 Some street lamps as well as solar walkway lights use photoresistors to detect the absence of the sun and turn on the lights.

This is a mistake we continue to make time and time again, if only they could make an LED that worked both ways. Pull it up and give it a twist.

It Isn't Responding to Changes in Light

Given that the spacing of the wires on the photoresistor is not standard, it is easy to misplace it. Double check it’s in the right place.

Still Not Quite Working

You may be in a room which is either too bright or dark. Try turning the lights on or off to see if this helps. Or if you have a flashlight near by give that a try.